Could Kevin Ollie be the Thunder's Coach-In-Waiting?

Scott Brooks is one of the NBA's most controversial coaches. With Kevin Ollie having such close ties to the Thunder, could his days be numbered?

Share All sharing options for: Could Kevin Ollie be the Thunder's Coach-In-Waiting?

In the course of our six season history, we've only witnessed two men sit in the big chair. One of them was little more than a passing fancy, while the other has become a household name among NBA fans.

That man, Scott Brooks, has been a rather controversial figure. He's gotten this team to the Finals once, the Western Conference Finals twice, and the Western Conference Semi-Finals three times. That's a decent record, but there are those that think he's holding the team back. For years, Brooks has insisted on starting offensively inept players, and refused to draw up a first-team offense that has anything more than simple plays. He's also insisted on playing grizzled veterans over his young talent, much to the chagrin of those who want to see players like Jeremy Lamb or Perry Jones III. Some might even claim that he stunted the growth of certain players by not allowing them to get out on the floor.

But there are many positive aspects to Brooks' presence as well. I can't remember a single instance of a player voicing discontent with his regime. The team has universally bought into his philosophy, and they've generally managed to stay out of trouble. He's also very good about figuring out what's worked in the past and sticking with it. I mean, aside from the shifts that have happened in the past year, the Thunder are almost the exact same type of team that they were in the Spring of 2010. You can't buy four years of success, so Scott Brooks is almost invaluable in that respect.

Still, a lot hinges on this year. Fan in Oklahoma want championships, and Scott Brooks has failed to deliver on that goal thus far. Furthermore, tactical errors made by Brooks can be blamed for some of the Thunder's past playoff losses. Some can't believe how long he refused to go small against the Heat in 2012, nor his lack of a gameplan once Russ went out in the 2013 playoffs. Should Brooks make an error or have some sort of injury befall the team (knock on wood), he could very well be in the hot seat. 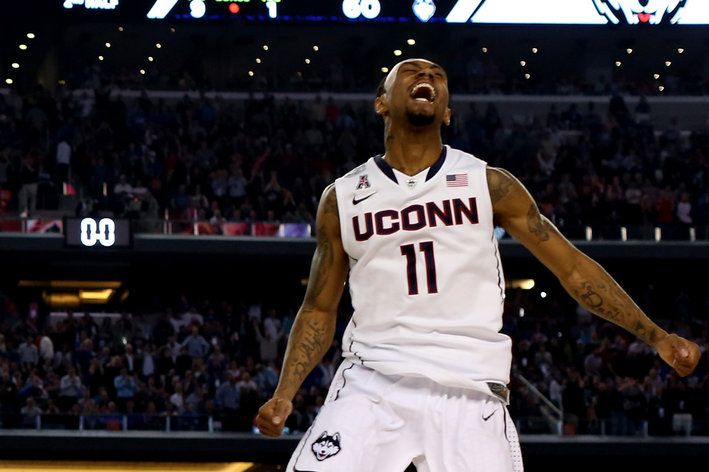 How did the Uconn Huskies win their 4th championship? Kevin Ollie is a big reason why.

Enter Kevin Ollie, current coach of the Connecticut Huskies. He's well known for winning the NCAA Title last Monday, but, he also can be accredited as being a huge part of the Thunder's success. He balled for OKC back in the 2009-2010 season. On the court, he wasn't much of a factor. He would never really hurt you with a bad shot, but was at the point of his career where it would be difficult for him to contribute much positively, either. Mostly, he ran the third team offense.

Off the court, Ollie was a much bigger influence. I've heard a few off-the-record stories from some Thunder staff, and all of them have had nothing but good things to say about him. But I don't know Kevin Ollie, so why do you want to hear from me? Here's what the Thunder have had to say about their old comrade:

Kevin Durant, via Grantland and NewsOK:

"His mindset, his professionalism every single day," Durant said. "And we all watched that. We all wanted to be like that."

"Huge," Westbrook said of Ollie’s influence. "Kevin’s one of the greatest guys I know in this league."

"He’s a great role model," Westbrook said. "He did a great job of coming in here and helping us become leaders, myself and Kevin. Just taught us a lot of things."

"Regardless of what was going on," Westbrook said, "he kept a positive attitude and taught us to do the same."

"His leadership. His determination. His passion for the game," Green recalled prior to Monday’s practice. "As you can see, he brings it all out as he’s coaching."

"Of course," the Celtics small forward replied when asked whether he expected Ollie to become a coach. "He coached while he was on the team. He’s a great motivator. As a teammate, he expected the best out of his teammates. And I can see he’s doing that as a coach."

But the intrigue doesn't stop with glowing reviews of his time in Oklahoma City. Apparently, he's had a much longer run of success, continuing to find his way onto teams based on his locker room presence alone.

Via The Sports Fan Journal:

Yet year in and year out, whether it was in Philadelphia, Cleveland, Seattle, Oklahoma City, Milwaukee, Chicago, Minnesota, Indiana, Orlando, New Jersey, Dallas or Sacramento, there was Ollie holding a roster spot in spite of his lack of offense, lack of speed, lack of height and lack of, for a better description, NBA talent.

All those years, it was a bit of a mystery to me. Sure, you’d hear about how great of a locker room guy he was, but it’s hard to stick in this league for 13 years on your locker room presence alone. But Ollie did — year after year after year, mentoring players such as Iverson, Stephon Marbury, Jamal Crawford, Jamaal Tinsley, Michael Redd, LeBron James, Andre Iguodala, Russell Westbrook and Kevin Durant.

Of course, the one problem with all of these glowing reviews is one of strategy. Sure, Kevin Ollie is a great locker room presence and motivator, but so is Scott Brooks. What does Ollie bring to the table in terms of Xs and Os?

The UConn Blog has a FANTASTIC article about his influence in that regard, and I highly encourage you to check the whole thing out of you have time. But one of the article's sections really hits home:

In four games, a grand total of zero UConn players have fouled out. In three of those games, that wasn't an issue. Against St. Joseph's, this was a gigantic, potentially season-ending issue.

For those that weren't watching, St. Joe's played an A+++ game in the first half against UConn. They didn't miss. They abused UConn in the paint. They were the far superior team. UConn had righted the ship by halfway through the second half. In doing so, three of their big men - Philip Nolan, Niles Giffey and Amida Brimah all had four fouls with 6:45 left in the game.

Somehow, Ollie juggled the lineup on a thin front line to keep them all in the game through regulation and the five-minute overtime. It was only fitting that Brimah, a freshman, tied the game at 70 with an old-fashioned three-point play on an offensive rebound.

Brooks has always been particularly skittish about moving his players outside of their normal rotations, particularly late in the game. Obviously, this is just one example of his coaching, but I could see him making a definite impact on that end. And if there's any good test as to whether a coach is tactically sound, the NCAA Tournament is it.

But obviously, we're talking about this chicken before it's hatched, and we'll have to see how Brooks does this year before we draw any real conclusions. Should Brooks fail, this could be a very interesting off-season. Rumors are swirling about teams using Ollie as bait when Durant's contract runs out in 2016. So maybe, just maybe, the Thunder will follow suit. We'll see.

What do you think of Brooks? Ollie? Let us know in the comments!