Real Plus-Minus: is it the next big thing, and how do Thunder players rank?

A new stat has been created ranking the effectiveness of a player on both sides of the ball.

Share All sharing options for: Real Plus-Minus: is it the next big thing, and how do Thunder players rank?

There has been a new statistic introduced to the NBA world, and similar to the +/- that you see in the box score, but this one focuses on the specific player.

The statistic is called real plus-minus, and to find the history of it and where it came from, check out this article by Steve Illardi. The article states that RPM is superior by:

Drawing on advanced statistical modeling techniques (and the analytical wizardry of RPM developer Jeremias Engelmann, formerly of the Phoenix Suns), the metric isolates the unique plus-minus impact of each NBA player by adjusting for the effects of each teammate and opposing player.

The RPM model sifts through more than 230,000 possessions each NBA season to tease apart the "real" plus-minus effects attributable to each player, employing techniques similar to those used by scientific researchers when they need to model the effects of numerous variables at the same time.

RPM estimates how many points each player adds or subtracts, on average, to his team's net scoring margin for each 100 possessions played. The RPM model also yields separate ratings for the player's impact on both ends of the court: offensive RPM (ORPM) and defensive RPM (DRPM).

This stat tells us how players impact their team while on both ends of the court. What makes it so different than +/- is that it is specifically based on the player. The example that Illardi uses is how one of our own, Reggie Jackson, ranks extremely high in +/- for a bench player. And this is because he is mostly playing with guys like KD, Westbrook, and Ibaka. RPM (real plus-minus) calculates the impact on both sides of the ball for one specific player and does not take into account the influence that his team has.

How do the Thunder players rank in RPM?

You would probably guess that Durant is the best in the league according to RPM. You are wrong. He isn't second, and not even third. Durant ranks 4th in the league in RPM with 6.77. And two spots below him...Nick Collison. 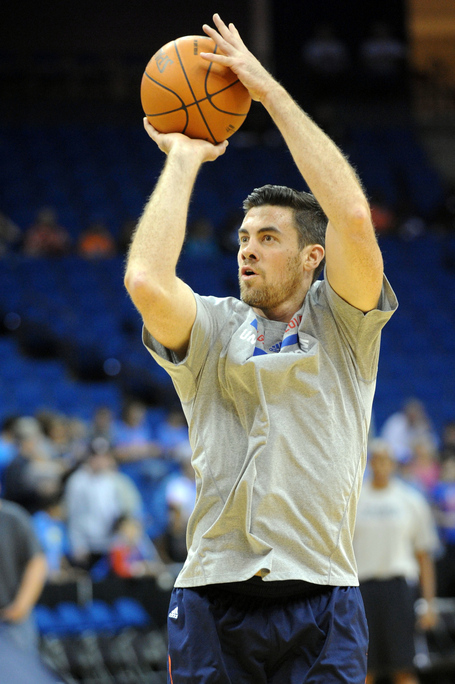 (I know right?) Collison, 33 years old 4.3 PPG, 3.6 RPG bench guy is finally noted for his value to his team on both sides of the ball when he is playing.

Russell Westbrook ranks 18th and Serge Ibaka is 42. I highly recommend checking out the attached article to learn more about this awesome stat.