Phoenix's backcourt was hot against the Thunder once again and the Suns shot 58 percent from the field.

Share All sharing options for: Recap: Thunder drops another to Suns, 122-115 in potential first-round playoff matchup

Box Score | Bright Side of the Sun

The first bit of bad news is that the Oklahoma City Thunder lost to the Phoenix Suns 122-115 on Sunday night.

The next bit of bad news - and perhaps more concerning - is that now, rather than chasing the San Antonio Spurs for the No. 1 seed, the Thunder will be clinging for dear life to the No. 2 seed as their lead over the Los Angeles Clippers has shrunk to just one game.

How the Thunder lost this one is almost a carbon copy of how they lost to the Suns back in the beginning of March, failing to defend the streaky Suns shooters and allowing them easy looks from all over the floor.

The offense wasn't too bad for the Thunder, though it relied a little too heavily on Russell Westbrook and Kevin Durant. That's not always a bad thing, but unless they are both on fire, it tends create stagnant stretches with other players mentally checking out from time to time.

That may have been the case to some degree tonight, but it's hard to complain about putting up 115 points, regardless of who scored them. For what it's worth, Durant had 38 on 13-28 shooting, and Westbrook had 33 on 12-26. That's 54 shots between the two of them for 71 points. Again, that's actually pretty stinkin' impressive, especially considering the multiple moments of brilliance both had tonight. But when you see the next-highest shot total was Reggie Jackson with 8, perhaps you wonder how sustainable that style may be in the long run.

What seemed to be the bigger issue though, just as it was in the team's previous matchup, was the Thunder's inability to get stops when they needed them most. The Suns are a lot like the Thunder in that they like to create plays on their own and hope to easy looks as a result, whether that be by driving or pulling up. If they aren't bothered by defenders, they can get hot and score at will. Which they did tonight.

That may explain why P.J. Tucker had a career night, scoring a career-high 22 points, just as his teammate Gerald Green had a career high in the previous matchup. With Tucker, you could see through his outbursts of emotion throughout the contest, clearly got better as the game went on as he became more confident that he could keep up with Durant.

Green, for his part, continued to torch the Thunder, finishing with 24 points on 7-11 shooting. In the past two matchups, he has scored 65 points on 19-33 shooting, including 13-20 from 3-point range. Yikes.

Add to it Goran Dragic, who scored 26 himself and had very little trouble penetrating the Thunder defense, and you sort of see how this one played out the way it did. Basically, that's all it boils down to. The Thunder haven't put up much resistance at all against the Suns the past two games, and the losses reflect that.

Problem is, the next time these two teams meet, it could be in the first round of the playoffs. If the defense can't get stops there, it could mean serious trouble for OKC's title hopes.

The thing with the Suns is that, unlike the Spurs, who the Thunder have absolutely figured out how to defend, they don't really move the ball all that much. They're young, they're fast, and they like to get the ball and run. If they see an open shot, they take it. If they see a lane, they attack it.

On the surface, they would appear easier to defend. Not as much worry about the extra pass means more opportunity to focus on your guy and keep him locked down.

Where the Thunder are getting themselves in trouble is in failing to keep up with their man off the ball. Even though the ball isn't moving side to side as much, the team obviously still is. Just because the Suns are 29th in the league in assists doesn't mean they aren't in constant motion. As mentioned, they're a lot like the Thunder in that they just trust their guys to create a lot more, only they rely on a lot of off ball movement as well. Doing that allows them to get the defenders on their heels, which makes make driving to the rim and catching the defender off balance that much easier, as well as giving a better look at a pullup jumper if the defender can't gather in time for a closeout.

So just because the Suns aren't passing as much, the same energy level is still required against a team like the Suns, just in a different way than the maniacal closes and banshee-like arm waving to clog passing lanes. Rather than clogging those lanes and flying out on shooters, they need to instead channel that energy to fight through the screens that the Suns are constantly setting. It also makes communication on pick-and-rolls that much more important as both defenders need to be on the same page for a switch. Remember, the Suns are the best in the league in pick-and-roll offense.

Simply put, the Suns are no fluke, and they're absolutely capable of pulling a playoff upset if you don't approach them with enough energy.

That inability to defend their man. I wanted to write something this weekend examining just how disruptive Serge Ibaka was becoming as an interior defender. Both the San Antonio and Houston games from Thursday and Friday were perfect illustrations of how his presence can disrupt an entire offensive scheme. For whatever reason (a.k.a I got lazy) I didn't write the piece, and now it's almost irrelevant, because Ibaka was almost nonexistent as a paint defender tonight. He didn't record a block, and the Suns had no trouble scoring inside tonight. Take a look at their shot chart: 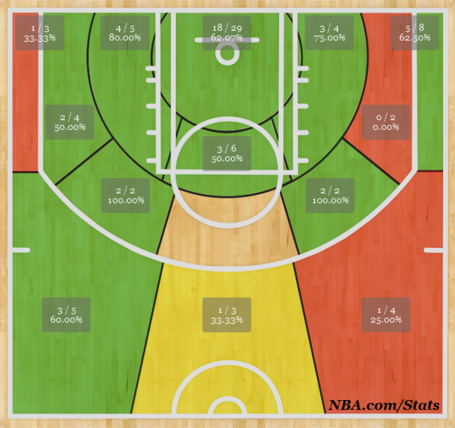 Now, this isn't to pin the entire thing on Ibaka. The perimeter defense was just as shaky from all involved, allowed dribble penetration and other open looks, but the Suns didn't have that inherent fear that Ibaka instilled in the Spurs and Rockets in those two games.

Royce Young of Daily Thunder had a great observation on Ibaka during the game, saying Ibaka sometimes gets too reliant on his shot blocking and gives guys looks at layups so that he can try and swat them away. It works from time to time, but it wasn't tonight, and when the Thunder needed Ibaka to step up and absolutely deny the inside, he was instead giving Dragic or the other penetrators that extra step to get off a look. Then, when he wasn't blocking it, the result was an easy layup and two points.

It's one component of defense, yes, but as seen in the Spurs and Rockets games, it can absolutely alter an offensive gameplan. It's something analysts love to harp on that playoff basketball is all about who can play inside and make the physical plays. Controlling the paint on defense in big games is how you win when it matters most, and efforts like tonight won't cut it in the playoffs.

Let's go with 3-point shooting. The Suns were 11-23 (48 percent) while the Thunder were just 9-32 (28 percent). It seems to be becoming a habit for the Thunder to shoot a lot of threes lately. Is it fatigue? Maybe.

Durant took 15 himself, which is certainly out of character. It was a career-high and, in fact, he's only ever attempted 10 or more 12 times in his entire career. In his defense, a lot of them were open looks, as the Suns seemed willing to play off him just enough to prevent his increasingly-lethal penetration skills. Still, there were a few that were forced.

More than that, with the team trailing heading into the fourth, it seemed like Durant made a conscious effort to start getting to the rim more. Driving in for a 9-foot bank shot and then completing a nice drive and dish to Collison shortly thereafter. And it worked, giving the Thunder their first lead of the second half.

But then, as the game went on, and again maybe as Durant grew more fatigued (he played 43 minutes tonight) he once again started settling for threes.

It's not that threes are bad, and against a hot team like the Suns were tonight, you're going to need them to keep up. But it's the way they felt forced that put the Thunder in a hole from time to time, as they seemed too focused on getting the homerun threes to bring them all the way back rather than trusting in each other to work the ball in a little more and create easier looks to slowly but surely chip away at the lead.

As mentioned at the start, the Thunder's lead over the Clippers is now just one game. The good news is that they are two up in the loss column, so assuming the Thunder takes care of business in Sacramento on Tuesday, they will head into Los Angeles on Wednesday still with two fewer losses than the Clippers.

However, drop that game Wednesday to the Clips, and all of a sudden you have just one less loss, and the Clippers would also own the tiebreaker, putting that much more pressure on the remaining regular season games.

The Thunder can kiss the one seed goodbye, but it would still be nice to be entrenched in that two seed and give KD a game or two off at the end. Again, he's a freak of a basketball player and he's only 25, but if fatigue really is playing a role as it appeared to be against the Suns, having an extra few days off before the playoffs can only help him and the rest of the Thunder. A huge, huge game against the Clippers on Wednesday, but gotta take care of business against the Kings first.

One last thought that just popped up last second after I wrote this whole thing. An interesting quote here from KD on passing Michael Jordan's streak of 25+ point games via Darnell Mayberry:

Durant on passing Michael Jordan's streak of 40 straight 25-point games: "I don't really care about it. I wish it was over."

Maybe it's not necessarily physical fatigue, but mental fatigue from KD? Who knows if he feels like he has to go out and hit the 25 point plateau every night. Based on the way he plays, it's almost certain that he doesn't. Still, a quote like that makes you think it's obviously on his mind. Something else to consider during this stretch run that seems to be neverending.

Basically, can we just get to the playoffs where stats don't matter?!

He continues to bring that relentless energy that has defined him his entire career. And it's reassuring that the injuries obviously haven't affected the way he plays the game.

There are certain teams that just make Derek Fisher look old. The Suns and their strong, long, sharpshooting guards are one of those teams.