Game 5 recap: Thunder on the brink of elimination, fall to Grizzlies in overtime, 100-99

In another overtime thriller, the Thunder failed to finish off the comeback as Serge Ibaka's putback attempt came just after the buzzer.

Share All sharing options for: Game 5 recap: Thunder on the brink of elimination, fall to Grizzlies in overtime, 100-99

Another overtime.  We should just forget about these individual recaps, every game is the same!

Things just got real for the Thunder as the Grizzlies took the fourth overtime, 100-99. It was a thriller of epic proportions, but isn't every game in this series epic?  This game started off on a different foot, though.  With Kevin Durant hitting his first shot and Russell Westbrook starting off with a handful of points, I honestly believed the Thunder's offense would help grab the win.  But no matter how many points the Thunder were scoring, Zach Randolph was scoring more.

Throughout the game, the Grizzlies pulled away and were unable to hold onto their 4th quarter lead, once again.  The Thunder tied the game up with a Westbrook steal and dunk as time winded down.  As time expired, Z-Bo hit a layup but was half a second after the buzzer, which certainly caused lots of sighs of relief throughout Loud City.  Those quickly disappeared as Mike Miller made his first 2 three pointers early in the extra quarter.  The game ended with a missed shot by Durant and a late put back for Serge Ibaka.

The Thunder are 1 game away from elimination which could potentially cost Scott Brooks his job among other things.  The series will be heading back to Memphis for OKC's most important game yet.

Here we go again.  Not only did the Thunder fail to shoot efficiently, but they failed to defend as well in the first 2.5 quarters.  Mike Miller looked like he was in his prime, hitting threes from all over the court.  Zach Randolph was an all-powerful weapon of offense and defense and seemed as though no one can stop him.  Kevin Durant failed to produce with shooting and Westbrook shot under 30 percent.  Nothing had changed.

In Appreciation for Grizzlies vs Thunder 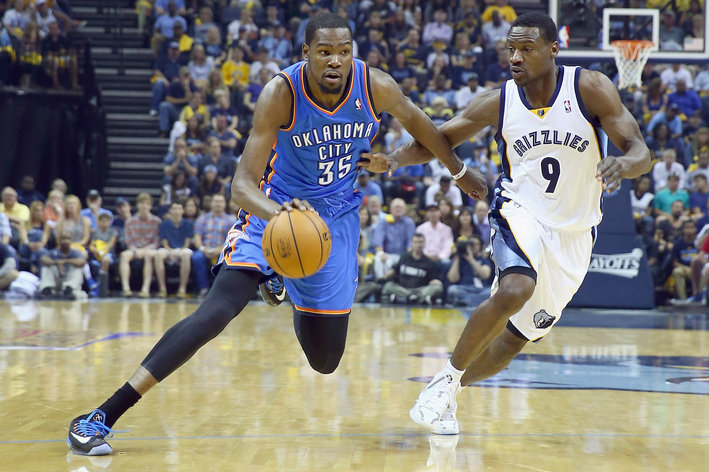 It has been a wild ride so far. Is it going to have an unhappy ending for Durant & the Thunder?

The game started off well with the Thunder looking like that they had more confidence in scoring points.  As the game progressed, the shooting got worse, and worse, until the Grizzlies pulled away in the 3rd, leading by 20 points, 72-52.  But just when you expect it to happen, as the game winds down, the Thunder come back, sending the game to overtime for the 4th time in a row.

This game should have been won. With 26 seconds to go and OKC down by 2 points, Durant was sent to the foul line and made his 1st free throw.  By now, the game was a one point contest and as KD winded up...Official Joey Crawford stopped him to fix the scoreboard.  What is going on here?

This might have thrown Durant out of his groove as he missed the free throw that would have tied the game.

The Thunder managed a stop at the other end, which gave them a chance to win with 2.9 seconds remaining. You would think that the coach would set up a play filled with movement and screens and misdirection and the whole to do...but you know Scott Brooks!  So here is how the play went down:

Pass the ball to Durant so he can take a contested shot 28 feet from the rim.

As for my reaction, I was not surprised...at all.

Shooting and defense.  The Thunder's field goal percentage has been a substantial and evident issue throughout the series, and it did not change much in Game 5.  Durant took too many contested shots, missed the ones that he had wide open, and Westbrook shot way too much (30 attempts).  Defensively, OKC failed to contest Mike Miller outside the arc, and he took 8 threes and made 5.  Tayshaun Prince was allowed too many scoring opportunities in the 1st quarter and Mike Conley basically ran through the defense, converting on critical drives late in the game.

17 turnovers.  The Thunder turned the ball over 17 times and gave up 15 points from the TOs.  This can be due to the stifling D of the Grizzlies or the offensive sloppiness.  It was bad, really bad, especially late in the game when both Durant and Reggie Jackson saw the ball simply taken away from them in key spots.

The Thunder may get eliminated next game.  For Scott Brooks, this may be the end of the line.  For the rest of the team, it serves as extra motivation to go and grab that win.  They need to come out next game and take smart shots, be aggressive on defense, and cut down the turnovers, or the season may be over for OKC.

Thunder Down Under: Russell Westbrook (just because he got a triple-double, his FG% and TO's were too bad to give him the Thunder Wonder)