What is missing in this crazy series between the Thunder and Grizzlies?

The OKC Thunder are not playing top notch basketball. What has been missing?

Share All sharing options for: What is missing in this crazy series between the Thunder and Grizzlies?

I think it is safe to say that this first round series has not panned out as planned.  Three overtimes, two four-point plays, and the series is tied 2-2.  There's a coach coaching for his job (and not the one you would have predicted), a player fighting for his right to be recognized as the world's best basketball player, and some bench players working to make a name for themselves in the big leagues.  Most basketball fans expected to see Kevin Durant tear apart the Grizzlies' stifling defense, but instead find themselves watch KD rush shots and shoot a lot of threes in desperation.  The same applies for Durant's counterpart, Russell Westbrook.

While the Thunder have put on a competitive show for us fans, this series has become too surreal to be ignored.  Despite the tie in the series, it seems as though the Grizzlies have the tighter grip on the games.   Coach Dave Joerger has solved the equation as to how to stop the steamrolling OKC offense.  The Thunder do not look like the team they were back in the regular season.  What is missing from this Thunder postseason team?

Now hear me out, the Thunder were never a great team from behind the arc. We knew this from the very beginning of the season when OKC failed to address this weakness, and we're seeing it play itself out now.  With the exception of Durant, Westbrook, Butler, and the occasional three from Sefolosha, OKC was subpar from downtown.  In nearly every aspect of offense, the Grizzlies have offensive solutions vs the Thunder, except for shooting.  Memphis has a strong interior defense and great pick and roll D, yet, their perimeter defense does not quite measure up to their other strengths.  Where the Thunder had an opportunity to sink their opponents with dead eye shooting, they choked and have been flat.  As seen on the shot chart, the Thunder have not shot well from anywhere on the court. 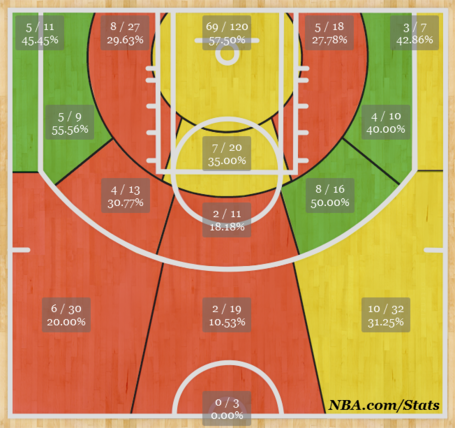 And from the three point line, only corner threes have been successful shots ...remember this one?

Other areas around the arc range from 10.53 percent (directly straight from the basket) to 20 percent.  The Thunder have gone from the 14th best 3 point percentage shooting team in the regular season to second worst in the post season.  As for the three point shooters, Durant has been held to 26.5%, while Westbrook...19.4%!!!!

The bench, oh the bench.  Through 4 games, the benches of Oklahoma City and Memphis have been different...much different.  Before Game 4, where Reggie Jackson had the game of his career, the Thunder bench had no spark, no leaders, and no contribution to the team.  Reggie Jackson could not hit a shot, Steven Adams lost a substantial amount of floor time.  Scott Brooks decreased the rotation, excluding Steven Adams, Jeremy Lamb, Perry Jones III, and Hasheem Thabeet, and the players involved in the rotation either received small minutes or contributed nothing to the team.  On the other hand, the Grizzlies bench has been fire.  According to mySynery Sports statistics, the Grizzlies bench leads the OKC bench in scoring, rebounding, and steals.  The scoring has been the X-Factor in this series.  Here is how these two benches compare:

The Grizzlies bench has scored 30 points more than the Thunder bench.  Bench production is a necessity in order to win this series.

The Thunder are not known for running through plays set up for scoring options.  I guess when you have the best scorer on your team, the goal is to get the ball in his hands.  This series is different.  Tony Allen has been Kevin Durant's kryptonite and has been suffocating KD's offense to the point where Durant is now missing open shots when Allen isn't even guarding him.

Watching the game, it seems as though the only play in Scott Brook's playbook is "Westbrook- run around, shoot, or pass to Durant."  Quite frankly, that play is not working anymore.  Scott Brooks should encourage some more pick and roll play, because in game 1, Mike Conley could not escape Kendrick Perkins' screens.  Also, Serge Ibaka could be a huge help if he was included in the offense more.  He can hit mid range shots and post up, so having another option would only help OKC.

These three missing pieces would send the Thunder straight to the Promised Land if they returned.  It is easier said than done.