Can Brooks guide Durant and Westbrook to a championship, or is he inhibiting their success?

Superstars are an important element in winning a championship in the NBA, and the Thunder have two. Can Scott Brooks be the coach to lead them to success?

Share All sharing options for: Can Brooks guide Durant and Westbrook to a championship, or is he inhibiting their success?

Is Scott Brooks wasting his superstars?

It's almost silly to think of it this way, especially when the Thunder just recorded a third straight season with a winning percentage above .700, but the fuel for the debate has always been there. Now, there's a spark to turn it all into flames as the Thunder struggle to get out of the first round against the Grizzlies.

At some point, we've all heard some intense criticism of Brooks and his unimaginative offensive playbook. We might even have been critical about it ourselves. Brooks has never gotten creative with getting his guys in scoring position, and with Kevin Durant and Russell Westbrook on his team, there's just not really any urgency for him to work that in. Durant and Westbrook, by talent alone, are in scoring position as soon as they get within 30 feet of the basket. Those are guys that can carry an offense, and they have: Brooks' team has ranked top-six in offensive rating in each of the past four seasons.

It is hard to complain about Brooks' offense when he's winning games, but right now with the Thunder struggling against the 7th-seeded Memphis Grizzlies, the criticisms are as loud ever. Late-game scenarios have seen failed hero-ball one-on-ones leading to a contested shot jacked up late in the clock by Durant or Westbrook. Any random possession can start and end with Westbrook or Durant pulling up for a contested 25-footer after dribbling down the court. There's rarely any motion on the court to help Durant or Westbrook, and it often feels like Brooks' only offensive strategy is "get the ball to Durant or Westbrook."

Forget that the Grizzlies aren't history's typical seventh seed, and forget that they're one of the best defensive teams in the NBA. Forget Tony Allen taking his defense to the next level of mental focus that it needs to be at for him not to be a double-edged sword. More than what's happening on the court right now, this is the awakening point for critics to fully voice their frustrations held against Brooks and his basic offensive formations.

Superstars in the NBA are rare and they correlate with success. Teams like Daryl Morey's Houston Rockets spent years stockpiling assets to make a run for one, while others tank their way to the bottom of the standings to get an opportunity to draft one. History has shown teams almost always need at least one of the league's top-5 players to win a ring (the 2004 Pistons might be the lone exception).

Is Scott Brooks coaching for his job? 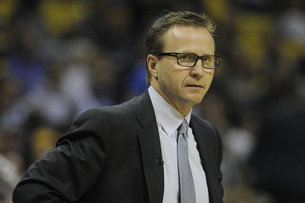 As the pressure mounts, does Coach Brooks need to be afraid that his job is on the line?

Take a look at the Thunder. You can call it everything falling into the right place at the right time, or you can call it diligent scouting, drafting and player development, but regardless of how it happened, they found themselves with Kevin Durant and Russell Westbrook. They have two of the NBA's ten best players and both are 25 years old. The reason why "the Thunder model" is so highly regarded isn't because of the things they did, but because of how those things turned out: two NBA superstars in their prime. Teams spend years positioning themselves just to make a run at that kind of core. The Thunder have it, and they've put it at the hands of Scott Brooks.

I personally like Brooks. Maybe he was blessed by a front office that granted him not only two superstars but also diamond-in-the-dirt prospects that fit into the right defensive scheme, but player development and defense have both been areas of strength for this team for a long time. Combining successful player development and defense with two offensive juggernauts sounds like a plan for success to me, and whether it was him or the front office, if it ain't broke then don't fix it.

Still, watch the Thunder in this series and patience with Brooks can wane very quickly. Defense and player development gets thrown out of the window when you see the Thunder shooting a series field goal percentage of 39.9% through the first four games.

They have Durant and Westbrook! How does this team shoot worse than 40%? That's crazy!

Look at this play from the end of Game 3. There's no subtlety or misdirection here, it's exactly what you think it is. "Get the ball to Durant or Westbrook."

We've seen this play before: if Durant can't score 1-on-1, give it to Westbrook so he can try. Being Tony Allen, Tony Allen tips the pass and forces Westbrook to jack something. However, anyone can realize the ball is going to Durant and act on it with such an obvious set-up.

In other situations, there's this sort of play: a basic action featuring minimal helpful motion that is supposed to free up an open shot for one of Durant or Westbrook, but ends up looking more like an edgeless attack.

The Thunder go with the Westbrook/Collison pick-and-roll, and the idea is that it's supposed to either lead to a Westbrook score at the rim or suck the defense in and draw Durant an open look from three. Westbrook and Durant are good enough offensive players to score off that basic type of play if it frees them even the briefest window of opportunity, but when it doesn't work, it ends up with a contested shot out of a half-heartedly conceived set. That's basically the statement to make about Brooks' offense.

When the Thunder play the league's best teams in the playoffs, and the Grizzlies are at the very least one of the NBA's best defenses, Brooks is going to need to swing with heavier stuff to score consistently. With shots like these, is it even surprising that Durant and Westbrook have combined to shoot 37.3% from the field and 23.1% from three?

The gut reaction for anyone watching the Thunder play as they have is to finally let the frustrations held within about Brooks' offense loose. They're struggling now, so now is the time to blame him because what he's doing isn't working. Whether the problem is his offensive strategy or him not holding his stars accountable for lazy off-ball play, Brooks is the one in charge and he should be the one getting things straight.

The Thunder have two superstars, and now they need to perform up to the expectations of a team with two superstars. This is a contending team with championship aspirations, and if they don't live up to expectations, Brooks' job will be on the line. With superstars as rare as they are in the NBA, it would be irresponsible of the Thunder to "waste superstar talent" by putting them at Brooks' disposal.

I'm sure that's how some people feel, at least. My own opinion isn't fully developed yet. As I said before, I like the success that Brooks has brought so far. The Thunder have been elite on both ends on the floor in recent years, and even without a championship to their list of accolades, there's plenty to like in their performance and what it's earned. It's within reasonable belief that they could win a championship as they are, and to me, that's plenty of reason to give Brooks some relief (if not credit him for all the things that have gone right under his guidance).

Right or wrong, however, Brooks' job is on shaky standing right now. As good a team as the Thunder have been, they haven't won a championship yet. If they lose to the Grizzlies in the first round, a real possibility right now, then Brooks' seat gets even warmer. Durant and Westbrook will both be 26 shortly after the start of 2014-15. Durant's contract ends after 2015-16, while Westbrook is up after 2016-17. There's no guarantee that either will return, especially if the Thunder can't find championship success before then.

Brooks has done things well, but at some point, the front office has to stop being satisfied with the ingredients for success and actually start looking for the results. At some point, the front office will have to stop saying "if it ain't broke then don't fix it", and start shuffling the deck for a better hand. Maybe George Karl or a Van Gundy brother is a better fit for this roster. Making that consideration is fair to me. The Thunder will need to decide when they reach the point where they seriously consider acting on it.

So with that in mind, the rest of this series, and should they advance past the Grizzlies, the rest of the playoffs, hold great weight for Brooks' and the Thunder's future. Can he take this team where they want to go,? Durant and Westbrook are players with talent bound for title success, but that isn't happening when they're jacking contested 30-footers.

To be fair, Brooks should have a bit of a context cushion to fall upon. There are little issues surrounding the roster's construction that are making his job a bit more difficult than it needs to be. His team desperately lacks three-point shooters to space the floor for its stars, which is part of the reason why Durant and Westbrook are forced to jack 30-footers. The bench that looked so deep early in the season and fed into the high expectations for the team has disappeared, as a youth-powered second unit has not-unpredictably faltered in the playoffs.

By now, however, this is no longer about the little things. This isn't about player development, defense, or even offense. This is about having Durant and having Westbrook, and whether or not having Brooks with them can equal a championship. For the Thunder, the pressure of decision time is starting to make itself felt.