Is Thunder head coach Scott Brooks fighting for his job?

Questions have been tossed around about the potential firing of Scott Brooks, are these rumors true?

Share All sharing options for: Is Thunder head coach Scott Brooks fighting for his job?

The playoffs have not been so nice to the Oklahoma City Thunder.  After Game 3 and another overtime loss, OKC has let a second game slip between their fingers and into the hands of the Memphis Grizzlies, who have proven that they are much more than a 7 seed.  Through these 3 games, questions have been brought up corresponding with Coach Scott Brooks' controversial rotational decisions, distribution of minutes, and play calling.  These could be the reasons as to why the Thunder are down one game to a 7 seed, but then again, the former Coach of the Year could be doing what he's been told.

After a journeyman playing career and several years as an assistant coach, Scott Brooks took form into the head coach and looked prepared to take the reigns of the Oklahoma City Thunder.  Throughout the years as coach, Brooks has experienced it all: missing the playoffs, a first round buy out, a conference finals loss, and a Finals defeat.  At first, the playoff failure was a sign that the future holds great things, but now, the fans have had enough. (So has Russell Westbrook's brother!) 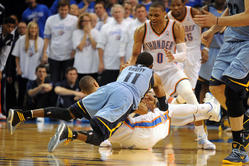 Summary or blurb about the related article

According to mySynergy Sports data, the Grizzlies' bench far exceeds the Thunder bench in scoring, threes, rebounds, and steals.  This may be due to the number of players in the rotation.  Dave Joerger, coach of the Grizzlies, rotates a large group of players who all get a sufficient amount of time to contribute.  Whereas Brooks keeps a small rotation of four players while keeping their minutes down low yet increasing the minutes of players like Thabo Sefolosha and Kendrick Perkins.  Both players have not seen these many minutes since...ever!

This whole season, Brooks has been credited with handling the rotations poorly.  On most nights, Coach would play Caron Butler an excessive amount despite his poor shooting, keep Steven Adams on for a minimal amount of time, and leaving Jeremy Lamb sitting in despair.  If Brooks was keen with distributing minutes, he would realize putting in players like Adams, Lamb, and Jones III would deteriorate the opposing defense in more ways than one, especially against the Grizzlies.  Tony Allen has been forcing Kevin Durant into rushed shots and has been making it hard for the Thunder to get him the ball.  Jeremy Lamb is fantastic in isolation.  With Lamb on the court, he could penetrate the paint, leaving Allen committed to help defense, also leaving Durant some breathing room.  With Steven Adams, Coach Brooks could give Kendrick Perkins some rest while keeping the defensive intesnity.  Adams also provides more offense than Perkins would.  Keeping 4 guys in the rotation (Derek Fisher, Caron Butler, Nick Collison, and Reggie Jackson) does not help the team in any way.

On the other hand, the Thunder's half court offense has been somewhere other than on the court.  With Tony Allen locking down Durant, there leaves no set play to run.  Brooks should have a play prepared to run in case of the inability to reach Durant.

These first 3 games have been disappointing.  For the next few games, Scott Brooks just might be coaching for his job, so it will be interesting to see the schemes that he attempts in these next few match ups.