It seems like a silly question to ask. Obviously, Kevin Durant is much better than Tony Allen on paper and in practice. KD is one of the game's best players, while Tony Allen is an old defensive specialist on an above average team. Meanwhile, KD has seen a ton of success while playing Tony Allen's team, and has hit some incredibly difficult shots while Allen has been on the floor.

But the stats and highlights don't show everything. With Allen on the floor, Durant has been far less effective than he usually is. Allen's high-intensity and high-physicality style appears to be Durant's kryptonite, and we've seen more and more of him as the series has progressed. The failure of Allen's counterparts has helped his cause, as Prince and Johnson were woeful when attempting to guard KD. By the end of Game 2, Durant had ceased to be the main focal point of the Thunder's offense. A lot of the shots that he took came in transition, and it was clear that Allen had a visible effect on Durant's game.

Of course, a lot of fans don't see KD's Game 2 slide as a victory for Tony Allen. Some like to see it as Russell Westbrook's fault. He ended up taking twelve shots in that fourth quarter, only making four and never getting to the line. Some of the shots Russ took were pretty wild, but I can't really blame him for his aggressiveness. Half of the time, he was matched up against third-teamer Beno Udrih. The other half of the time, he was matched up against the bigger Courtney Lee, so he had a definite quickness advantage. I am disappointed that Russ didn't hit more shots given those circumstances, and I'm also disappointed at how little he went to the rim. But his willingness to carry his team's offense was well warranted, especially after KD had taken so many shots up to that point.

Anyway, when you look at Monday night's game, it should be obvious what strategy Memphis' is going to pursue tonight. On the KD front, we shouldn't see anybody guarding him but Tony Allen. Prince has been a total failure in that regard. Tayshaun should only see time if Memphis wants to experiment with tiring KD out on the other end of the floor, as he still has a very limited ability to score off the dribble. That experiment didn't go well in Game 1 though, so it should be all Allen, all the time.

When it comes to guarding Westbrook, the Grizzlies will probably rely on Courtney Lee to get the job done. Lee and Conley have traded duties defending Russ, but Lee has been the more effective of the two. Conley is simply too small to bother Russ' shot. Lee hasn't really been ultra-effective at wrapping up Russ, but he does deter Westbrook from getting to the rim.

As a result of this cross-matching, Mike Conley will likely spend time guarding Thabo Sefolosha. I was hoping that something could come of this, because Thabo can be effective when posting up smaller guys on the baseline. But no such play has been drawn up so far, and Conley has been rather effective at keeping the ball away from Thabo.

Speaking of Thabo, he seemed to get a lot more minutes in Game 2. Brooks' minute distribution can be a total mystery sometimes, as brought to my attention by commenter existingmate: 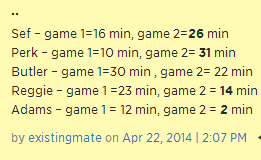 This shift in minutes really doesn't make a lot of sense. Brooks likes to play the starters together a lot, but if you look at the Popcorn Machine for Game 2, you'll see that Thabo/Perk lineups weren't exactly effective up to that point. Perk, despite his amazingly awesome game-saving shot, hasn't been very effective at wrapping up Gasol or rebounding the ball in this series. Meanwhile, Sefolosha's effectiveness is limited by the lack of a need for perimeter defense. The Grizzlies' don't really have a off-the-dribble scorer on the wing, so the most Sefolosha can hope for is a few well-defended threes and transition points.

On the other hand, it's not like Brooks had a lot of options to replace Sefolosha and Perk. Caron Butler wasn't having a particularly good night, taking few shots and generating little offense. Meanwhile, Reggie Jackson was a complete disaster. He bricked a couple of open shots and blatantly allowed Beno Udrih to burn him on defense. I don't want to take anything away from the talents of Udrih, but Derek Fisher could have done a much better job guarding him than Jackson did. Udrih simply spotted up for easy shots while Jackson couldn't fight around screens. I don't know what else to say, but Jackson probably deserved to sit. Meanwhile, Adams is a much more viable option, and I think his presence in Game 2 could have tilted the needle in the Thunder's favor.

Also, I have another point to make about minutes, but instead of making it, I'll just say..... Baa times three. Two great players sit on our bench.

Regardless, let's talk turkey. If the Thunder are going to win tonight, they're going to need to play D. I wouldn't expect Memphis to put in a Game 2-like shooting performance ever again, especially with dudes like James Johnson not even getting minutes. The Thunder are going to need to outscore Memphis, and they simply aren't good enough to do that in half-court sets most of the time. The Thunder have too few true distributors and off-the-dribble scorers, along with too many offensive black holes.

Instead, they'll need to kickstart their offense with some awesome defensive skill. Memphis doesn't move the ball a lot, and their offense is centered around the rim most of the time. So trying to generate turnovers generally won't work, aside from a few backcourt miracles. Really, the flow of the game centers around the team's dominance of the paint, and their ability to generate points off of crazy blocks and rebounds. That makes Brooks' willingness to go small in Game 2 (something he never did in Game 1) all the more puzzling. Hopefully, he'll see more sense in size tonight.

At the end of the day, I think the Thunder will take this one. The Grindhouse is tough and the Grizzlies can certainly still win this series, but OKC just has too much scoring power for Memphis to handle. Plus, KD could be in for a scoring breakthrough tonight if he simply posted up Tony Allen. I mean, he's got 7 inches on the dude. Get grimey, but not gritty!

What do you think of tonight's game? Drop a comment and let us know!