Russell Westbrook's impact on and off the court: how do the numbers add up?

What makes Russell Westbrook so important to Kevin Durant? Check out the latest scoop from our guest number cruncher, Swetha Prabhakar, to understand the magic behind Oklahoma City's dynamic duo.

Share All sharing options for: Russell Westbrook's impact on and off the court: how do the numbers add up?

WTLC would like to introduce Swetha Prabhakar. Swetha first tried her hand at baseball when she was five, but she was held back in tee ball twice. One thing led to another and basketball became her favorite sport. She grew up hating math but eventually graduated from Stanford with a bachelor's in applied mathematics and a master's in operations research because of her love for sabermetrics. She recently left her job crunching numbers for Facebook to spend more time focusing on her next adventure in the area of sports and technology.

You can find Swetha's work at her personal site, Fanvana. She has been featured at both Clips Nation as well as Pounding the Rock. You can follow her @swaythuh.

Last year, the Memphis Grizzlies knocked the Westbrook-less Oklahoma City Thunder out of the playoffs in the Western Conference semifinals. This year, the two meet again the in the first round with a Russell Westbrook who appears to be firing on all cylinders (early returns are positive). Oklahoma City is the clear favorite in this series, but it will by no means by an easy first round matchup. In fact, this is the perfect time to understand what exactly Russell Westbrook brings to Oklahoma City and how he helps the Thunder win. We have all witnessed his speed, strength, and crisp passing on the court, but how can we quantify Westbrook's contributions?

With Westbrook on the court, the Thunder scored 49% more fast break points, 6% more points in the paint, 11% more points off of turnovers, and 6% more second chance points per possession during the 2013-14 regular season.

Though lineups with Westbrook in them attempt 14% fewer three pointers than those without him, he averages 4.7 attempts per game (career high),  the second most  on the team (behind Durant) for the Thunder (I will explain why this is later.). Westbrook is also third in the league at the number of pull up 3's attempted per game. His penchant for shooting from long range is particularly evident in Thunder losses. During wins, roughly a quarter of Westbrook's field goal attempts come from long range; this distribution shifts to nearly a third (32%) in losses. In particular, when shooting from long range, he goes for the "above the break" three 93% of the time. He shoots a mediocre 31.5% from this spot.

Fun fact: He was 0-for-5 from this zone on Saturday.

While evaluating the value that Westbrook adds to the Thunder, it is important to note the combination of players that he spends the most time with on the court. Coming back from his third surgery this season, Westbrook has been on a tight minute restriction, altering Scott Brooks' rotations from prior seasons. Here is a breakdown of what percentage of minutes he spent with each teammate during the 2013-14 regular season (Please note: Since he has four teammates on the court at a given time, the percentages will not add up to 100%): 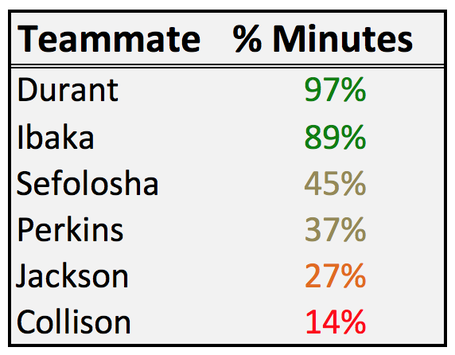 The Thunder is a much better three point shooting team with Westbrook off the court, leading to an overall higher eFG%. This is because the top 3 shooters on the team are: 1. Caron Butler, 2. Kevin Durant, and 3. Derek Fisher. However, Westbrook only spends roughly a quarter of his playing time with either Butler or Fisher also on the court. Thus, though Westbrook does average the second most attempts from long range for the Thunder, this would help explain why lineups with him shoot fewer threes on average per possession.

Consistent with Westbrook's quickness and ability to attack the rim, Durant lineups with him in them average 10% more free throw attempts per possession than those without him, implying a higher level of aggressive play. At the same time, the Thunder average 13% more assists with little impact on turnovers with both Westbrook and Durant. Taking this analysis one step further by looking at some more advanced breakdown of scoring (see chart below), it is safe to say that Westbrook's presence on the court greatly impacts the Thunder's style:

Westbrook helps put more hustle points on the board. He provides Durant with the biggest gain on fast break points of all Thunder players who play big minutes. He also provides them with a significant lift on points off of turnovers and 2nd chance points. (Interestingly, Perkins provides the biggest percentage lift for points in the paint.)

This is the result of Westbrook's speed, strength, and court vision. For the Thunder, this translates to both Westbrook's shot distribution and his passing. In fact, 28% of his points come from the fast break. (For context, only 11% of Chris Paul's points are FBPs.) However, when you look at just raw passing, Westbrook's numbers are not that impressive compared to other marquee guards in the league. Here is a summary table of key passing-related stats per game during the regular season: 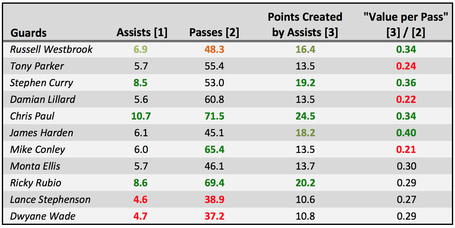 Westbrook's passes imply a strong efficiency if you look closely at the resultant points from his passing. By doing some very basic back of the envelope math (points created by assists per game/passes per game), we can get a very raw sense for the value per pass. (Obviously, the danger with this method is that it puts teams with very strong overall ball movement, like the San Antonio Spurs, at a disadvantage.)

This calculation implies that the top four most "efficient passers" from this list are: 1. James Harden, 2. Stephen Curry, 3. Chris Paul, and 4. Russell Westbrook. There is a pretty big drop off after that.

However, with all of this upside that Westbrook provides on the offensive end, his defense could improve this season. His backup, Reggie Jackson, who has really helped keep the Thunder on track in Westbrook's absence, has provided more utility in this capacity. (It helps that he is a rare 6'3" guard with a 7'0" wingspan.) Lineups with Durant and Jackson allow almost 3 fewer points in 100 possessions and force 13% more turnovers than those with Durant and Westbrook. Jackson helps bring opponent three point field goal efficiency down by 2.4 percentage points and cuts opponent fast break points by 22% per possession. It will be interesting to see if Brooks plays Jackson and Westbrook together more often in the post-season, given the two potentially have very complementary skillsets.

Regardless, Westbrook has a chip on his shoulder from last year's post-season and a quick and painless victory against the Grizzlies would certainly help. Kevin Durant was able to get the Thunder to the second round last year. Let's see if the dynamic duo of Westbrook and Durant can take them all the way this time.