Beyond The Thunder Arc: Thunder Sealab 2014, someone is crushing on Kiwi Adams, selfies abound

Checking in on who did what to whom for the boys from Loud City and the rest of the NBA. Oh look, a sea lion!

Share All sharing options for: Beyond The Thunder Arc: Thunder Sealab 2014, someone is crushing on Kiwi Adams, selfies abound

It has been a very interesting week or so for the Thunder, more-so off the court than on the court. The Thunder continue to play out the string with less than a dozen games remaining and have some pretty amazing highs and some head scratching lows (blow out loss to Dallas a week ago), but for my money the best thing going for this team was their trip to the local zoo.

Seriously...I want to see the next 60 seconds of this video because I guarantee Perkins elbowed the sea lion and gave him a death stare while cursing out his weak-a$$ defense.

Am I the only one that freaked out when I saw this video?

WHO LET WESTBROOK GET THAT CLOSE TO A SLIPPERY WET SURFACE WHEN HE HAS HAD KNEE ISSUES AND WHY HASN'T HE BEEN FIRED YET? If I was the Thunder I might explore wrapping Westbrook in bubble wrap when he isn't playing in games. I would at least go all Little Giants with him.

I think I see the new "It" couple that will take E! News by storm

@RealStevenAdams you are the best. good luck on ze court! pic.twitter.com/gouhVH9vFI

I can watch T-Mac footage all day

I am beginning to think Reggie Jackson and I should be best friends. I can't think of many reasons why we wouldn't be awesome BFFs. I think we really made a connection at the NBA All-Star Weekend and clearly we both have great taste in what NBA players inspire us the most.

In Ibaka's defense, Westbrook did give Serge the pump fake and we all know Serge can't help himself when it comes to going for the pump fake.

Also, Ibaka made up for it with this great picture with Kevin Durant and a MASSIVE stuffed bear. 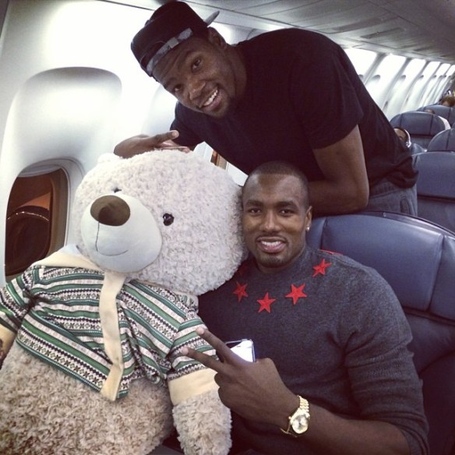 So...based on this picture, it is safe to assume that KD won the giant teddy bear for Ibaka because Durant is awesome and does super nice things for everyone.

I decided to attach a number to Hasheem Thabeet's selfie game. This one is decent but not the best we have seen from him in the past. He seems like such an interesting guy that I am stunned there isn't a tumblr where a guy follows/hangs out with Thabeet everyday and blogs about his day to day life.

What happened to our former children's jeans model this past week? The player who was at the center of the trade that sent James Harden to Houston has been struggling recently. And by struggling, I mean he has been really bad. Here are some of the numbers in his last four games. Minutes - 2, 26, 5, 20. Points - 0, 10, 0, 2. FGA - 0, 10, 1, 8 with a FG% of 26 during those four games. Lamb's struggles reached the tipping point this week when he earned his first DNP - Coach's Decision of the season. I really loved the way Scott Brooks was using his young second players Lamb and Perry Jones III and am not totally shocked that he has given those minutes to the veterans as the season winds down. That being said I do feel it is important for Brooks to find some way to get Lamb's confidence back before the playoffs start.

Double the Chris's...double your pleasure and double the fun.

I hope the Heat medical staff checked Chris Bosh and Chris Andersen at half time to make sure their respective menisci were still intact.

If there was one thing that True Detective and Rustin Cohle taught us is how to properly deliver a head butt, and that everything we have ever done or will do, we're going to do it over and over and over again. That is what I feel like this time of year is for the good teams in the NBA, and the Thunder are no exception. We have seen this movie before and we know what the outcome is going to be. The Thunder have done this before and will continue to do it over and over and over again. For me ranking how the Thunder are playing overall is pointless because the outcome in the playoffs matters more than losing games to a desperate Mavericks team.