The Thunder's once-deep bench, and how they've fallen off a cliff

Early in the season, we thought the Thunder would be seriously aided in their title hunt by their depth. The way things look right now, that might not happen.

Share All sharing options for: The Thunder's once-deep bench, and how they've fallen off a cliff

For much of the season, the line of thought regarding the Oklahoma City Thunder was that they were an extremely deep team. Sure, they were dependent on a lot of young players and veterans, with very little of the supporting cast in their primes. Discounting the 25-year-old stars of the team, Kevin Durant and Russell Westbrook, the only players in the 25--to-30-year-old age range that saw regular use were Thabo Sefolosha and Kendrick Perkins. The rest of the team is made of veterans drinking from the fountain of youth (Derek Fisher, Caron Butler, Nick Collison) and surprisingly good young guys (Reggie Jackson, Steven Adams, Jeremy Lamb, Perry Jones III).

Well, Sefolosha and Perkins' injuries have coincided with a sudden drop-off in play for the supporting cast. A number of individual players have fallen into slumps, and whether it's due to injuries forcing the rest of the team into uncomfortable roles and/or lineups or just a regression for players that were performing really well earlier on, the Thunder's bench suddenly looks a lot weaker than it did in December and January.

The loudest criticism of Scott Brooks is his tendency to overplay veterans. In March, the Thunder are playing Caron Butler for 28.4 minutes per game and Derek Fisher for 21.7. Those numbers are fourth and sixth on the Thunder, with Westbrook, whom slots in at 5th, sitting out one game in every back-to-back set as well. One or two of them appear in three of the Thunder's five most played four-man units from this month, and they actually happen to be the Thunder's eighth-most used two-man combination as well. The idea of it alone is pretty ugly, and now that Fisher is no longer an inferno from deep, it's playing out pretty poorly too.

Can the Thunder's new class graduate in time? 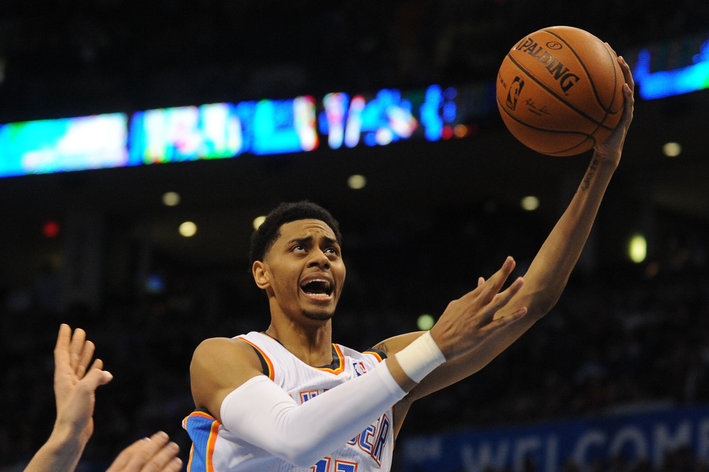 How have the Thunder youngsters Jackson, Lamb and Jones worked together to keep their spirits up as young players in the Thunder organization?

Fish's 39.1% three-point shooting in March is still pretty good, but it doesn't leave quite the same impact as when his percentage was in the mid-40s in January and February. Considering what else Fisher has in his game (not much), that five percent drop can make a big difference towards the justification of giving him major playing time. More importantly, Brooks has also thrown a fresh-off-the-waiver-wire Caron Butler into a big-minute role which features a lot of isolation opportunities (highlighted by Zach Lowe here), and he's shooting 36.4% from the field and 35.5% from three. Suddenly, the Thunder have two veterans soaking up a lot of playing time with disproportionate positive output.

That said, Brooks isn't exactly working with a lot in this situation. Many of the young players that looked so good earlier in the season have vanished on him. Jeremy Lamb and Perry Jones III have been regular DNPs recently, and as much as I'd like to say they have earned playing time through their body of the work earlier in the season, they might've played themselves out of the rotation recently.

Since the calendar flipped to 2014, Lamb has put up unsightly percentages of 38.3% from the field and 29.8% from three. That's picking an arbitrary date, but as the Thunder have gone further and further into the season, Lamb has unraveled more and more as a shooter. His consistency from earlier in the season has disappeared, and Caron Butler has supplanted him in the rotation. PJ3, the initial fill-in starter after Sefolosha's injury, has been similarly replaced by Andre Roberson. After committing visible mental mistakes defending off the ball and shooting just 37.5% from the field in his starts after Sefolosha went down, Brooks grew tired of PJ3 and gave a different prospect a look.

With that said, Roberson hasn't distinguished himself much either. As Zorgon said in a recent game recap, he has the worst offensive game in the NBA. It's probably sarcasm to a point (Reggie Evans is still a thing, right?) and Roberson was a work in progress from the start, but... it's not that far from the truth, either. He's shooting 38.5% from the field on 2.6 attempts per game, mostly limited to opportunities off of cuts or transition. Defensively, he's been good as advertised but still prone to mistakes off the ball as he adjusts to the speed of NBA players and offenses.

I could sing the praises of Reggie Jackson, Steven Adams and Nick Collison (in fact, the last two probably deserve some more playing time), but the bottom line here is that a once-deep Thunder team looks awfully shallow right now. The Perkins, Sefolosha and Westbrook injuries are impacting this to a degree by straining the team's depth, but even getting those guys back to full health doesn't seem like a sure answer here (and it may not happen by the time the playoffs come around, if at all this season).

With two and sometimes three key cogs of the rotation in suits come game time, the all-bench lineups from earlier in the season aren't a featured option of Brooks' right now. However, even when he starts to pull out his core players for members of the supporting cast, the effect it has on the Thunder is clear as that supporting cast often fails to command defensive attention away from the stars or create open shots.

Here, you have the Thunder running a Durant-Collison pick-and-roll out of the inbound. It's a good combination between Collison's screening and post-screening skills as well as Durant's Duranting ability, but surround them with Fisher, Butler and Roberson and things go south quickly.

When Durant turns the corner and attacks the paint, the entire defense reacts by collapsing in on him. Three defenders all come in on him to take away space. To guard three Thunder players spotting up on the perimeter, the Cavs employ only two players; Anderson Varejao is drawn away from defending Butler to protect against the rolling Collison, a ripple effect of using Collison's man on Durant. 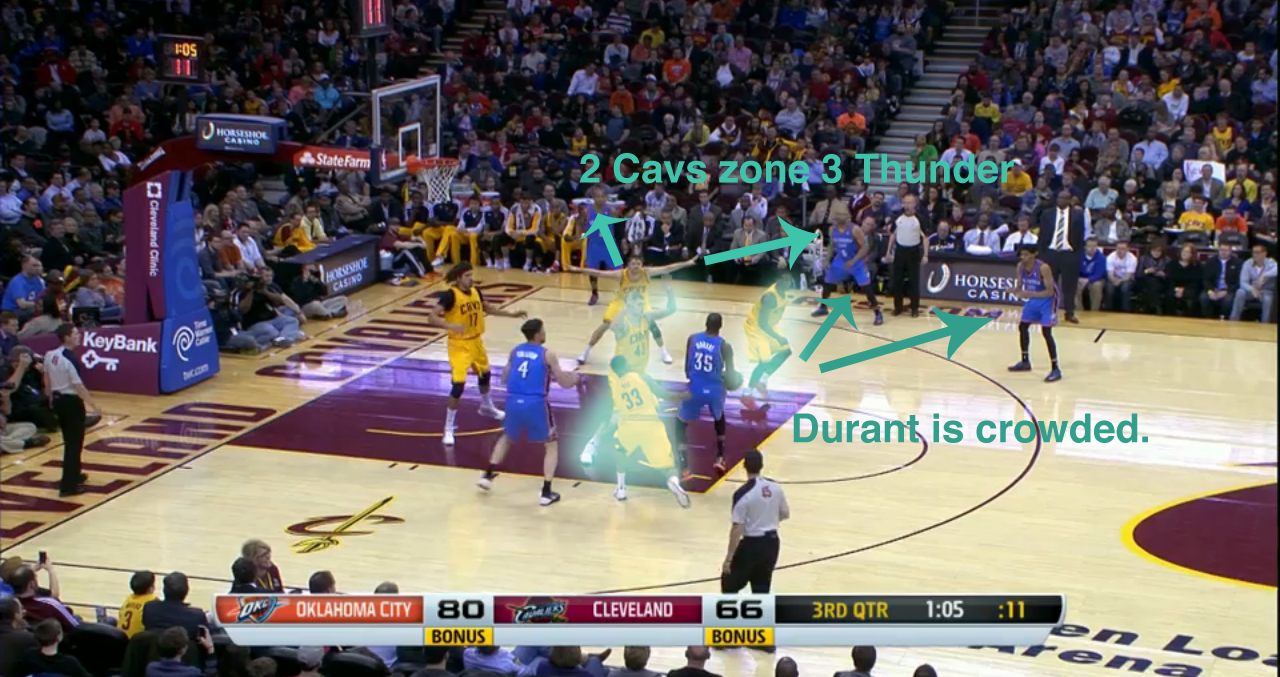 What happens in the end is that the Cavs, by taking away all immediate threats (and especially the one wearing #35), force a pass leading to a pass for an open shot. In the time those two passes are made, Varejao has enough time to close out on Butler's shot and challenge it nicely.

The key here is that the Cavs choose to defend Fisher, Butler and Roberson with only two players. Fisher and Butler are spot-up threats in this situation and the defense doesn't respect their shooting or off-the-bounce ability enough to closely commit a defender to them off the ball, knowing they can zone and recover (which is exactly what they do). Roberson isn't an offensive threat at all – replace him as the closest spot-up player to Durant with a shooter, and Durant would immediately get some more space. Unfortunately, Brooks doesn't really have any more catch-and-shoot role players beyond Fisher and Butler right now, not the way Lamb has been shooting the ball.

Take a talent like Durant out of the equation (whether it's actually taking him off the court, or simply running the offense through and for the role players), and things get even worse. The team can get some motion going, but it usually amounts to nothing more than probing the defense with repeated drives or forced cutting that doesn't create a good shot.

Watch this play, as the Thunder try a number of actions that don't build up to anything good. A dribble pitch to Lamb? Nothing. A Lamb drive out of a pick-and-roll? Nothing. A Fisher pump fake-and-go? Nothing. A kick to Lamb? Nothing. With little time left on the shot clock at this point, the only option left is a Lamb isolation. Nothing.

They're literally ramming their head into a wall over and over for 24 seconds.

Brute force isn't going to work when you lack brute force, and basic offensive actions like these don't work unless you have advanced offensive threats like Durant and Westbrook. We've known Scott Brooks to be an unimaginative offensive coach for a long time, relying on basic actions and sets with offensive maestros to get the job done. His best work is featured defensively and in the development of prospects.

Right now, as the Thunder's rotations are being tested by the loss of two starters as well as the occasional missing star, the bench that looked so deep and reliable earlier in the season looks anything but. Whether it's a slump or a regression, they're simply not good enough right now to get the job done. The Thunder are 8-4 in the month of March, which is still a very good record. However, they're relying almost entirely on Kevin Durant, Russell Westbrook, Serge Ibaka and Reggie Jackson to get the job done right now. The rest of the team is "just there" more than they are actively helping.

A positive anecdote: I think Butler can be significantly better than he has been so far, but that one comes down to Brooks. Stop calling so many isolations for the man, and let him find his stroke as a spot-up guy! Butler's a streaky shooter with questionable shot selection. Take shot selection out of his hands and he's much more likely to get on a hot streak. One more positive anecdote: I lumped him in with struggling players because he's Derek Fisher, but Fish really hasn't been so bad. In an ideal world, he's not playing 20 minutes per game, but the Thunder's stars are good enough to justify using him in that role anyway... as long as the three-point shooting doesn't drop too much more.

Can KD, Russ, Ibaka and Jackson carry a team through the playoffs alone? Honestly, maybe they can. The West is stacked, but those four are really talented. The (hopeful?) return of Perkins and Sefolosha should help the supporting cast, as will Brooks shortening his rotation when the playoffs roll around. But if this keeps up, make no mistake. It will be the core of this team carrying it, not the bench we once thought was loaded with players that could help in the title chase.