Kevin Durant's 51 points, 12 rebounds and 7 assists were enough for the Thunder to prevail over the Raptors in 2OT despite Russell Westbrook re-injuring his right knee.

The moment Russell Westbrook limped off the floor to the locker room, after slamming his hand down in frustration, Friday night's game against the Toronto Raptors suddenly meant a lot less in the grand scheme of things. In that instant, it became a matter of just getting the heck out of Toronto and hoping for the best possible news regarding his knee in the morning.

Through it all - the injury, the overtimes, the questionable rotation decisions, the terrible execution in key moments - there it was: second overtime, Kevin Durant, improbably, with the ball in his hands and his team down two points with a chance to tie or take the lead.

A three-pointer in the face of all of Toronto with a second left on the clock. One-point OKC lead. A Raptors miss and the Oklahoma City Thunder somehow, some way, were on the plane back to across the border with a 119-118 victory to cap off a wild Friday night in Canada.

How on earth did they get there?

The game was sloppy to start. The Thunder and Raptors both struggled to hit shots, including Durant, who had just 13 points on 12 shots at halftime.

Then, about four minutes into the second half, Westbrook drew Kyle Lowry up on a pump fake. Lowry bit on it and, completely by accident, came down onto Westbrook's knee. Everything about the contact itself - the way the knee bent, the way Westbrook frustratingly slammed his hand down - evoked memories of the initial incident against the Rockets last postseason.

That look of frustration, coupled with Westbrook's limp to the locker room, was enough to shake up any Thunder fan watching from home, so you can only imagine what his teammates must have been feeling.

Still, the group kept it together and Reggie Jackson, in Westbrook's place, began to go a tear along with Durant. Both guys began helping out on the glass and running the offense, taking turns and playing off one another.

Kevin Durant added to his legend vs the Raptors.

As the teams went back and forth, Durant hit what looked like a dagger three with a minute left in regulation. But the Raptors tied it with 17 seconds left, giving the Thunder one last crack at it. An embarrassingly convoluted play resulted in the Thunder not even getting a shot off, and it was time for overtime.

The first overtime looked promising for OKC, as well, as they seemed to control the entire period, until a late Lowry 3-pointer tied it. The Thunder were once again unable to draw up anything too inventive for the final play, and a Jeremy Lamb prayer went unanswered, leading to the second OT.

It was the Raptors that controlled the entire second overtime frame, and with the Thunder trailing 118-110 with 49 seconds left, it seemed like the only thing left to do was turn off the TV and pray all night that tomorrow's evaluation would bring positive results.

That's when Durant decided to answer a few prayers on his own, first. He nailed a three to begin with, and then a defensive stop led to a Derek Fisher three (because of course he hits a clutch three) to cut the lead to 118-116. After a wild sequence in which KD lost a chance to tie it off a steal, John Salmons missed both free throws and left the door open for the Thunder to at least force a third OT after all.

Durant went for it all, though, and it paid off.

Just a wild, wild game, with almost too much to write about. Suffice it to say, it's three straight on the road for the Thunder, two of which were tough tests against very quality Eastern Conference teams in Chicago and Toronto.

Now, it's another type of test that could affect the way the rest of the season plays out for the Thunder.

(For what it's worth, Darnell Mayberry of The Oklahoman reported that "Westbrook was in great spirits after the game" and doesn't expect to miss any time. Cross your fingers. And your toes.)

I, along with every other Thunder fan - and, really, any basketball fan - truly, sincerely, with all of my heart, hope it ends up as just a sprain for Westbrook. He's such a special player, and so much fun to watch, that it would be a shame not just for the Thunder, but for the game of basketball, to have him out for more time because of these recurring knee injuries. 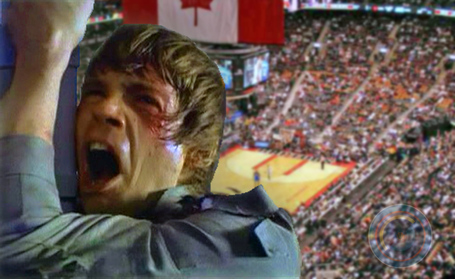 All of that said... Man, is it nice to have Kevin Durant on the team as well, or what? The MVP race has been over since January as far as I'm concerned, but if he didn't put a stamp on it with tonight's performance, then I have no idea how the voting works.

Seriously, it's to the point that it takes a 51-point outing for us to raise our eyebrows anymore. Nevermind the fact that he scores 30 basically night in and night out. The 25+ point streak, which extended to 34 tonight, is a great streak to talk about, but even that sort of simplifies the fact that Durant is scoring like crazy every single night, no matter who is guarding him or what is going on around him. The consistency is unmatched.

It's also his third straight game of 30+ points/10+ rebounds/5+ assists. The 51/12/7 makes him just the second player to reach those numbers in the past 20 years, next to Michael Jordan, who did it twice.

Losing Westbrook would make a trip to the Finals far, far more difficult, but if anyone could lead their team in the West, Durant has shown that it's him. And the MVP trophy that comes with it would at least be a decent consolation prize.

Last game I said I felt like I was breaking the rules by answering Kevin Durant to this question every time. But, I mean, what else do you say, especially after THAT?

You could also go with the mental toughness of the entire team. Again, I couldn't even really breathe right, focus, or find any real will to do anything for about 15 minutes after Westbrook limped out. So I can only assume how difficult it must have been for the team to go out and play basketball, particularly against a good team like the Raptors.

Somehow, they did it. They maintained focus, kept the game within reach, and made plays when they needed them most. Mental toughness goes a long way in playoff series when games get close and things get tense, so it was nice to see the Thunder rally together and take care of business in spite of the traumatic event that took place right in front of them.

It was so evenly matched that neither team had a significant edge in any particular category. Both shot poorly as a whole, both had lapses on the glass, allowing offensive boards, and both were careless with the ball from time to time.

So let's just write KD's line again because it's so beautiful.

This team really has gone through a lot. They've had to adjust on the fly to injuries more than they ever have in the past. No matter how uncertain the lineup has been, they continue to plug away and find ways to win. That can certainly be tied to Durant, whose leadership skills are undeniable at this point, but it goes deeper than that.

No matter how much we may want to harp on Scott Brooks for playing guys too much (ahem, Fisher, ahem, Butler) or drawing up weird plays at the end of games, he deserves a ton of credit for keeping the guys together and focused throughout all of it. No one would have blamed the Thunder for folding tonight, the second night of a road back-to-back, after their star player, who had worked so hard, twice, to come back from a knee injury, went limping off the court.

They didn't. Maybe it's coaching. Maybe it's having good leaders. It's probably a combination of both, along with the overall culture of the organization.

Whatever it is, this Thunder team is going to find ways to win. Even if the other results aren't so positive later today.

But seriously, please be good news.