Kevin Durant extended his streak of games with 25+ points to 30, while Russell Westbrook was simply dominant in the Thunder's 131-102 win on Thursday.

Four days after its most embarrassing loss of the season, the Oklahoma City Thunder got a small measure of revenge against the Los Angeles Lakers, blowing them out 131-102.

It played out the way Sunday's game was supposed to, with the Thunder coming out hot, playing defense (still not great, but better), and withstanding Lakers runs before ultimately pulling away. It was the way they did it, though, that was just so... Thunder-y.

When the Thunder is at its best is when Westbrook comes out attacking, and he did just that tonight. From the opening defensive possession, when an Andre Roberson strip led to an easy dunk on the other end for Westbrook, he had everything working. The famous midrange pullup jumpers, the relentless defensive energy and, most importantly, those drives to the rim. He even got the 3-point game going in the second half (more on that in a second). It seems like it's always talked about when Westbrook plays well, but you can just see how much these things help everyone else settle into the game.

Westbrook scored nine of the Thunder's first 13 points, scored or assisted on seven of their first eight field goals, and finished his first quarter shift with 11 points and 3 assists.

Then, as OKC has done so many times following a hot Westbrook start, the rest of the offensive starting finding their rhythm as well. Especially KD, who quietly had nine points in the first quarter himself. It's simple: with Westbrook cooking, Durant has that much more room to make things happen on his own.

Durant's defense hurt him, though. He picked up three fouls in the first half and a fourth just 2 minutes into the second half. That sent him to the bench way earlier than expected. Westbrook had things under control from there.

In the second quarter, Westbrook checked back in for his second shift and sparked a 13-1 Thunder run. In the third quarter, it was a personal 12-2 run by Westbrook, in which he hit three 3-pointers, and was fouled on another (resulting in three free throws - which he made). Those two runs really put the game out of reach and meant the only real drama left was whether or not KD could extend his streak of scoring 25+ points to 30 games. He did.

It was talked about a lot coming in after Durant matched his personal-best 29 game streak of scoring 25+ against Houston. That meant that he could become the first player since Jordan to do it in 30 straight. Except the foul trouble, along with the fact that the Thunder were blowing them out (and the starters typically rest in blowouts) - meant that he may not get there after all.

But Brooks gave him a chance, even letting Durant play seven minutes into the fourth, and Durant got there.

Happy endings all around.

You mean besides "Poor Jeremy Lamb"?

Scott Brooks is still growing as a coach. It started before the game, when he adjusted the starting lineup to put Roberson in place of Perry Jones. Yes, you read that right, Scott Brooks adjusted the starting lineup. It was an easy choice to make. Roberson provided a spark in the win over the Lakers right before the All-Star break, and Jones simply was unable to keep up with Jodie Meeks on Sunday. So Brooks, as so many have clamored he do on so many other occasions, played to the matchup and used the more physical Roberson. It worked. Even though Meeks still had a team-high 19 points, it came on 6-of-15 shooting and he it didn't look nearly as easy as it did on Sunday.

Then, and I can't say for sure how much of this was Brooks, and how much of it was KD and/or the rest of the team, but he let KD go after the streak. They can downplay it and say it was just part of the game, that KD was fresh from sitting with four fouls and needed to get minutes, but they were all well aware of what he was going for. You could see it in the players' faces when Durant went to the line for the free throws that gave him points 24 and 25. Everyone knew.

You know what? That's perfectly fine. Durant was fresh, and anytime you're talking about matching Michael Jordan, that's not a streak you just give up without a fight. Does it make the Thunder poor sports? Does it clash with their culture? I know a lot of Thunder fans (mostly me) gave Lebron a hard time for going for 61 against Charlotte in a 20-point blowout, but there are some things that are bigger than one game. 82 games is a lot. There are so many ups and downs, sometimes it's nice to have something like a 61-point game or a streak of 30 games with 25+ points to keep you interested for the entire duration.

Good on you, Scott. Don't be afraid to adjust in the playoffs, either.

Well it was mostly Russell Westbrook, but I've gotten far too deep into this recap without mentioning Serge Ibaka, who was an absolute monster and continues to prove his value.

Ibaka finished with 15 points, 13 rebounds and seven blocks. That doesn't even capture just how disruptive he was though. It seemed like he was there for every shot, making it impossible for the Lakers to get easy shots at the rim. He also continues to dominate the glass, following up Sunday's 15 board outing, and Tuesday's 16 board outing against Dwight Howard, with 13 more tonight. All of this came just one night after this: 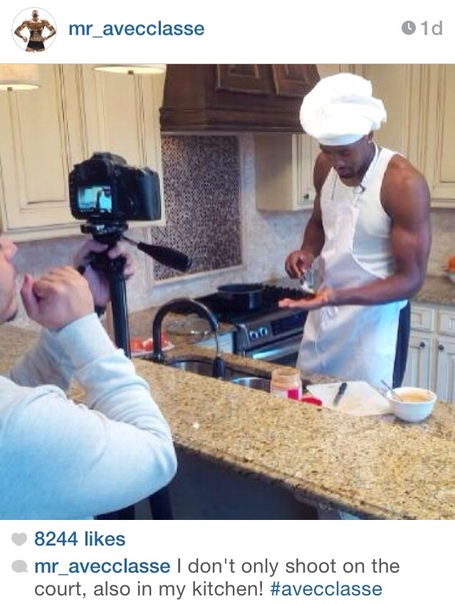 Ibaka's last three games: 16.0 points/14.7 rebounds/4.3 blocks. The Thunder's defense has been pretty terrible since the All-Star break, but it's largely due to poor closeouts and perimeter defense, not easy buckets at the rim. Ibaka is controlling the paint as well as ever. Now it's up to the rest of the guys to not overcommit and closeout when the offense kicks it out to avoid Ibaka at the rim.

23 minutes for Russell Westbrook. That's about the actual running time of an episode of "Parks and Recreation." It's not that long at all, really. In those 23 minutes, Westbrook dropped 29 points, dished 9 assists, stole it 3 times, and even came up with a nasty block.

First it was his 21 minute triple-double, and now this 23-minute masterpiece. Westbrook is obviously too great to keep limited when healthy, but dang is he making the most of his time on the floor when he's in there.

LA actually shot 48.1 percent from three tonight, up from 41.9 on Sunday, but 39.4 was a far cry from Sunday's 46.9, making it too hard for the Lakers to keep up the Thunder. The 3-point defense continues to be a problem, but this was definitely a step in the right direction, correcting some of the defensive woes.

The Thunder has at least gotten back to playing winning basketball. As mentioned, the defense still is a work in progress without Thabo Sefolosha or Kendrick Perkins, but winning solves a lot of issues. Now it's a matter of maintaining as the Thunder have a relative soft schedule for the next week.

Thunder Blunder: Jeremy Lamb. Not because of anything he did. Just because he's officially a garbage time guy again, and that's a bummer.