Steven Adams Watch: another lackluster week in the NBA life of the Kiwi

Steven Adams saw minimal minutes in three games this week. He brought little production and had more negatives than positives.

Share All sharing options for: Steven Adams Watch: another lackluster week in the NBA life of the Kiwi

Last week, we saw what Steven Adams can do. He produced points from the free throw line and defended the paint well. This week, while seeing a cut back on minutes, Adams failed to enrich the Thunder's offense and defense. In 15 minutes of play, the most Adams played in any game all week, he attempted 4 foul shots, and missed all.

Throughout this week, Hasheem Thabeet received a much improved number of minutes and Serge Ibaka filled in at center for some time, leaving little space for the Kiwi to make a mark. Though, when he played a handful of minutes against the Philadephia 76ers, Henry Sims and Byron Mullens both had one of the best games of their seasons. Now that he is halfway through filling in for Perkins, Adams has not proved his worthiness yet. If anything, he has showed that the Thunder need Perkins. With small flashes of solidness, Adams has a ways to go in his 3rd week as the starter.

This game's result was known even before the tip-off. The Thunder swept the floor with Philadelphia, but, in the battle of the big men, the 76ers were victorious. Henry Sims, the substitute for Nerlens Noel, has amounted to barely anything this season. Though, against Adams, he looked like a rising star. Scoring 10 points, compared to his season average of 3.5, Sims dominated the paint and got sent to the foul line a number of times. Off the bench, Byron Mullens experienced one of the best game he has had in the 2013-14 season, scoring 15 points. Offensively, Adams shot 100 percent...but off of one shot. Drawing fouls was certainly not a problem, as he found his way to the foul line twice...but he failed to convert any attempts into points. On top of Adams' one basket off of one shot, he rebounded just 3 times, turned the ball over once, and fouled twice. Committing 2 personal fouls in a little over a quarter of play time is not a positive in your game. The bad news for the Kiwi was Hasheem Thabeet's solid play offensively and defensively. 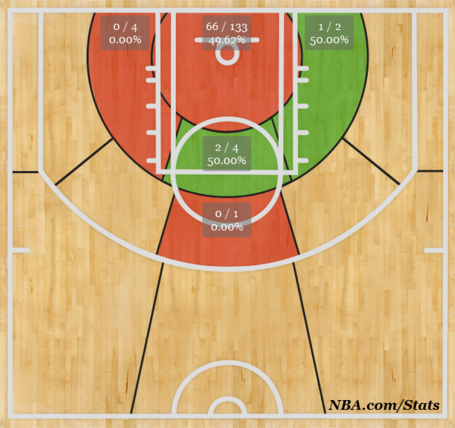 There really is not much to say about this match-up. Except that on the box score, his personal fouls (two) was his largest stat of the night. That night, Adams played 11 minutes and was on pace to foul out. He surely contributed to the lackadaisical defense that let up 128 points. Other than that, he did not contribute positively in this game versus the Phoenix Suns.

In this disappointing nightmare of a game, Adams played the least amount of minutes for the week. In his 10 minutes on the court, Adams, again, did not fill the stat sheet, but he played up from last game versus the Suns. While Serge Ibaka got most of the minutes at center, Adams rebounded twice and stripped the ball once. He played decent help defense in the paint but did not attempt a field goal. Overall, Adams did not receive the sufficient amount of minutes to actually contribute in a big way, but he did play "okay" versus the Lakers.

This week, we saw Steven Adams receive the lowest minutes of his time as a starter. Overall, he attempted one shot in three games and committed 5 personal fouls. In this upcoming week, Adams will be challenged with helping out on D for the most powerful center of the league, Dwight Howard. I assume Serge Ibaka will be assigned to Howard, but it will be Adams job to help out and rebound. After the Rockets, the Lakers will return, then the Mavericks on Sunday. I would like to see more attempted field goals in these upcoming games. In his first two weeks, he explored his offensive side but this week, he refrained from shooting. Along with scoring, more aggressiveness on defense is needed. The Thunder D is the worst it has been in a while and Adams can be a factor in rebuilding the elite defense. Hopefully, Brooks will give Adams a chance, but Adams must produce in order to stay in the game.

For now, enjoy this clip of the Kiwi making a trick shot.