Find out what the 4-1-1 is on the Knicks, and check out what NBA JAM has to say about tonight's game.

The Last Time Carmelo Anthony Played Kevin Durant: April 7th, 2013. That was extremely long ago. So long ago, in fact, that it might as well have been the 90s. Let's take that a step further. Why don't we just pretend that this game is taking place on a sunny afternoon in 1993? Here's how a forum post of mine might have gone, had all of us lived back then....

Man, I'm glad that the Thunder are on TV again. I can't believe that KSBI refused to broadcast Friday's loss to Orlando. The highlights on the local news didn't show much of what happened, other than that absurd last second dunk by Tobias Harris. I've hardly even heard of most of the players on Orlando's roster, and they tore us up. But the box score in the paper said that Ibaka had 26 points and 5 blocks. If that's not a typographical error, he might actually be on his way to finally creating his own shots. Anyway, today's game will be on the network of the versed drama artists, NBC.

I've been able to catch most of the episodes of Inside Stuff this season (my VCR makes it so that I don't have to wake up on Saturday morning), and they haven't done a single feature on the New York Knicks since the season began. The Knicks are one of the NBA's most popular teams, but there's way too much turmoil going on in that locker room. Mike Woodson is under constant threat of being fired, Metta World Peace is potentially making trade overtures, and key injuries always seem to bring them down.

The last time we played the Knicks, the last part of that sentence was especially true. It was a rare game where Carmelo Anthony sat out. Oddly enough, it was also Russell Westbrook's last game with the Thunder before he had a third surgery to repair the meniscus in his knee. These two factors coalesced into a complete Knick collapse, and the game wasn't competitive at all in the second half.

This time around, the match should be a lot more slammin'. The Thunder are 2-2 over their last four, and haven't exactly faced the greatest of competition. The problem doesn't necessarily start and end with Westbrook, but without him the Thunder aren't an elite level team. They might excel on particular nights or against particular competition, but they have too many flaws to be exploited. The Knicks have the ability to go postal on those flaws, namely with wicked offensive ball movement. New York may have gotten crushed by 29 points the last time we saw them, but they still shot 42% from the field and managed 23 assists to 12 turnovers. The Thunder simply love to load the strong side, and will continue to do so against JR and Melo tonight.

But really, it's hard to know what to expect from the New York Knicks. When Bargnani went out with injury on January 22nd, the Knicks were one of the league's lowest scoring teams. Then Mike Woodson went small, and the Knicks rattled off four straight victories. They averaged 116.5 PPG during that stretch. In the four games since then, they're 1-3. During that stretch, they were straight trippin' against the Bucks and failed to break 91 against the high-scoring Heat and Blazers. Their latest 117-90 win over Denver would seem to indicate that they have returned to their winning ways, but Knicks fans know better. In Seth Rosenthal's article on the Posting and Toasting BBS, he describes their situation perfectly:

"Knicks games feel like random events at this point. Days after floundering against a shorthanded version of the worst team in the NBA, the gave the extremely good Blazers a real game. Why? Did they try harder? Did Mike Woodson coach the team better? Did guys perform better? Did the Blazers struggle? Is it just the cycle of the moon, the changing of the tides? Is any of this even real?"

I'm not really sure myself, as I sit here in the library. The only reason I'm spending so long typing this forum post is because my friend told me he'd meet me here 15 minutes ago. I would call him on the payphone, but I don't have a quarter, and my hour of computer time is almost up. Anyway.... 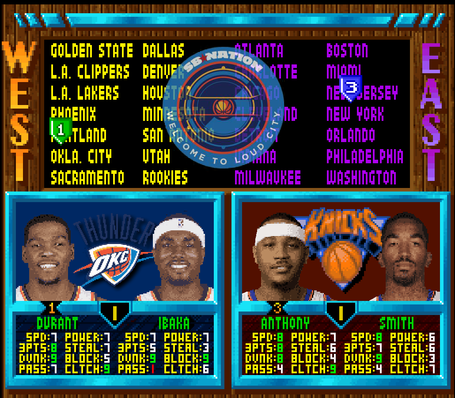 NBA JAM Analysis: Normally I break out my copy of NBA Showdown for this section, but today I thought we'd have some fun with the infinitely more popular NBA JAM. Why? Well, the talent of Carmelo Anthony and Kevin Durant basically makes the real life version of this game just as dope as the NBA JAM version of this game. Furthermore, Westbrook's refusal to be included in the game (due to the lucrative contract he signed with an international fashion company) makes the Thunder's roster actually accurate.

Who won? The Knicks did.

Psyche, I did! As always. As the Thunder. The game mostly consisted of me going for really long dunks with Ibaka while Durant's insane clutch rating kept the Thunder from being absolute garbage on defense. The match came down to the last few seconds, and Melo had a chance to win. But the buzzer went off while the ball was still in his hand, freezing time until the next occasion I turn on my SNES.

For full disclosure, I was born in 1991. I must have been a terrible two year old.

What do you think about tonight's game? Let us know in the comments!