Kendrick Perkins didn't do all that terribly against the young, talented Nikola Vucevic, but his team came up short.

The Oklahoma City Thunder lost a close game to the Orlando Magic, 103-102, on Friday night after Kevin Durant missed a shot, then sort of just stood there along with the rest of the team while the Magic ran down and dunked it in at the buzzer for the win. That happened. It shouldn't have, but it did.

Something else that definitely shouldn't have happened, but did, was the selection of Kendrick Perkins vs. Nikola Vucevic as the night's key matchup. It probably should have been Durant vs. Arron Afflalo, or Reggie Jackson vs. Victor Oladipo, but Perkins has always sort of struggled with centers that can shoot, so that was the rationale.

Just as the Thunder probably feel about much of their 2nd half performance, it's too late to take it back.

Recap: Magic pulls off a shocker with buzzer-beating slam 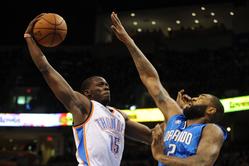 The Thunder were up big early but fell apart late and lost to the Magic in a highly dramatic fashion.

To call Kendrick Perkins a liability on the offensive end would be the polite way of saying it. His offensive rating is 86. That's not even the most horrifying stat though. He has a league-worst...a league worst... -2.1 estimated wins added. His PER is slightly better, only 10th-worst in the league.

Except Perkins' thing has always been, "Check the wins and losses since I've been here." While there's like 800 other things that go into that win/loss record "since [he's] been here," the sentiment with that is hard to argue with. The fact is this team has been a championship contender since he's arrived.

So his matchup on the other end, Vucevic, can boast statistical advantages in all of the major categories. In fact, his 15 points and 12 rebounds a game on 50 percent shooting is actually quite impressive.

Along long with the win/loss record, Perkins's calling card - no matter how misguided it may be at times - has always been his defense. In his mind, and more importantly, in the coaching staff's mind, what he brings on the defensive end allows him to be a non-factor on offense. Again, is it misguided? Sometimes (see: every game against Miami). But has the Thunder won a lot of games with him regardless? Undeniably.

And as far as defense goes, particularly as far as those SportVU tracking stats go, Perkins actually holds his own with the younger, more athletic, better-shooting, just-all-around-way-better-than-him, Vucevic. The contested rebound percentage only slightly favors Vucevic at 32.9 to 32.0, meaning Perkins while not a prolific rebounder, could make the case that he can battle with Vucevic any day.

The more telling stat, though, no matter how shocking it may be, is the fact that opponents are shooting just 39.4 percent at the rim against Perkins. That's sixth-best in the league among players that see more than three attempts at the rim per game. Vucevic, on the other hand, is allowing 50.6 percent at the rim. It's on four more attempts per game than Perkins, which is significant. Still, Perkins' defensive presence - while possibly slightly overrated by that stat - is still palpable.

The thing working in Vucevic's favor is that he's a center that likes to shoot, with 50 percent of his field goal attempts coming as jump shots. Obviously, Perkins' interior defense is less of a factor against centers that don't need to hang out inside.

In all honesty, Perkins was never going to win this matchup. He was just going to use his time on the floor to limit Vucevic. And while 10 and 10 is a double-double, Vucevic had very little to do with the Magic winning this game.

Perkins, knowing Vucevic proclivity for jump shots, basically dared Vucevic to beat him with the jumpshot. Three of his four first quarter shots against Perkins were jumpshots, and Vucevic finished just 4-of-12 for the game, with six of those 12 as jumpshots.

Overall, Perkins did his job. And while it's hard to ever argue that Perkins is a good option to have on the floor in a close game, in the fourth quarter, when the Thunder seemingly couldn't get a stop, the question of whether his defensive presence would have helped is warranted.

Of course, that means he would have been in there on the offensive end, and when baskets were tough to come by in that second half, you can certainly see why coach Scott Brooks wouldn't want his stone-handed center in there.

Perkins may have done a decent job within his personal matchup, but he's the one that wants to be judged by his win/loss record.

1) Vucevic did make a nice play out-muscling Perkins here. It's not so much the offensive rebound as it is the fact that he finished after it. If Perkins gets that same offensive rebound, he almost certainly takes an extra second going up with it, then gets it stripped, then mean-mugs the refs the entire way back down the court.

Perkins did assist on a three later in the game after gathering his own offensive rebound, which does show his awareness of his limitations. But it certainly helps when a guy can take it and finish himself the easy way, rather than having to hope for a three to fall from a teammate.

2) There's not really any good video of it, but Perkins got another technical - surprisingly only his sixth of the year, even though it seems like he has 26 - after setting an obnoxiously illegal screen in the 3rd quarter. Look, Kendrick, it's no secret you set more than a few illegal screens. You have a reputation for getting away with them. So to get upset when you commit one that is so obvious the ref has to call it... just stop acting surprised. save the technicals for saying super scary things to the other team. Those are easier to live with.

3) When Perkins actually sets legal screens, he can be an effective screen-and-roll player. That is, when he actually catches the ball. This was one of those few times where Perkins set a nice screen, rolled to the open area, caught and finished. Plays like this are about as rare as Bigfoot sightings, but when they happen, they're just as horrifyingly fun to watch. Certainly makes to wonder how much scarier the Thunder offense could be with Perkins as an offensive weapon. Hard to want more from this Thunder team, though.

Play of the game:

- Obviously, the play of the game was that buzzer-beating dunk. But Perkins was on the bench and Vucevic was nowhere to be found. This play looked like it sealed it for the Thunder. Vucevic had a chance to put the Magic up late, but failed to convert, and as he got caught underneath the Thunder got out in transition and looked to hit a back-breaking three. It was a great play for the Thunder after Vucevic, the youngster, failed to come through on his end.

He got the last laugh though.

KD vs. Melo because duhhhh.