Head to Head: Thunder past vs present meets as Jeremy Lamb takes on Kevin Martin

Share All sharing options for: Head to Head: Thunder past vs present meets as Jeremy Lamb takes on Kevin Martin

The original key matchup was supposed to be Love vs. Kevin Durant, but that was before Love almost broke himself on Tuesday night against the Lakers.

Thankfully, for the purposes of this series, there was another juicy matchup between a former Thunder sniper, and the guy that has been called on this season to replace him.

Hey, did you know the Thunder used to have James Harden as their shooting guard? Jeremy Lamb and Kevin Martin sure do. It comes with the territory of playing the position in OKC these days - you have to deal with the constant Harden comparisons. 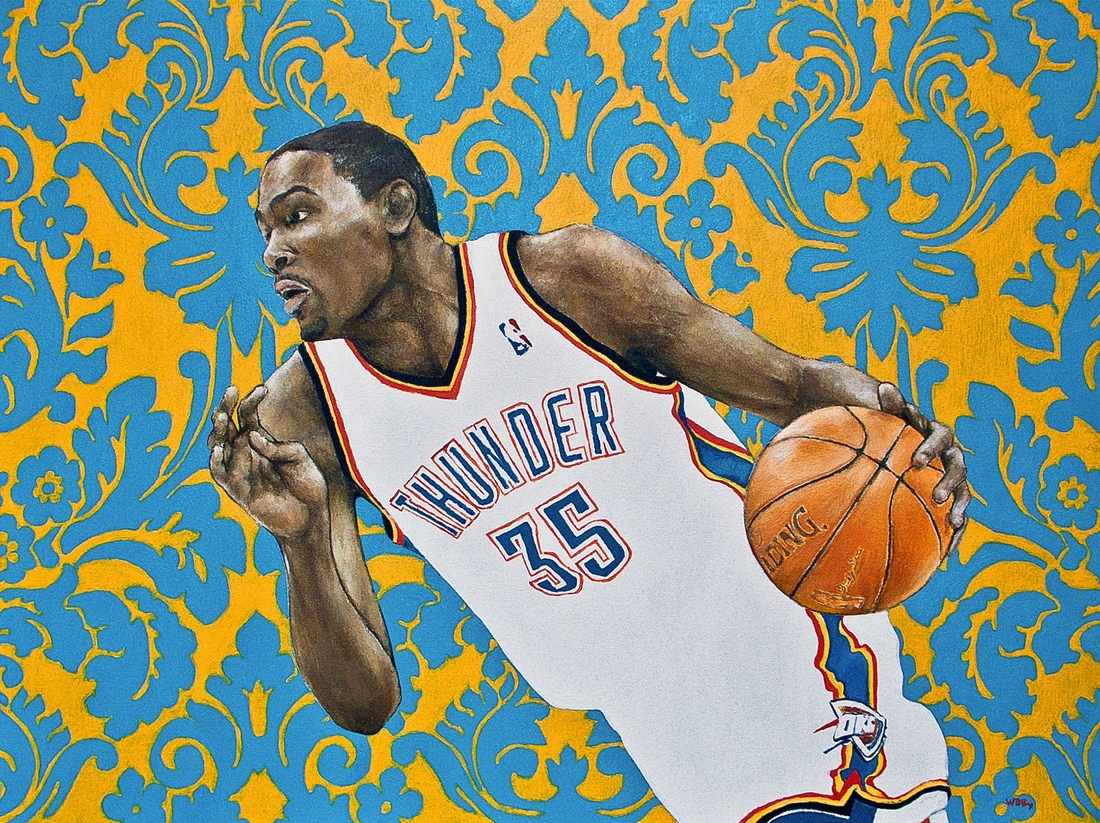 The Thunder used a 4th quarter surge to put away the shorthanded Timberwolves.

Lamb came into the year not only having to deal with the Harden comparisons, but Kevin Martin comparisons as well. If you take a quick look at how his season has stacked up against Martin's last year, he's actually filled in quite wonderfully.

Martin averaged 14 points per game in 2012-13 compared to Lamb's 10 this year, but Martin also averaged 27 minutes compared to Lamb's 22. The assists and rebounds actually favor Lamb when looking at the per 36 numbers, and to the naked eye, that's been Lamb's biggest boasting point over Martin.

It has been Lamb's ability to affect games not just with his shooting, but making things happen on his own, as well. At times when OKC has needed help on the glass, it has been Lamb stepping up and gathering the long rebounds while the other rebounders are occupied. That's something Martin never really did, at least for the Thunder. When he was feeling it, Martin could score with the best of them, but when Martin struggled with his shot, there wasn't any other consistent area that he would contribute. Lamb's ability to provide value elsewhere on the floor has been a welcome change for the team.

One other huge thing to keep in mind is that Lamb, for more than half of this season, hasn't had Russell Westbrook to set him up and alleviate some of the defensive pressure the way Martin had all of last year (until the playoffs, that is :-( ) so Lamb's scoring and, more importantly, his playmaking ability, has been all the more important.

That makes the net on/off rating even more intriguing. Lamb's 2.6 is only marginally better than '12-'13 Martin's 2.0, but the fact that Lamb has had Westbrook on the floor with him far less than Martin did further speaks to the job he has done.

Of course, all of that is based on Martin's performance last year. This year, Martin is obviously filling a much larger role for a team that needs his scoring more than the Thunder ever did. This skews thir 2014 numbers simply because they are playing vastly different roles.

Particularly on Wednesday, with injuries up and down the roster, Martin's scoring was needed more than ever. Lamb's role was business as usual.

Despite the inflated expectations for this game, Martin ended up having one of those "mehhh" games that frustrated Thunder fans so much last year. Whether that was the result of the Thunder defense or it was the fact that he had 32 the night before against the Lakers and may have been a little fatigued, the fact is Martin was a non factor. So much so that he didn't even play in the fourth quarter.

Lamb's game wasn't much better, but he had Kevin Durant. And he also didn't have Gorgui Dieng. Both of these things were important.

Here's all you really need to know about how much of a non-matchup this was: The two didn't even set foot on the floor at the same time.

Lamb didn't check in until the start of the 2nd quarter, when Martin took his first rest. He checked out after six minutes, before Martin ever checked back in. He then checked in with 3:06 left in the 3rd quarter, at the same time Martin checked out for the very last time. Just riveting stuff.

Neither guy had much of an impact on the outcome - which says more about Martin than it does Lamb, given their respective responsibilities - but here are the final lines regardless:

Not much of a difference, but as has been the case with Lamb's entire season in comparison to Martin's of last year, it was WHEN Lamb made those plays. Particularly in the fourth quarter while Martin was on the bench.

Not a pretty matchup, not too much to take away from it, but Lamb did his job when he was needed. Which not only makes him the winner of tonight's matchup but, far more importantly, might be all the evidence needed that he is a more than worthy replacement for Kevin Martin.

1) With 1:31 left in the 3rd quarter and the scored tied 74-74, Lamb gathered an offensive rebound after having his first attempt blocked.

2) Lamb's and-1 3 pointer to start off the 4th (foul was away from the ball so Fisher shot the FT): Martin is sort of being scrutinized like an ex-girlfriend at this point, but Lamb's shooting motion is so, so pretty. Especially compared to, you know, this. This one also came on the heels of that Fisher/Dieng three point... whatever that was, and helped the Thunder build up their lead to begin the 4th quarter. Big shot by Lamb.

Play of the game: With 7:20 left in the 3rd quarter, Lamb let J.J. Barea drive past him but stuck a hand in and poked the ball loose. He flared up the court as Reggie Jackson gathered the loose ball and fed Lamb for the fastbreak dunk, putting OKC up 93-81: Really, while the offensive rebound tells some of the story, this one says it all. The game was still somewhat in the balance, and there was Lamb to stick his hand in and create the opportunity. He hadn't shot well all night, he hadn't played much, period. But he kept his head in it and made a crafty defensive play. Then he got a nice payoff with the two-handed dagger dunk to finish it off.