When it came down to it, the Oklahoma City Thunder knew how to put away the Minnesota Timberwolves and send them packing with a loss.

The Oklahoma City Thunder defeated the Minnesota Timberwolves, 106-97. In a game that was far closer than it should have been, given that the Wolves were without Kevin Love, Nikola Pekovic, and Corey Brewer, their backups kept it close.

It was not until an early 4th quarter run by the Thunder that they finally got some breathing room and were able to put away Minnesota.

The Timberwolves may have led by six points at one point, but the OKlahoma City Thunder sure know how to win games.

Head to Head: who won the matchup between Lamb and Martin? 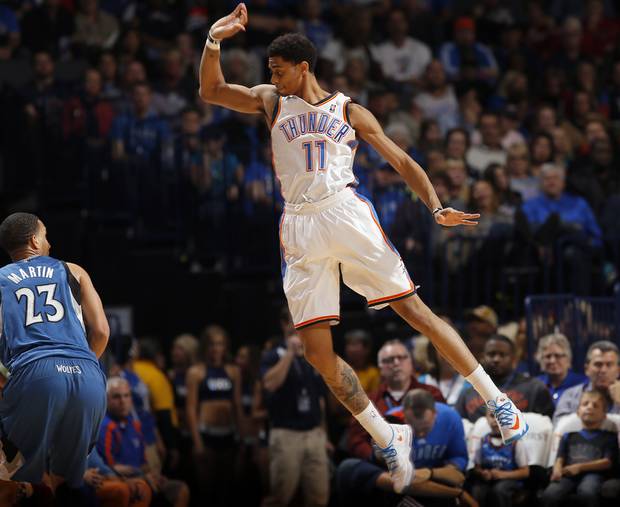 Present meets past as Jeremy Lamb took on former Thunder player (and the guy he replaced) Kevin Martin. Image via Sarah Phipps, The Oklahoman

Kevin Durant finished the evening with 26 points, nine rebounds and seven assists as the Thunder rolled, winning their 12th game in their last 13 games. He was helped by Reggie Jackson, who finished with 20 points and 9 assists.

Minnesota was led by Ricky Rubio, who finished with 19 points and 5 assists.

The main reason the Thunder one was because the team came together. After trailing by six at one point, Reggie Jackson was able to add 20 points to the winning cause and become the first NBA team this season to reach 40 wins.

Another thing that helped OKC win was their way of executing 3-pointers when needed. Both Lamb and Derek Fisher shot when it was necessary and helped the Thunder finish the game on a 16-4 run.

The Minnesota Timberwolves are nothing without their star player Kevin Love. Love was out against OKC Wednesday after suffering a stiff neck, which was caused by a fall against the beloved loathed Los Angeles Lakers Tuesday night.

Ricky Rubio finished the night with 19 points for the 'Wolves, but clearly it wasn't enough. For a team to blow a lead like Minnesota did is unacceptable and they should definitely know better.

After winning tonight's game, OKC is 15-1 this season against Western Conference opponents when at home. It also must feel great knowing your team can win without Russell Westbrook and be the most feared team in the Western Conference, and the NBA.

Thunder Wonder: Reggie Jackson. The kid finished with 20 points and nine assists. Everyone knows Kevin Durant is the star of the team, but Jackson should get some lovin' too.

Thunder Down Under: Thabo Sefolosha. The man missed his first seven 3-point shots. Can anyone say practice much?

Thunder Blunder: Kevin Durant's technical. You can't EVER argue with a referee because you're going to be wrong. It's like arguing with an umpire in baseball. You can't argue balls and strikes. You'll never win and you'll get penalized for it. Durant is smart enough to know better than to argue a no-call. Swallow your pride and let your coach do the talkin' because OKC can afford to play without Scoot Brooks than without Durant.

Note: The above is a piece of art created and sold by our site's talented artist (and die-hard Thunder fan), William Bennett Berry. Bennett would like to inform you of a serious threat to his livelihood. The Oklahoma House of Representatives and the Governor are currently putting forth proposals that are aimed at destroying or severely re-organizing the Oklahoma Arts Council. The Council represents very little of our state's budget (1/10th of 1%!), and itsdissolution would result in the loss of many jobs and opportunities for those working in the field.

You can find out more about the situation here and here. Please take a moment to educate yourself on the situation and get involved.