Head to Head: Serge Ibaka outplays Zach Randolph inside and out in Thunder win

Serge Ibaka continues to grow into his own brand of power forward, but how would he survive against the Grizzlies' bruiser Zach Randolph?

Share All sharing options for: Head to Head: Serge Ibaka outplays Zach Randolph inside and out in Thunder win

The Thunder got a measure of revenge tonight, defeating the Memphis Grizzlies, 86-77. In the center of it all was a battle of power forwards. We take a look at the head to head here.

Conflicting styles make for the most interesting matchups, and Serge Ibaka and Zach Randolph are about as different as they come. In 26 previous matchups, Randolph's style delivered 15 wins to Ibaka's 11. On Monday night, though, Ibaka's Thunder bested Randolph's Grizzlies, 85-77, allowing for the debate over which style reigns supreme to rage on.

Ibaka is athletic. Randolph is not. Randolph is a bruiser. Ibaka is not. Ibaka likes to face up. Randolph likes to back down. Ibaka is a pick-and-roll, catch-and-shoot guy. Randolph works best when everyone clears out around him and lets him go to work. On defense, Ibaka controls the paint and blocks shots. Randolph sticks to his man, plays misses, and collects rebounds. While Ibaka's game has grown each and every year, his less physical style has, historically, resulted in being somewhat dominated by Randolph. Again, the wins and losses aren't far off between the two, but the numbers are. 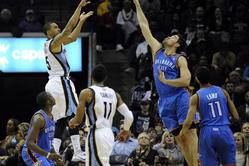 The Thunder relied on their defense to halt the Grizzlies' own winning streak.

Combining the regular season numbers with the epic postseason series in two of the past three seasons, Randolph is averaging 20.8 points and 12.1 rebounds against Ibaka. Ibaka, meanwhile, has managed a paltry 9.5p/6.4r in those 26 matchups. That's only part of it, too. Thunder fans know all too well how relentless Randolph can be. His brutish attitude against Ibaka and the Thunder has resulted in 4.9 offensive rebounds a game to go along with 8.1 trips to the free throw line. Simply put, Randolph has been a physical force OKC has historically had no answer for. Ibaka, meanwhile, has averaged three fewer offensive rebounds and six fewer trips to the line in those previous matchups. While it's hard to complain about Ibaka's game given his borderline-All-Star success, it's not hard to see that Memphis' physical nature is just about his biggest kryptonite.

Ofn this night, Serge surpassed those numbers by halftime.

Major, major thing to take into consideration: Scott Brooks, wisely, matched up the more physical Kendrick Perkins with Randolph on the defensive end. It still left Ibaka with a challenge in itself of having to guard Marc Gasol, but it's something to keep in mind when looking at how the two players' games played out. The thing about this matchup was, Randolph wasn't really any less physical than he typically has been in the past. It was just that Ibaka was more physical than he typically has been, particularly in the first half. He had 12 points and 10 rebounds after the first 24 minutes, including two on the offensive end. Randolph, again, was no slouch on the boards, gathering two offensive boards himself by halftime, but there was something different about their energy levels.

This play toward the end of the half sort of summed up the difference in the two.

As is typically the case, it was the defensive end that was the biggest deciding factor in the outcome. Ibaka is one of the league's best defenders, and his ability to protect the rim makes it that much easier for everyone else around him to guard the perimeter. With opponent's shooting just 43.8 percent against him at the rim - and just 38.3 percent against Perkins, for that matter - it makes outside shooting all the more important for Thunder opponents. When Ibaka and Perkins control the inside the way they did tonight, and Memphis doesn't have guys like Mike Conley to knock down outside shots, it makes it really tough to keep up with the Thunder. No matter how much they clamped down in the second half.

Randolph, for his part, allows a much more robust 52.9 percent at the rim. You could certainly argue that holding this potent Thunder offense to just 85 points is a job well done for Memphis' defense, but it doesn't excuse the fact that much of that scoring came by way of penetration and getting to the rim by going right through the Memphis bigs. That Durant layup was just one example, but the Thunder shot just 4-of-18 from three, meaning much of their scoring came inside. Specifically, it was the screen-and-roll game, and the drive and dishes, that opened up Memphis' defense just enough for the Thunder to come out on the high side.

Most of that came by way of Durant - like it always does - but much of it also had to do with Ibaka. His high screens not only set up his pick-and-roll game with Durant, it also allowed his point guard, Reggie Jackson, more room to create and hit open jumpers in crunch time.

The final line for Randolph: 13 points, 13 rebounds, but on just 6-of-15 shooting and only two trips to the free throw line. Randolph/Gasol combined for 26 on 11-of-26 from the field. A great effort by Ibaka and Perkins - as well as Adams, who played 23 minutes himself.

Ibaka meanwhile continued his latest hot streak, finishing with 21 points and 12 rebounds on 10-of-17 shooting to go along with a pretty ginormous fourth-quarter block.

Randolph's physicality will always create problems for the Thunder and Ibaka. But if Ibaka can find the right balance between being physical, keeping his defender on the move with his athleticism, and also just hitting those shots that have become staples of his game, it should be the perfect recipe to stop Randolph and the Grizzlies. It certainly was on Monday night.

The defense - including Randolph, got caught anticipating a KD jumper. To be fair, it's hard not to look away from KD these days. But someone should have stuck with Ibaka. Instead, three guys lunged for Durant and Ibaka snuck behind them. Durant dished it off for an easy slam.

2) Ibaka missed alley-oop, then lay in

3:57 left in 2nd, biggest lead of the game at 40-33. This is more of an excuse to praise Kevin Durant - as if we need more of those - but Ibaka got a little carried away on an alley oop attempt and it rimmed out. But when KD gathered the rebound, rather than taking the ball to the hoop, he set up Ibaka with an easy layup. Those are the types of plays leaders make. It's a play that, had Durant just finished it himself, Ibaka may have dwelled on for longer than he should have. Instead, Durant's play gets Ibaka a chance to get those two points right back, and forget all about the miss. I see you, KD.

3) Tip in offensive rebound over Randolph with 1:46 left in 2nd quarter.

Just a nice example of Ibaka not giving up on plays and winning an individual battle with Randolph.

Just your classic Ibaka play. Memphis making a run, threatening to make a game of it, and there he is, taking away a sure bucket that would have cut the Thunder lead to three. Instead, it fired up his team heading into a timeout and allowed them a chance to regroup and gather themselves for the stretch run. It may have been the only block he recorded all game, but he certainly couldn't have picked a bigger time.

Play of the game: Swing pass on Sefolosha three with 3:15 left. And here we have yet another shining example of the continued growth of Serge Ibaka. The Thunder had just run this exact set a few plays before, but Ibaka's three-point attempt hit back iron. This time, with Memphis geared up for it, and knowing Ibaka is absolutely capable of knocking down that shot, Ibaka didn't hesitate and made the correct pass to the wide-open Sefolosha for the dagger. These are the little plays that take a guy from being a good player, to being a genuine asset that you need on the floor in big situations. Smart read by Ibaka, and also, just so nice to see him taking this next step in his game.

Positions be damned - we're going with All-Star vs. All-Star, superstar vs. superstar, Kevin Durant vs. Kevin Love. KD plays four sometimes anyway, and Serge has been covered enough lately. Good, I'm glad we talked about this.