The Oklahoma City Thunder took on the Memphis Grizzlies tonight, and earned a triumphant victory in front of their home crowd fans with a final score of 86-77. Kevin Durant started his 30+ point streak anew with 31 tonight, while the Grizzlies were "led" in scoring by Zach Randolph and Marc Gasol, who each managed just 13 points.

For about the first 17 minutes of the game, it was a very close game. I don't think either team managed a lead greater than 4 points in that time, and to be truthful, it was often tied or one of the teams (mostly the Thunder) held a two point lead as neither team executed their offense particularly well. Then, with the score tied 28-28 with 7:22 left, the Thunder went on a monstrous 23-8 run and carried a 51-36 lead into halftime. The Grizzlies pulled closer early in the second half, opening with a 7-0 run of their own and seeing improved play overall in the half, but couldn't completely pull off the comeback. They came within 3 points in the fourth quarter on the back of an extremely balanced scoring effort and improved defensive play, but quickly fell back behind the Thunder by multiple scores.

What is your initial reaction to the result?

It's a great bounce-back win after the blowout to the Washington Wizards, and really, it was a great game overall. The Grizzlies had won six in a row and 11 of their last 12, so it was a job well done by the Thunder to shut down a streaking time. Kevin Durant and Serge Ibaka led the way tonight, combining for 52 points of the Thunder's 86 points. Ibaka was a killer on the glass at both ends, and did a good job of shutting down much of the Grizzlies' post-oriented offense. Durant had a near triple-double (8 rebounds, 8 assists) and made great passes to find his teammates in the first half when he was struggling mightily with his jumpshot.

Head to Head: Ibaka vs Z-Bo 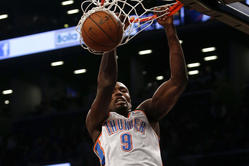 In a battle of contrasting styles, how did power forwards Ibaka and Randolph do in the Thunder win?

Outside of Durant and Ibaka, the offense wasn't too impressive again. The 86 point total isn't too far off from the 81 they scored against Washington (granted, this is skipping out on a lot of context). While KD and Ibaka were great, it speaks volumes that the rest of the team could manage just 34 points. Reggie Jackson shot 6-of-15 for 12 points, and nobody else really impressed.

What was, overall, the main reason the Thunder won?

Tonight, it was defense as the Thunder shut down the Grizzlies and held them to 39.5% field goal shooting. Without Mike Conley, a lot of the Grizzlies' offense went through the big men. Serge Ibaka, Kendrick Perkins and Steven Adams did a great job of challenging them in every area of the game in the first half, and while the Grizz bigs fared a bit better in the second half, it was still a great performance overall from the Thunder's own bigs. Passes down low were denied, shots were challenged and rebounds were fought for. Absolutely nothing came easy for Marc Gasol and Zach Randolph throughout the game.

The ripple effect there was that a lot of shots were relegated to players like Tayshaun Prince (2-of-10) and Nick Calathes (4-of-11), both terrible shooters in spite of Calathes' 22-point explosion on Saturday against the Milwaukee Bucks. I expected Courtney Lee, who's been red-hot since joining the Grizzlies in early January, to fare a bit better, but his shot was off tonight (3-of-10). The only player who could make the Grizzlies pay for committing multiple defenders to the big men was Mike Miller, who scored 11 points on 4-of-9 shooting but missed a few open and potentially game-changing shots at the end of the game.

The defense was great, but I also want to laud the Thunder for a strong performance on the glass. Both the Grizzlies and the Thunder rank among the league's best in rebounding (Thunder are 1st and Grizzlies are 3rd in rebound rate), but the Grizzlies depend on it a lot more than the Thunder do. Often, the Grizzlies win games on Randolph or Gasol dominating the offensive glass and cleaning up the bricks hoisted up by the likes of Prince and Calathes. Tonight? The Thunder held a 44-35 rebounding advantage, a pretty impactful difference. Ibaka had 12 boards, Durant and Perkins both had 8, and Adams had 5. Every member of the Thunder that played recorded at least one rebound.

It's just another part of making things difficult for the Grizzlies' bigs to beast the interior as they often to do. Ibaka, Adams and Perk were getting really physical while boxing out, and even though the Grizzlies held a modest offensive rebound advantage (11 to 10, although they took five more field goal attempts), it was the Thunder that dominated the second chance points in this game with a 17-10 margin. You can't understate the value of that, not against a team that actually has a nickname for when one of their players scores off of an offensive rebound (Z-Bound, for when Zach Randolph does it).

Get back on the, ahem, grind. The Wizards loss was underwhelming, but this win was much closer to the opposite. Durant can get back to doing the thing he does where he scores 30+ points for a lot of games in a row, with 31 tonight. Serge Ibaka added another strong scoring performance to his game log, making it 5 of his last 7 that he has had 20 or more points. Reggie Jackson appears to have gone a bit cold, but hopefully we can get that turned around.

Also of note, Jared Zwerling of Bleacher Report brought up Thabo Sefolosha's name in a list of players that he had heard being discussed in trade talks. My guess is they're looking for a better three-point shooter since he's made a huge regression in that part of his game this season (down to 33.3% from three after shooting 41.9% last season), and the need was visible tonight as the Thunder shot 4-of-18 (22.2%) from downtown. Sefolosha shot 1-of-3 tonight to reinforce his subpar percentage on the season, and in spite of Reggie Jackson's improved three-point shooting in January, this team can often feel lacking in spot-up three-point shooters to compliment its stars.