The sky is falling!

Man, was that an embarrassing loss. For the life of me, I can't figure out why the Thunder couldn't or wouldn't contain Kyrie Irving. Coach Brooks should have known from last season's matchup that Russell Westbrook was going to have a bit of trouble containing him, especially with his still recovering knee. But Brooks left Irving in single coverage with Westbrook a lot, and we all paid the price. Whenever Westbrook would make the slightest defensive gamble, Irving was there to take advantage. Irving was there to take advantage of Westbrooks lack of quickness as well, shooting easily around screens. Even during the few moments Sefolosha was on him, Irving was able to take advantage of any space given for an easy look.

I'm not trying to criticize Thabo or Russ for a lack of effort, though they could have been more attentive. Mainly, I'd just like to inquire as to why Coach Brooks left Irving unchecked for so long. I mean, I know that he had the bigs contain Irving's drive on the pick and roll, but why not just go small and try to pressure him a little bit? He just kept blazing past our defense for easy baskets on the second night of a back to back. By the way, Irving played 45 minutes in Tuesday's game against the Raptors at Cleveland. I'm still shocked at how well he held up.

But, enough about Irving. His plays are crafty, and stars will be stars. What about the amount of effort on our end?

I know that complaining about offense in a game where you shot 48% and scored 104 points sounds absurd. But the offense coming from the bench tonight was downright deplorable. Altogether, they went 8-22 from the field for 24 points with 8 turnovers and 4 assists. Especially disappointing were Reggie Jackson and Jeremy Lamb. Both of them missed wide open jumpers last night, and neither of them could seem to get to the line.

Luckily, there's a really awesome NBA stats site out there called popcornmachine.net. It's got a lot of cool stuff if you wanna check it out, but the feature I'd like to draw to your attention today is the average lead graph. This graph shows you how much each team was leading by during every moment of the game. Generally, average lead graphs look pretty stable, like this one from the Thunder's game against the Heat last week:

As you can see, the graph has definite change, but it doesn't vary itself too wildly. Generally, the Heat were the superior team, and you can easily identify major turning points in the game. Nothing out of the ordinary, really.

Now, take a look at the lead graph from last night:

Yeah. It looks more like a heart monitor than a lead graph, but that's just a testament to how frustrating last night was. There were numerous quick momentum shifts in seemingly random directions, making it really hard to get a feel on the true pulse of this game.

In a game like that, it's really easy to lose focus and stop paying attention to the score. I think that's exactly what happened to the Thunder tonight. There was a singular sequence of possessions where the team's collective head just wasn't in the game, and some really basic errors cost them dearly.

Here it is, described via ESPN's Play by Play: 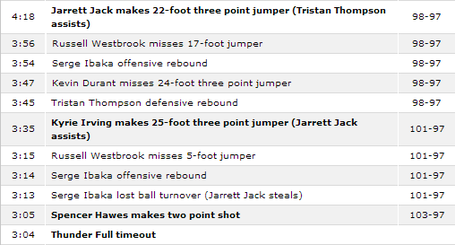 Basically, the Thunder threw away three gifted opportunities at the basket, while the Cavaliers made them look silly by effortlessly hitting wide open shots. Jarrett Jack's first three came because Derek Fisher gambled for a steal, while the Irving and Hawes shots came because the Thunder didn't get back on defense fast enough. Meanwhile, both Westbrook's first shot and Durant's second shot came with no passing and were highly contested. Westbrook's second shot was terrible, as he was double-teamed and missed an incredibly easy pass to a wide open Derek Fisher on the perimeter.

At the end of the day, that's what I feel this loss comes down to. Hustle and effort. The Thunder need to be aware of the fact that they're always going to be slow. So they absolutely must work to get back to their defensive positions and meet their rotations. If they don't, they can get caught in a late game quagmire like the above and keep feeding their opponents momentum.

I mean, there's just no other way you can explain giving away 114 points to this Cavaliers team. The Cavs have scored this much before, but not with three of their most important players injured. It's like they had the perfect storm, with Hawes and Jack happening to heat up from three and their bench providing some surprisingly consistent offense.

Anyway, let's all take a mulligan. Flush this game down the toilet, forget about it for now, and move on. The Cavaliers are of no concern to OKC right now, and the team can afford to absorb a few more losses. But the way down isn't long, and the Thunder are in serious danger of losing four straight games at home.

Thunder Down Under: Russell Westbrook, who is a lot craftier than you think.

Thunder Plunderer: Kyrie Irving, who made the Thunder D look like the extras in an Uncle Drew Commercial.