In Sunday's 125-117 defeat to the Los Angeles Clippers, Russell Westbrook still struggled to shake off the rust in just his second game back from injury.

Those point guards, of course, were Chris Paul and Russell Westbrook. Paul was in his fifth game (plus the All Star Game, if you count that) back from a shoulder injury that forced him to miss 18 games, while Westbrook was in just his second game back after missing the previous 27, due to his 3rd knee surgery in the past year.

Westbrook made several plays that reminded everyone why the Thunder should be thrilled to have him back, but also looked to be a step or two off on a number of others, as he works to regain his timing in the fast Thunder offense. That sharpness will come as he gets back into the swing of things, and Paul is the perfect testament to that. It was CP3 that blended in with his offense and was able to find a rhythm with his teammates, pushing it in transition, feeding the open man, and playing with a more noticeable level of comfort.

Westbrook is still in the forgivable stage of his comeback, though. Rusty performances like this are to be expected. He missed 27 games and his team had started to find a way to play without his helter skelter style of offense. By no means was he bad, and by no means was he severely outplayed by the recovering Paul, but the matchup said a lot about how both players are finding their way back into their respective lineups.

Paul is more of a traditional point guard in that he controls his team's tempo and quarterbacks the entire game. He may be one of the best at doing that since Magic Johnson. He can score, but does it efficiently, with a career true shooting percentage of 57.5 percent. He also can dish it out with the best of them, averaging 9.9 assists per game for his career. He's even considered a top-tier defensive player, being named 1st-team All-Defense three twice and 2nd-team All-Defense twice. 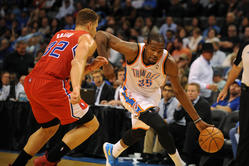 The Thunder defense was rocked by the Clippers and OKC's late game offense faltered.

Westbrook is far less traditional. He uses his aggressive style of play to push the pace of the game and create shots for himself and his teammates. His career usage rate of 29.9 is far higher than Paul's 23.8, and is actually just a tad lower than Kevin Durant's 30.3. That is largely what fueled to the whole "Westbrook shoots too much" criticism that was so popular a couple years ago.

Those murmurs have since died down, mostly Westbrook has done a better job ramping his assist numbers back up, going from 5.6 in 2011-12 to 7.6 last year and 7.5 this year. Oh, and the Memphis series was a nice rejoinder as well, when everyone realized how helpful it is to have another guy to take the scoring load off of Kevin Durant's shoulders from time to time.

The usage, though, is what makes his return far more complicated for the Thunder than Paul's for the Clippers. It's not that both teams don't have the challenge of learning to play off the guy once again, it's that when a guy like Westbrook takes a lot of shots and uses a lot of possessions, the other guys are going to have to figure out how to excel in their own respective roles in other ways.

For the Clippers and Paul, it's more simple. He can ease his way in and, if he's not feeling it offensively, can take a back seat and work other guys into the fold.

For the Thunder and Westbrook, if his offense isn't clicking, ideally he would do the same. It's just that this team hasn't functioned that way since he's been a part of it. The team needs Westbrook's aggressive drives and stop-and-pop jumpers to ignite them. Then the rest of the guys find their way as the game goes on after the defense has already taken the initial Westbrook onslaught.

It's not just in the beginning of games either, but in those lulls toward the end of quarters - like OKC had today - when teams make runs and no one on the Thunder seems to have an answer. The Thunder had found a way to combat that in his absence - mostly just through Kevin Durant - but it almost certainly took its toll.

Part of the challenge is Westbrook's minutes restriction. Again, this is not a criticism of anyone involved, because Westbrook is the second best player on the team and needs to be worked back into the rotation, and also can't be overused to the point of possibly re-injuring himself. The restriction however makes it much harder for that Westbrook onslaught to get fully rolling.

It is important to note that while Westbrook's return has shaken up the Thunder's flow at present, it's not at all a way of criticizing him. It's just that the team played 27 games under a different identity, and did more than OK, so it's going to take some extra time to shed that and get back to the old style that made them so dangerous all these years.

In Sunday's game, Westbrook came out six minutes in just as he seemed to be finding his flow, adhering to the Thunder's prescribed restriction on his playing time. Then, when he came back in the second, it was once again a matter of trying to get comfortable.

Paul, meanwhile, is no longer limited by minutes, and was able to play his usual way. He pushed it in transition often, feeding bigs like DeAndre Jordan on the break, leading to easy baskets. It didn't hurt that his guys (ahem, Matt Barnes, ahem) couldn't miss either.

In the second half, after the Clippers had seemingly scored at will in the first half, it was Westbrook again struggling to find his own shot and put points on the board to match the fast-paced Clippers.

He finished just 3-of-13 shooting for 13 points. Paul wasn't much better, at 5-of-12 for 18 points, but again, Paul played more minutes (40 to 25) and had a far easier time distributing (12 assists). Westbrook only had three turnovers, but seems to struggle reading his guys on the screen-and-rolls from time to time. Pick and roll offense is all about timing, and Westbrook's timing is not there yet

So again, this particular head-to-head wasn't much of a decider in the outcome in the game, but it was a nice insight into how teams can get used to playing with their superstars again. Paul took his leadership role right back and his guys are having no trouble responding. Westbrook is working his way to getting back to impacting games in his own way, but only has limited minutes to make it work. It's a process, and he obviously has shown capable in the past.

Maybe seeing the guy across the court blend back in with his guys with help Westbrook feel more confident he can do the same with his.

1.) Westbrook throws alley-oop to Ibaka to get things rolling in the first quarter.

Before Westbrook had his knee surgery in December, he was showing signs of a tremendous two-man game with Serge Ibaka. It was on full display in this play and Ibaka read Westbrook - much like how DeAndre Jordan and Blake Griffin had been reading Paul - and rolled to the rim. Westbrook puts the lob in the perfect spot, again like any great point guard, and the result is an emphatic alley oop.

It put the Thunder on track, too, after a slow start, and they will need sparks like that from Westbrook going forward.

Westbrook always seems to make it a point to get Durant the easy buckets when he can. Maybe it stems from the criticism that he was taking shots from him and this is his way of saying "Eff you all, watch this." Or maybe he just likes watching KD use his long skinny arms to dunk.

Either way, this one was slightly unnecessary, but it still worked, obviously. Durant even chuckles after, like "Thanks, I didn't need that, but thanks." It's fun to see both guys having fun like this, and it also put the team in good position to make a run at the lead starting out the half.

Westbrook's 3-point shooting is hit-or-miss, but he had already hit one this game. He puts on a nice cross and has plenty of separation. He also has that swag that seems to increase his percentages in big moments.

Of course, you never totally know with him until it goes through. But when it does, and he does his awesome holster dance that I had dreams about in his absence, you just feel like you want him taking every three he possibly can.

Westbrook hitting threes, and his well-known ability to get to the rim, set this one up. He had just hit the three and put down his holsters, and now he threatened to drive after an Ibaka screen. The Clippers, knowing Westbrook's ability to get to the rim, and knowing Ibaka can roll to the hoop and play off Westbrook (see play 1), load up. This leaves Durant open for a skip pass, and Westbrook finds him perfectly in stride.

Great pass. Great knowledge of the situation. This was Westbrook in complete control, knowing his abilities, and knowing what was going on around him. He was playing this well before he went out pretty much for entire games, so this stretch was a nice sign that he can get back to it in time.

Play of the game: Then there was the missed 3-pointer with the Thunder trailing 121-117.

Look, was it a dumb shot? Pretty hard to argue with that. But, to be fair, he hit a near-game-winner against Golden State from pretty much that exact spot earlier in the year.

The Thunder thrive because they have two guys who can step up big in any moment. Westbrook had done is shortly before when he hit the 3 to tie it. He also showed the ability to set up Durant the play after. It's a little confusing though why he would rush a long, contested 3-pointer like that early in the shot clock. But again, it's a matter of getting back to the point where he understands when to push it, and when to pull back and let the other guys get theirs.

Westbrook showed that understanding at times on Sunday. It's just that his matchup, Chris Paul, showed it more consistently.

Let's run it back with Westbrook and see if he can get on track against All-Star MVP, Kyrie Irving, in another point guard showdown.