The Thunder dropped their 2nd home game in a row to a title contender, falling to the Clippers.

The Oklahoma City Thunder lost to the Los Angeles Clippers, 125-117. OKC lost their second consecutive home game after losing last week to the Miami Heat, and they are now 0-2 since the All-Star break. Despite having an early lead and taking a 3-point lead late in the game, the Thunder closed out each half poorly and could not overcome the hot shooting of the Clippers, who shot 51.9% for the game.

The Thunder were led by Kevin Durant, who finished with a game high 42 points and 10 assists, but KD missed 2 crucial free throws with 1:39 left in the game that would have put the Thunder back in front. Instead, Jamal Crawford, who finished with 36 points on the night, hit the last of his 5 3-pointers, pushing the lead back to 4. After OKC and LA traded baskets one more time, the Thunder failed to take another quality shot for the remainder of the game.

The defense, suffice to say, was bad. It was bad for most of the afternoon, recovered a bit in the 4th to give OKC a shot at winning, but was so bad early that for the 2nd time this season the team gave up 72 points at the break. Fortunately the Thunder offense was able to keep up for most of the game, as they managed to score 67 points of their own in the 1st half.

This fact leads me to the thing that really left the sour taste in my mouth, and that is the Thunder offense in the 4th was about as impatient as could be, a quarter where they shot 7-22. This is what their shot distribution looked like: 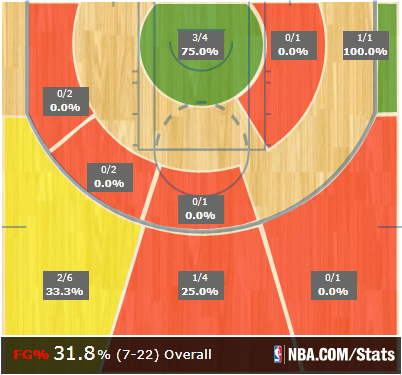 By contrast, here is the shot distribution in the 2nd quarter, where the Thunder scored 35 points: 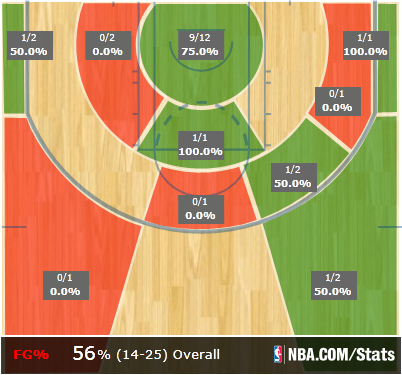 Here is a little bit of reality that I've observed in watching the Clippers a handful of times this season: they are not a good defensive team. To be sure they can play good defense from time to time, but structurally, strategically, and mentally they don't form a good cohesive defensive unit. I was watching them play the Spurs the other night and was texting the game with Pounding the Rock's J.R. Wilco, and we were in simple amazement at how disorganized the Clips were defensively. I quipped that their defensive strategy consisted of "running around with their arms raised." The Spurs, playing without their catalyst Tony Parker, carved them up in the 4th simply by rotating the ball out of the double team, swinging the ball weak side, and then running to the rim for layups.

What frustrated me most from this loss is not that OKC lost or that they played bad defense, but that their offense was so one dimensional and static, even compared to the 1st half, that they never gave themselves their best shot at overtaking the Clips. The offense consisted, at best, of 2 passes and a shot. More often than not, it was one pass and a shot, or even no passes and a quick shot. This has long been my primary criticism at the Thunder offense, especially in the 4th quarter. It is not that it lacks imagination or is overly simplistic, but that these guys, with their big scary claws, just bat the bunny around a bit. Between Durant, Westbrook, Ibaka, and even Reggie Jackson, the Thunder should never be settling for quick contested jumpers, be it against the Heat, the Clippers, or even against the Magic.

The defense will clean itself up once Westbrook gets on the same page again and they start to care a bit more. The 4th quarter offense though, that's a mental processing thing and they need to do a better job of matchup recognition to provide themselves with better chances to win.

Apart from the shoddy defense and the late game offense, the Thunder lost the game with 2 distinct Clipper runs:

1) At the end of the first half with 1:31, the score was tied at 61-61. The Clips went on an 11-5 run over that time. They shot 4-4 from the floor (excluding a last second heave) and hit two 3-pointers, one of which became a 4 point play. In the meantime, the Thunder hit two 3's as well, but also included two Durant turnovers.

2) At the end of the game with 2:43 remaining, Durant hit a 3-pointer to put the Thunder up by 3, 115-112. Over the course of their next 7 possessions, OKC missed 6 shots, all contested, and Durant missed 2 critical free throws. The Clips finished the game on a 13-2 run, and apart from a Durant drive to keep OKC within a basket, the Thunder never attempted another shot that resulted from anything resembling their normal offense.

In total, the Clips outscored the Thunder 24-7 in the span of those 4 minutes and 14 seconds. Given that the final outcome was for intents and purposes a 2 possession game during the Thunder's final meaningful possession, it is not a reach to say that LA won the game in these few moments.

Here is one for ya:

The first zero represents the number of shots Serge Ibaka made in the 4th quarter after scoring 20 points through the first three off of 10-16 shooting.

The second zero represents the number of shots Serge Ibaka took in the 4th quarter after scoring 20 points through the first three off of 10-16 shooting. This is what I'm talking about above when I say that the Thunder have a tendency to make their offense way too easy to guard at times. Durant is Durant and he can do some amazing things, but a big part of the reason why he has had so many open looks over the past 2 months is because he had Ibaka as his release valve whenever double-teams came. If Ibaka is not even being considered as an option to score, it makes the defense's job much easier.

Ibaka was OKC's 2nd best scorer on the night, and the team completely forgot/ignored him in the 4th when they had to keep pace with the Clippers.

The game represents a 3rd consecutive performance where the defense failed to make much of an effort. The Lakers win is somewhat excusable given the disparity in talent level, but failure to show up against two of the best offensive teams in the entire league is not. After going long stretches in the first portion of the season where OKC held defenses to below 40% shooting, the Thunder have now allowed the Lakers(!) to shoot 48%, the Heat to shoot 54.7%, and the Clippers to shoot 51.9%. All-Star break is over, guys. It's time to tighten things up again.

With regards to the Clippers, I don't think that there are enough games left in the season for them to catch the Thunder, so even if LA wins the season series with a win in late April, I don't think it will matter much in the standings. I really believe OKC has a superior matchup advantage against the Clippers, especially so once Westbrook regains his form. Never the less, it is not a good idea to give a playoff contender any sort of mental edge heading into the post-season.

As for the next game, OKC best be careful. Just like against the Wizards, they have a habit of playing down to the level of competition when it comes to Cleveland and end up giving Kyrie Irving a shot to win the game in the end. Ideally, this will be a good game for their defense to reassert its identity, take Kyrie out early, and get back to some winning ways.