If you thought 81 combined points from the Heat's big three was bad, then you might want to prepare yourself before opening this recap.

Share All sharing options for: 2013-2014 Game 56 Recap: Big Three Thrash Thunder, Heat Along for the Ride

Since the Thunder and Heat met in the 2012 NBA Finals, the team have played 11 games. Kendrick Perkins has appeared in all of them. In those appearances, he's logged a total of almost 210 minutes. And in those 210 minutes, he's lodged a -86 +/- rating.

Granted, the Thunder have lost all but 2 of those matchups. And some other players had atrocious +/- ratings in certain games. But no player has been so consistently and undisputably unsuited for his opponent. Furthermore, his absence in the second half of the Thunder's game against the Heat earlier this year sparked a huge run. Thus, his inclusion in tonight's match, in two separate stints, was a cruel joke. The fact that Perk was injured in his later stint was just icing on the cake of that cruel joke.

Of course, what happened to the Thunder tonight can't even be considered a cruel joke. It was more like torture. Every inroad the Thunder seemed to make turned out to be immediately futile. LeBron James had his way with the team whenever he wanted, even completing a dunk after being smacked ruthlessly upon the head. Our fearless leader, Kevin Durant, couldn't seem to make much of anything away from the basket. Westbrook clearly wasn't at his previous form, and Reggie Jackson looked as frustrated as ever. Even Ibaka couldn't seem to have a good day, locked down by the Heat's excellent floor spacing.

So no matter how you slice it, this was a team loss. There's blame to go around in pretty much every single department. I mean, Coach Brooks certainly didn't things off on the right foot by starting Perk, but even if he hadn't played, the team probably wouldn't have won anyway.

Nevertheless, lots of criticism is aimed at the Thunder's superstar. On TNT's Inside the NBA post game show, Shaq and Charles Barkley both went into long anecdotes about how this was a "statement game" and how KD needed to "take his game back". Chuck even had the nerve to call KD passive. I don't want to sound like a angry team blogger, but those sentiments couldn't be more incorrect.

Statistically, Kevin Durant was right on par with his averages in all areas but three point shooting and passing. The drop in three point shooting isn't for lack of trying (he had 6 attempts), and he understandably did less ballhandling with Westbrook back on the team. Durant was also extremely aggressive in trying to get shots near the rim, and was given rest on defense when Perry Jones switched onto LeBron. At the end of the day, aside from hitting a few more shots, I don't think that there's much more KD could've done. In other words, it's not about the way he went about cooking his chili, it's just about how nasty his chili turned out.

The only argument against KD that I'll give credence to is timeliness. There's something to be said for LeBron's early domination of Durant. It almost seemed like a continuation of their battle at the All-Star game, where Durant missed a couple of deep threes and didn't seem ready to challenge LeBron. Tonight, Durant's early forays into the game weren't very awe inspiring, as he seemed to decide on passing before he even got the ball. The result was a few bad turnovers, some bad early offense from Russ, and an offensively moribund first quarter. Durant's play later on more than made up for his follies, though.

Speaking of Russ, his game wasn't the greatest, either. There was an awkwardness about the way in which he moved. It's hard to put my finger on, but he looked like he wasn't ready to turn his body up to 11. Westbrook just didn't have his classic first step, he didn't hit a shot away from the rim, and very rarely ran down the court at full speed. But he still managed to complete his fast break plays, unlike someone I know.....

Yeah, I'm talking about Reggie Jackson. Man, I wish this guy would just learn how to play a fast break. It seems like every time he brings the ball up the court and the Thunder have an advantage, he just gets stuck at mid-range and backs things back out. It's like he's looking to do an extremely difficult bounce pass through his defender's legs, but decides against it at the last minute. I'm not asking Reggie to take a bad shot, but there's no way that his defender should be able to stop him without fouling him in that situation. But really, he's not the reason that we lost tonight.

If we're going name one thing that sunk the Thunder, I'd like to volunteer turnovers. The Thunder had 20 turnovers tonight, with their 15 assists paling in comparison. Those 20 turnovers turned into 27 Miami Heat points, which is more than enough to cover the 22 point gap by which the Thunder lost this game. I'm not saying that all of those turnovers were avoidable, especially with how viper-like the Miami Heat's traps are. But there were definitely a lot of occasions where the turnover was caused by lazy back court play or uncreative playcalling, and you've got to hate that in such an important game. 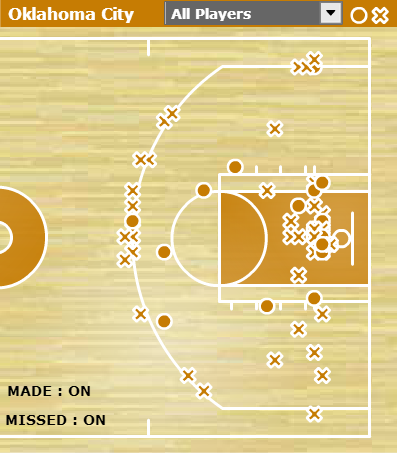 But turnovers are far from the only thing that plagued us. Do you see the above photo? Yeah, that's the Thunder's shot chart from last night. It's obvious that OKC wanted to attack the rim against a team with weak paint defense, and that goal is admirable. But, really? There's five made shots that aren't touching the painted rectangle. Five out of 75 shots taken, and further possessions that resulted in fouls or turnovers. There's simply no way that you can be so one-dimensional and expect to win a basketball game.

How did the Heat shut down so many of the Thunder's perimeter shots? Quickness. A lot of what the Thunder do offensively hinges on their ability to beat traditional lineups. Someone slow guards Perk so that his screens are actually effective. Someone slow guards Ibaka so his mid-range shots are left unguarded. But when OKC goes up against the smaller and more man-to-man focused Heat, those opportunities from Ibaka and Perkins are limited. Thus, the backcourt is left to deal the offenses' fate. Earlier in the season, Durant, Lamb, and Fisher were able to take advantage of those opportunities. Tonight, no one was able to step up. Lamb in particular was poor, missing quite a few open threes and failing to take advantage on a Andersen mismatch.

On the Heat's side of things, this was definitely a huge statement. If you weren't a part of the Big Three, you might as well have not been on the team. I mean, they combined to score 81 points, which is the exact same amount that the Thunder happened to score. But numbers alone aren't what defines their dominance last night. It's how they did it. As I mentioned before, a ton of their points, particularly those of Wade, came off of turnovers. Most of LeBron's points came via simple isolations against several different defenders. By the end of the game, LeBron and Wade were taking so much attention away from Bosh that all he had to do was knock down the shots he was given.

It's hard to come up with something that the Thunder could have done specifically to counter this situation. Brooks did the right thing by putting fresh defenders (including the surprisingly capable PJIII) on LeBron, and a lot of Wade's shots were really well defended. The Thunder's tendency to pressure and switch was also acceptable and admirable, as a bad mismatch is a lot worse than open shots for the Heat's floor spacers or wide-open trips to the rim for Chris Andersen.

At the end of the day, I think of the game like this:

Thunder Down Under: Reggie Jackson, for remaining tactically sound despite some really frustrating play.