The Wizards' John Wall is an All-Star for the first time. How did Reggie Jackson stack up against him? It was a rough night for RJ.

Reggie Jackson got taken to school by John Wall in tonight's key matchup.

When the Thunder and Wizards first met in November, it took a strong fourth quarter comeback for OKC to prevail in overtime. In Saturday night's rematch, the Thunder again trailed Washington after three quarters. Except this time around, Washington held on to snap OKC's 10-game winning streak with a dominating 96-81 victory.

In the key matchup of the evening, point guard John Wall not only dominated his counterpart, Reggie Jackson, he pretty much dominated the entire Thunder squad. 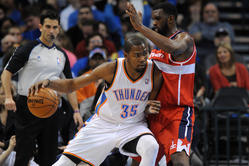 The Thunder saw their 10 game winning streak halted in D.C. What went wrong?

On one end you have a former first overall pick that, four years after being tabbed as a possible franchise savior, is finally kind of actually living up to that billing. Wall, who was just named to his first All Star team, has his Wizards team poised to make their first playoff appearance since 2008. It's always fun when a guy isn't a bust.

On the other end you have a 24th-overall pick who, up until last year's postseason, backed up one of the five best players in the league. While Reggie Jackson The Bench Player was off to a decent start with Russell Westbrook healthy, Reggie Jackson The Fill-In Starter has been more of a mixed bag.

The two teams actually met in November when the Thunder topped the Wizards 106-105 in overtime. Wall had an opportunity for a buzzer-beating layup but had it altered and he airballed it. It capped a forgettable evening for Wall, who finished with just 10 points on three of 13 shooting.

On the Thunder's side, Jackson was still in that comfortable bench role, and it resulted in a decent outing. He finished with 12 on six of 10 shooting, while also pulling down seven boards and dishing out four assists. All in just 28 minutes.

The career numbers are obviously greatly in favor of the more-utilized Wall, but just as with Ibaka and Garnett last night, the per-36 numbers are intriguing. Wall averages 36 min. a game for his career, so his are right in line at 17.5 points, 8.1 assists, 4.4 rebounds and a respectable, if not earth shattering, 2.25 assist ratio.

Jackson's per-36: 14.7 points, 5.0 assists, 5.0 rebounds, 2.0 assist to turnover ratio. So, while those aren't nearly as lopsided, either way you slice it, Wall entered Saturday night with a distinct statistical edge, making him the favorite to win this personal matchup, even if his team was an underdog.

But as it turned out, Wall was so exceedingly good that he overwhelmed not just Jackson, but the entire Thunder.

Wall's final line is just as telling of his brilliance as Jackson's is of his inconsistency. 17 points, 15 assists and, maybe even more impressive than those assist numbers, six steals.

And wouldn't you know it, most of those six steals came directly from Jackson, whose 12 points, eight rebounds and four assists may not look all that bad, but whose eight turnovers were downright ugly. Even more ugly that his six of 17 shooting from the field.

Look, Jackson was bad tonight, and obviously circumstances were different in that first meeting. But if it is any consolation, Westbrook didn't have a very good game in that one, either. He shot just four of 16, recorded just 13 points and four assists, and turned it over five times. The difference that night is that everyone else pitched in. Tonight was just a mess for everyone on the Thunder.

So you can't pin this all on Jackson. Still, his struggles sort of epitomized what was hurting the entire Thunder team. Missing shots, being careless with the ball, and not forcing enough on the defensive end.

The Thunder shot just four of 24 from 3-point range and turned it over 21 times as a team - far exceeding the 14.7 per game they were averaging during the 10-game win streak.

Westbrook is scheduled to return in two weeks. No matter how you view Jackson's numbers in his absence, the fact is the team is 17-7 with Jackson as a starter. He just lost a tough one against a superstar point guard tonight.

- Jackson did have one highlight. And if you ignore things like, you know, the entire rest of his game, his baseline steal with 2:38 left in the 2nd quarter that set up a KD dunk on the other end was pretty sweet. It capped a 14-0 run that put the Thunder within one at 35-34. If only.

- And then, a minute and a half later, Jackson went back to his lowlight reel. With the Thunder down 39-36, Jackson tried leading another break but got carried away and basically tried jumping through John Wall. It was Jackson's second of three charges on the night. And the Wizards responded with a three on the other end. Score one for Wall.

- Honorable mention for the Thunder's other point guard, Derek Fisher. With the Thunder trailing 58-54 more than halfway through the third, Fisher hit one of those ridiculous Fisher threes that you hate when he misses, but love when he makes. Of course, he missed the free throw and the Thunder never got that close again, but it was almost cool. That basically sums up Fisher's entire OKC tenure. Almost good enough to make you not confused why he's in there.

- Wall stole a lazy Durant pass with four minutes left in the third quarter and converted on the other end with a pretty nasty left-handed jam. It put the Wizards back up five at 62-57 and basically killed any residual momentum from that Fisher three.

Play of the game: Wall's steal of Jackson with 6:29 left in fourth. Wall picked his pocket, and threw down the easy two-handed jam for the dagger. It killed whatever small hope OKC had of coming back and put Washington up 89-72. It was also Jackson's seventh turnover and Wall's sixth steal.

Serge Ibaka vs. Zach Randolph is always entertaining, especially because the players are so radically different.