Kevin Durant, the Servant, and what it all means (Update)

Kevin Durant recently disclosed that his preferred nickname is, "The Servant." What does it mean, and why is there such confusion?

Share All sharing options for: Kevin Durant, the Servant, and what it all means (Update)

(Disclaimer - this is a different kind of post, one I've never written before, but touches on Thunder basketball only in an ancillary sense. Its contents may prove to be contentious, that I know all too well. I simply ask that you consider it, and if not, then pass it by and we'll get back to our Thunder coverage in the near future.)

Kevin Durant's star is rising quickly in the NBA, as he has his Oklahoma City Thunder primed to make their biggest splash yet in the playoffs and he's doing it while playing the best basketball of his life. As such, we the fans and we the writers (we're all one and the same, you know) feel a deep need to put it in context, and one of the ways we do is to start assigning labels and nicknames to the events as they unfold. How important is a nickname? To some, it is very important, an identifying feature that the player both fulfills and goes before him, echoing everywhere he roams.

Some nicknames we like and some we don't, and Durant has never been a fan of any of them outside of his initials, "KD." That's good, I think, because we tend to look askew at players who assign themselves a nickname, a la Kobe Bryant's "Black Mamba" or Dwyane Wade's "Flash," or, "WoW."

Being presented with these various monikers, especially in light of his recent MVP-level surge, Durant was asked how he felt about the latest one, "Slim Reaper."  Here is what he had to say:

"That name is what it is...It's cool to have a nickname somebody else gave to you. It's kind of weird if you make your own nickname up. But to have that out there, I guess, is cool. I'm here to shine a bright light. I'm not here to be a guy of, I guess, death. We'll see what happens with that, but I just like KD better."

"Everybody's been loving the name. I think I'm the only one that really doesn't like it too much."

Following All-Star weekend, Grantland EiC Bill Simmons brought Durant into the studio and Durant got grilled on his nickname once again. This time around however, Durant had something with which to counter.

"You can call me The Servant...I like to serve everybody. My teammates. Ushers at the game. The fans...

"I know it's kinda weird to make your own nickname," Durant said, "but I like that one better."

The reaction to Durant's self-descriptor was a varied mix of confusion and, well, frustration. Simmons himself was baffled by the name, but here are some of the more outspoken responses:

Not only is "The Servant" a terrible nickname, it's a nickname that Durant has given himself for all the wrong reasons. It's the kind of nickname that reinforces the fetishization of Durant's "humility" and "graciousness" that started when a post-The Decision world cried out for an egoless anti-LeBron. - Tom Ley, Deadspin

While accurate—in that Durant truly does play for everyone, from his Oklahoma City Thunder teammates to his fans—it's just not catchy, and handles need to be catchy. Not to mention, he seemingly despises Slim Reaper because of how depressing it is, and The Servant isn't any more uplifting. - Dan Favale, Bleacher Report

And on and on.

Since it is apparent to me that most if not all writers have missed the mark on this one, let me step into the space and fill in the gaps on what should be a transparent reference by KD.

Kevin Durant is a professed Christian. Did you know this? You should know this, if you pay attention at all to what he often talks about in interviews, churches, and even on-air controversies.  He carries a Bible with him at all times in his beloved backpack and weaves references into every day conversation that sheds light on his world view. For example, recently when asked if it is strange for he and LeBron to work out together, here is his response:

"It’s not strange. I read the good book. It’s called the Bible, and it says "Iron sharpens iron and one man sharpens another." [Proverbs 27:17] So if you look at it that way, either way you’re playing against a guy who’s at the top of his game and is only going to make you better. So that’s how I look at it."

If further evidence is needed as to where Durant's life focus lies, look no further than the man himself. More specifically, his back. 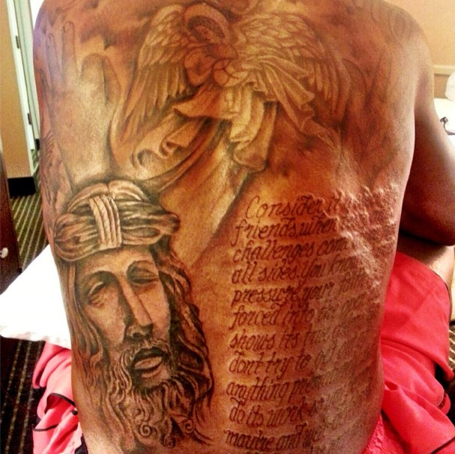 If you can't read it, this is what the text says:

Consider it a sheer gift, friends, when tests and challenges come at you from all sides. You know that under pressure, your faith-life is forced into the open and shows its true colors. So don’t try to get out of anything prematurely. Let it do its work so you become mature and well-developed, not deficient in any way. - James 1:2-4, The Message

This is the context. This is who Kevin Durant is. With that in mind, consider his preferred nickname again, "The Servant," but examine it through Christian theology, not basketball.

"For you know the grace of our Lord Jesus Christ, that though he was rich, yet for your sake he became poor, so that you by his poverty might become rich." - 2 Corin. 8:9

"When he had washed their feet and put on his outer garments and resumed his place, he said to them, "Do you understand what I have done to you? You call me Teacher and Lord, and you are right, for so I am.  If I then, your Lord and Teacher, have washed your feet, you also ought to wash one another's feet.  For I have given you an example, that you also should do just as I have done to you." John 13:12-14

I understand that many readers who read this will not necessarily agree with Durant's profession of faith or his personal conviction to live by the Bible and as a follower of Jesus. There are many different viewpoints on life and spirituality and the point of this post is not to exclude people of different faiths and creeds. Rather, I would ask that you merely consider, for the point of what is good in life, that the approach that Durant has chosen to partake is a good thing. To be a humble servant. To consider others greater than himself. To love others as he loves himself. To, as he says above, shine a bright light into a world that can sometimes seem awfully dark, because darkness cannot comprehend light (John 1:5).

When you take such an approach in life, things like this become the easiest thing in the world.

Kevin Durant keeps being Kevin Durant -- he recently called a 13-year-old boy after he got out of brain surgery: http://t.co/Vszv6dZcEr

Durant has chosen this path to follow in his life, and as he has said many times, it brings him fulfillment and joy. It is the desire to hear, at the end of his days, "Well done, good and faithful servant."

Update: Ever since Durant's Grantland interview hit the Internet there has been much parsing of his words. As we already noted, Durant walked back from his prediction of Westbrook's return and had this to say about the interview in general:

Kevin Durant backtracked on Servant nickname and certainty on RW's status, then said "Let's act like I never did that (Grantland) interview"

We can only speculate what prompted the walkback, but from Durant's quote it is apparent that he regretted doing the interview with Simmons. In a re-watch of the experience you can probably see why, and I'm sure you can speculate on the reasons why Durant regretted it, just as I can.

Of course part of his walk-back included his nickname, "The Servant," which is obviously the entire subject of this post.

Kevin Durant: "I was just joking around with the Servant thing". Said to call him Kevin or KD.

While it is necessary to note his retraction, I don't want to walk away from my own assertions. I don't believe he was joking around when he said it and I think he wants to be taken seriously in this regard. However, my gut instinct, based purely on intuition and speculation, is that he might have been so surprised and dismayed at the backlash over it that he felt the need to set it aside. Too bad, I think, because the name was never about the name, but about his identity as a person. The good news is that he doesn't need the name. He can simply be Kevin, the man who loves to serve, and that is enough.

post script - I recently had the opportunity to be in the locker room with Durant a few weeks ago, and I had hoped that I might relay to him my admiration for his courage in living out his faith daily. I never got a chance to speak to him, so hopefully, if by some chance he reads this, my missed opportunity might be remedied. Soli Deo Gloria.