Beyond The Thunder Arc: Adam Silver is king of the castle, Durant gets a puppy, Big Baby shoulda ducked, and giddyup

Find out who used their abilities for good and who used them for evil this week beyond the Thunder arc.

Share All sharing options for: Beyond The Thunder Arc: Adam Silver is king of the castle, Durant gets a puppy, Big Baby shoulda ducked, and giddyup

We have officially entered the Adam Silver era of the NBA and boy has it been a glorious two weeks for our new commissioner. We have seen all kinds of amazing things in the Silver Age (Get it?) even though it is still in its infancy. So with that in mind lets get right to the awards.

Not the most clever award name for sure but I wanted to bring attention to the few events that have transpired since Adam Silver ripped control of the NBA from David Stern's cold dead hands (figuratively!). We were able to witness the ultra pathetic performance for the ages by the Cavilers vs. the Lakers last week. The Lakers barely fielded a team, then lost a few players to injuries and were down to just five active players. Then one of said five players fouled out but by NBA rule they have to field a team so Robert Sacre was able to stay in the game. What did the short handed Lakers do? They embarrassed the Cavs at home. Like completely embarrassed them. They embarrassed the Cavs so badly that the GM got fired the next day. I had high hopes for the Cavs going into this season and right now they are making the Oklahoma State Cowboys look like a high function basketball team.

That wasn't the only highlight in the new Silver Age we have seen. We were got our first NBA coach firing of the season and shockingly it wasn't Mike Woodson or Mike Brown. Surprisingly enough it was  Maurice Cheeks of the Detroit Pistons. Some how Joe Dumars keeps being allowed to hire and fire all of the Pistons coaches yet he continues to have a job. I look forward to his book "How to hand out bad contracts, hire bad coaches, fire bad coaches, and still keep your job." It will be a fantastic read, and Darko Milicic will undoubtedly write the forward.

Serge really is not known for his selfie game but this one was pretty solid. I mean, he had time to take the pic while he was on his way to audition for a remake of the Thriller video. That said, even though Serge has only been in the U.S. for a few years and is still learning the language, one thing he has a sure handle on is American pop culture.

Is there anything Kevin Durant can't make awesome? The answer is no. Just look at this picture...I said LOOK AT IT!!!! 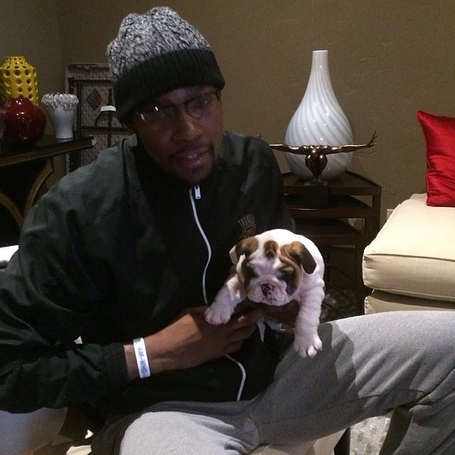 I am not the biggest fan of mascots at all. I find them generally annoying and totally creepy. Now that being said, we finally have a mascot that gets it. The Orlando Magic mascot named Stuff (I have no idea why he is called that and frankly do not care enough to look it up) decided to use the fact that he is an annoying mascot to it's fullest potential. He proposed to Swimsuit model Kate Upton court side at a game.

Now, it takes some balls to propose to a woman when you aren't 100% sure she will say yes but Stuff went for it. Miss Upton seemed receptive to it though.

Kate might want to give this proposal some major thought. I mean Justin Verlander is already hurt and I am sure the insurance plan for mascots is top of the line and it is still less creepy than watching Darren Rovell.

I think we have a love connection on our hands because the lady jogger in this video has a similar running style to Hasheem Thabeet on a fast break.

There are many reasons why I love this video. I am not what you would call the running type. I have been thinking about starting it up to get in better shape but the combination of me being lazy, the blizzard that hit Kansas City, and me being lazy has lead me to get a slow start of the running bandwagon. I get a little annoyed by the avid runners and how they constantly tell you how great it is and how awesome the "runner's high" is and crap like that. So to hear these people talk about how great the texture of snow is to run in then see one of them get a quick reminder that snow is in fact wet and slick and leads to people falling on their asses.

Hasheem Thabeet thinks she had great form as she fell and he would know from experience.

The wild man and All-Star Center for the Chicago Bulls decided to share with everyone his feelings on one of the better known amusement park attractions.

I want to be BFFs with Joakim Noah. He is all kinds of awesome. I look forward to meeting him at NBA All-Star Weekend.

Why did you jump, Glen Davis? Why?!? You have been in this league long enough that you know not to jump. Especially not to jump when it is Paul George. You know, the guy who will be in the dunk contest in a week and is probably going to win it.

By the way, you know what I have always thought would improve the dunk contest? If you had a part where the contestants had to dunk on/over someone. Make it like an in game dunk. I think that would be fun. We could bring back Shawn Bradley and everything.

When I saw this play live I had to do a double take because I was sure it was some kind of optical illusion.

He looks like he is about to lose the ball twice and then makes a pretty sick between the legs cross over and ends jumping off of one leg while not facing the basket, turns and nails the shot. It is interesting that Reggie Jackson and Russell Westbrook share many qualities in their game yet at times go about it in very different ways. They both are super aggressive and have zero fear. Westbrook never finds himself in the, "Oh crap how am I going to get myself out of this situation that I created?" like Jackson does at times. What is impressive about Jackson is he finds ways to bail himself out of these situations and he never lets that deter his aggressive nature.

something something....DANGER ZONE!!!!!!! I know, I am not even trying anymore.

For as much love as I gave the Thunder the other week for their record against the upper crust teams in the NBA, they have some head scratching losses. They have only lost 12 games this season but some of those losses included in that 12 are the Jazz, Nuggets, Raptors, Nets, Wizards, and as of late, the Magic. It is just so odd. I really don't have an explanation for it at all. The losses have come in all different shapes and sizes. They have been blows, losing leads, and game-winning dunks. Thankfully for the Thunder have been REALLY good vs. those upper elite teams.