An exhausted Oklahoma City Thunder team was beaten sorely by a contrastingly rested Washington Wizards team. John Wall was great, while Kevin Durant had 26 points (which is still pretty good, I think?).

A night after the Oklahoma City Thunder blew out the Brooklyn Nets, they came out with the opposite effort against the Washington Wizards at Verizon Center as they lost by a final score of 96-81. John Wall did more than a bit of everything, putting up a sexy 17 points, 15 assists and six steals in the box score. Trevor Ariza led the Wizards in scoring with 18 points, drilling multiple-three pointers and also badgering Kevin Durant on defense. Durant still led the Thunder in scoring, but failed to score 30 for the second game in a row as he notched "just" 26 points on 8-of-21 shooting from the field (no three-pointers, but he did go 10-of-10 from the free-point line).

The Thunder opened the game looking completely drained, falling behind 12-2 in the first four minutes of the game. The offense was incredibly sloppy and also passive, while the defense simply looked disinterested. The Wizards were able to score a bunch of baskets in the paint and on the fast break, while the Thunder's offense stalled. The Thunder were able to pick things back up in the second quarter, eventually tying the game with a much better effort, but it was temporary as they allowed the Wiz to get an early jump on them in the third quarter. They never bounced back after that, not once reducing a Wizards lead as high as 17 points in the fourth quarter to single digits for even a moment.

What is your initial reaction to the result?

Well, that was an awful game. The Wizards have some incredibly fun players, but this is a team that has struggled to execute for much of the season under Randy Wittman. This loss was on the Thunder's lack of effort, and while they were on the second game of a back-to-back, this was really just an inexcusable performance. On a non-Thunder blowout night where KD didn't have it in him to score 30+ points (credit Trevor Ariza for a job well done in challenging Durant, however), nobody picked up the slack for him. Reggie Jackson shot 6-for-17 to score 12 points, bricking numerous shots from outside. Serge Ibaka and Thabo Sefolosha were consistent, but couldn't step up and produce in quantity. Not counting all of the garbage time in the fourth quarter, the bench could only produce 12 points. 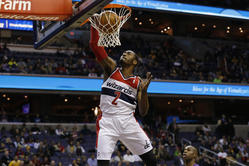 How did Reggie Jackson do against the newly minted All-Star?

For far too much of the game, the Thunder's defensive effort consisted of a half-assed effort to stay in front of ball-handlers while being slow in recovering to outside shooters. Trevor Ariza and Martell Webster burned the Thunder on simple catch-and-shoot threes out of spotting up on a drive. Marcin Gortat and Nene didn't have a particularly tough time of forcing their way inside and scoring from the post. John Wall was simply amazing, creating steals and being a blur in transition while slicing up the Thunder with dribble penetration and making sharp passes when the defense collapsed in.

What was, overall, the main reason the Thunder lost?

The offensive execution tonight will rarely correlate with wins. The 81 points the Thunder scored is a season-low for them, and they only managed 39.7% from the field and 16.7% from three. Too much of the offense was made up of jumpshots taken late in the shot clock, and there wasn't enough of an attack inside. Only about a quarter of the Thunder's shots came at the basket, with even more coming from behind the three-point line. Considering their three-point percentage on the night, that's not really a plan for success.

The Thunder looked their best in the second and third quarters, shooting over 50% in both quarters. Kevin Durant looked his sharpest then, scoring 19 points in those middle quarters. Serge Ibaka and Thabo Sefolosha stepped up for multiple buckets in the third quarter, while six non-Durant players scored a field goal in the second. It was a balanced effort where multiple players were feeding off of Durant and making their shots. The team ran their offense patiently instead of wearily, and for the second quarter, brought the Wizards down to their pace by playing with spirit defensively (script flipped completely on that end in the third).

21 turnovers for the Thunder, with only 9 of them recorded as steals for the Wizards. That should tell you plenty about the Thunder's effort to hold on to the ball tonight. Jackson had eight turnovers, Durant had five, and somehow Kendrick Perkins touched the ball enough times to throw it away three times in just 20 minutes (why am I even surprised). The first quarter was just a mess, with lazy passes thrown that were easily picked off by the Wizards or otherwise thrown out of bounds.

In that third quarter where both the Thunder and the Wizards shot over 50% from the field, the difference was in shot differential. The Wizards had 25 field goal attempts, while the Thunder had 17 while attempting only one more free throw. The troubles went beyond four turnovers in that quarter, but being unable to match the Wizards in scoring chances was how the Wizards claimed the lead for good. They could never organize their offense to give them a chance at getting back in the game either, which was just a bonus for the Wiz.

Tonight, it was unimpressive. Going forward, it's just one bad game in a 82-game season. The SEGABABA (second game of a back-to-back) effort sucked, but the players still have the rout of the Brooklyn Nets fresh in their mind and they're still 38-11. It's not a 30-point showing tonight to kick off February for Durant, but you have to figure he'll get back on that sooner rather than later. On to the next one, y'all – a game against the Mike Conley-less Memphis Grizzlies.