Thunder may need miracle against Rockets

With the Houston Rockets 8-1 and running one of the league's best offenses, the short-handed Thunder will need to pull out a few tricks if they want to keep up.

Share All sharing options for: Thunder may need miracle against Rockets

With nobody anywhere close to returning from injury, the Oklahoma City Thunder are in dire straits. They just dropped an extremely winnable game to the Pistons in overtime, can't get to the line, and are laying a ton of bricks from the field. Now, the Thunder have to face one of the league's most offensively effective teams in the Houston Rockets.

The Rockets don't have many dents in their resume, but there are those who might scratch their head at Houston's 1 point victory over the Sixers on Friday night. Did the Sixers expose some tragic flaw in Houston's system that OKC might be able to use to their advantage? Hardly. It was just a really cold shooting night from Houston's role players, along with fallout from the injuries to Patrick Beverley and Terrence Jones. Unfortunately for the Thunder. Beverley will be a lock to return today, and the Rockets don't normally shoot that terribly. Furthermore, the Rockets only loss this season came with Dwight Howard injured.

Breaking down Thunder vs Rockets with The Dream Shake 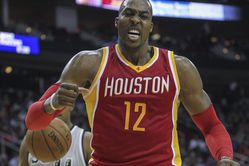 Rockets are flying while Thunder is struggling; what will happen tonight? Our sites break it down with ongoing conversation.

I would point out that the Thunder have historically been pretty good about containing James Harden and Dwight Howard. At this point though, that means nothing. This version of the Thunder has entirely different defenders in both positions. The only real magic stopper the Thunder might have is Kendrick Perkins, who has historically been pretty good about keeping Dwight away from the rim. But Brooks has remained firm about starting Adams, who will likely wax and wane from play to play. Harden will probably have a field day against the inattentive Lamb or whatever other under/oversized player the Thunder throw in his direction.

Beyond Harden and Howard, the rest of Houston's roster basically consists of really skilled shooters and point guards. They'll shoot any attempted zone defense out of the gym. Furthermore, Houston's quick-fire three offense has had historically great halves against the Thunder before, so I see no reason why they shouldn't be able to now. The Thunder's defensive success has mostly come in the paint. Houston doesn't take many mid-range shots, but I have a hard time believing that they won't be able to establish at least something inside and open things up for their shooters.

The tale of the stats does provide some hope, though. The Rockets commit fouls about 24 times a game, good for 5th most in the league. As J.A. Sherman pointed out in the Pistons recap, the Thunder really need to start getting to the foul line. So bulling it into the paint against the pressure-happy Rockets isn't the worst idea, especially with how many shots the Thunder took from outside against the Pistons. Howard might be just as ferocious a paint defender as the Monroe-Drummond combo, but the Rockets have literally no one to back him up.

Looking up and down the roster, it's really hard to find a player that's been able to consistently step it up for the Thunder. Reggie Jackson's been the most statistically effective, but his bad crunch time decision making and propensity to get heated during games has probably cost OKC a couple of wins. Anthony Morrow is a nice shooter, but has suspect D and can go cold like the rest of them. Jeremy Lamb had a nice game against Detroit, but it doesn't completely erase the memory of his other recent catastrophically bad performances. Serge Ibaka seems to be straying further and further away from the rim with each game. Furthermore, he wastes time with bad post ups when he could just be running the pick and roll. The rest of the roster simply doesn't have diverse enough of an offensive repertoire to contribute consistently.

Who do we look to tonight? As I alluded to earlier, I believe it's whoever's on the floor while Dwight Howard is out. Via the Dream Shake's Rockets-Spurs Recap:

"Even with the Rockets at 6-0, with double-digit wins in all six games, there's an alarm sounding in Houston. Not one player has proven to be even competent at filling in at center when Dwight sits. Tarik Black and Joey Dorsey look over-matched, D-Mo has showed even fewer hopeful flashes than we're used to, and Clint Capela showed why he hadn't played a minute until tonight. I'm glad he was out there, but he is nowhere near ready.

Omer Asik, though he was the least likely Rocket of all to stick around after last season, is definitely the biggest loss Houston's feeling right now. With the Rockets bench as thin as it is, even though JET looks healthy again and Big Papa has been a find, any help that would come via trade seems like it would have to come at the expense of draft picks." -Matt Rothstein

We all know what that means. NONSTOP KENDRICK PERKINS POST ISOS!!!!

Anyway, this game is probably going to get really ugly. I know that the Thunder have been able to slow down supposedly offensively good teams before, like Portland. But OKC has never really encountered a team so thoroughly populated with shooters, nor a team that works so often in transition. Barring a weird night, this one should be over by the start of the fourth.

What do you think of tonight's game? Let us know in the comments!