NBPA director Michele Roberts has a few things to say.

Share All sharing options for: Ode to Joy: new NBPA Director Michele Roberts ready to take on the NBA owners

Hey, who is up for a rousing discussion on the legal ramifications of organized labor disputes?

If you're like me and you care way too much about the business of basketball rather than just enjoying/debating the the on-court product (Jeremy Lamb, guys!), you are no doubt aware that the National Basketball Players Association has a new director, and she's a bit different from the old one. Michele Roberts will be directing the NBA union's efforts moving forward and she's got a strong tune to sing, as we covered here at SB Nation upon her arrival. She is a far cry from Billy Hunter, who had more issues in running the NBPA than I care to list here.

She made waves this week by making some bold proclamations to ESPN:

"Why don't we have the owners play half the games?" Roberts said, speaking in her Harlem office to ESPN The Magazine. "There would be no money if not for the players."

"Let's call it what it is. There. Would. Be. No. Money," she added, pausing for emphasis. "Thirty more owners can come in, and nothing will change. These guys [the players] go? The game will change. So let's stop pretending."

That statement is obviously going to get people's attention, most notably from the men she is going to be bargaining with in a couple years. It is an interesting leverage point, to declare your future opponent inconsequential. However, since she doesn't have any leverage at the moment, it makes sense to carve out a slice while the waters are calm.

The question in my mind is, is Roberts angling for a fight, or is this just posturing? Let's take a look at some more statements that she made that have gotten caught up in the news cycle:

"I don't know of any space other than the world of sports where there's this notion that we will artificially deflate what someone's able to make, just because," she said, talking about a salary cap -- a collectively bargained policy that, in its current form, has constrained team spending in the NBA since 1984-85. "It's incredibly un-American. My DNA is offended by it."

"I can't understand why the [players' association] would be interested in suppressing salaries at the top if we know that as salaries at the top have grown, so have salaries at the bottom," she said. "If that's the case, I contend that there is no reason in the world why the union should embrace salary caps or any effort to place a barrier on the amount of money that marquee players can make."

While I am hesitant to parse out each statement here, "let's call it what it is:" this is a rehearsed (she's a trial lawyer, don't ya know) shot across the bow and it isn't too difficult to see that it is an attempt to pique the interest of fans who tend to see pro sports in the basic terms of players vs owners and rich men vs everyone else. Do her statements have merit?

To address the point about how only in pro sports can a league artificially deflate player earnings, the very easy answer is, this is how you create competitive balance. If you have a set number of teams (30) and you want all of them to have a chance to win games on any given night, you have to address the disparity in economics between a Brooklyn and a Milwaukee. To borrow from Bob Costas' astute observation about competition:

"You don't have a game without two major league teams. The New York Yankees make $58 million a year in local broadcasting revenues, but the money comes because they're playing games against other major league teams. Yankee intrasquad games are not broadcast, and wouldn't be watched in such numbers if they were."

In other words, having a LeBron James and a Kevin Durant in your league is nice, but in order to maintain fan interest, they need teams like Memphis and New Orleans to be around so that those great players have another team to play against, and the better the competition, the more your marquis players shine. Without the variety, people will quickly lose interest, which is what we saw during the months leading up to the 2011 lockout. People only care about KD playing pickup ball for so long before they turn the channel (and yet...awesome).

From an economic standpoint, we discussed this also during the last lockout. For sure players like Durant & LeBron can earn their true value in an uncapped salary system, but the problem is that there are a whole lot of players in the league who would see their salaries bottom out if we allowed market forces to take hold. The really, really good players are effectively subsidizing the salaries of much of the "middle class" of players. We would see those players' salaries get cut, and a whole lot of other veterans would be eliminated entirely because their contribution on the court wouldn't justify the expense. While we might argue that the league is not hurting if some of those guys get let go, remember the Costas plan - you need enough bodies to make it worth while. And my goodness, Thunder fans know this better than ever now.

As far as the rookie scale, it has worked as intended. With the rare exception of players like Derrick Rose who won league MVP while still on his rookie contract (to which there is a repair that is called the "Rose Rule," ironically first awarded to Durant), the rookie scale does a good job mitigating the risk involved in hiring young athletes, which when unchecked can cause all sorts of long term damage to franchises. If you don't believe me, then you weren't an NBA fan during the 90's.

In short, this is why the union agrees to a salary cap - ultimately it is good for the league as a whole, making it more competitive over time, more often than not moving it in a progressive direction. The new TV deal is great evidence to support this assertion, as the league has regained its footing by framing player contracts the way they have.  Lastly, the cap exists because it is part of the collective bargaining agreement. The union doesn't 'embrace' the cap; they tolerate it because the owners will never relent on the salary cap, and as we know, would love to institute a hard cap in its place. What we have now is the outcome of that collective bargaining in 2011.

As to her claim that the cap is un-American, given that she's the director of a labor union, I'm not even sure what to do with that.

Roberts also had something to say about another one of the historic points of contention, the age limit:

Forgiving her somewhat tortured analogy to the armed forces, she knows that this has been a point for which the owners have argued and won and are unlikely to relent. If it doesn't make sense that you can make money at 20 but not at 18, well, logic would indicate that those 18 year old players are free to go make whatever money they can find, either in another line of work or by traveling overseas to play professionally.

However, the truth is that the NBA is relying upon settled law, which you might be interested to know involved NFL prospect Maurice Clarett and was ruled upon by Supreme Court Justice Sonia Sotomayor while she was in the 2nd Circuit Court of Appeals. That settled law holds that in collective bargaining, the league and players union can legally establish age limits at whatever is agreed upon. For an 18 year old to argue he is 'denied' entry simply because of his birth date is irrelevant, because it is not just the league, but the union as well that prevent him from joining. I am reminded of one of my favorite lines from our friend Tim Donahue at 8 Points, 9 Seconds. In collective bargaining, "It is a battle of wills. Always has been, always will be. There is no "right." There’s just what is agreed upon."

"We couldn't disagree more with these statements," Silver said. "The NBA's success is based on the collective efforts and investments of all of the team owners, the thousands of employees at our teams and arenas, and our extraordinarily talented players. No single group could accomplish this on its own. Nor is there anything unusual or "un-American" in a unionized industry to have a collective system for paying employees -- in fact, that's the norm.

"The salary cap system, which splits revenues between team owners and players and has been agreed upon by the NBA and the players association since 1982, has served as a foundation for the growth of the league and has enabled NBA players to become the highest paid professional athletes in the world. We will address all of these topics and others with the players association at the appropriate time."

Lastly, Roberts throws out the "monopoly" charge, which gets back to the nature of professional sports.

"No one wants to say it out loud, but it's a monopoly," she said. "And were there alternatives, they wouldn't get away with it."

Well, yeah. And of course there are alternatives. The problem is that none of them are better than what the NBA has to offer.

Legally, pro sports exist in a strange hybrid place of competitiveness and monopoly, which is why antitrust laws are always taken so seriously. If you are interested and extremely, extremely bored, you can read my assessment of this topic, which is also settled law, at my good friend's site The Baltimore Sports Report. Suffice to say, the Supreme Court sees pro sports as competitive in nature but needing the pieces of the whole to work in unison in order to grow the product. This is what Justice John Paul Stevens had to say:

"Although NFL teams have common interests such as promoting the NFL brand, they are still separate, profit-maximizing entities, and their interests in licensing team trademarks are not necessarily aligned..."

"Decisions by NFL teams to license their separately owned trademarks collectively and to only one vendor are decisions that ‘deprive the marketplace of independent centers of decision making ... and therefore of actual or potential competition."

Look back: mediating in the garden of good and evil 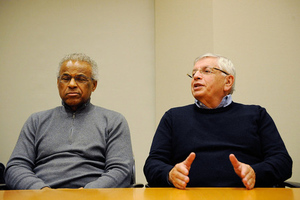 "Words, words, mere words, no matter from the heart."

In summation, Roberts is making assertions counter to settled law, historical precedent, economics, and common sense. Perhaps it is because she made her name in litigation and not negotiation that she's not fully aware of the dynamics, but I think not. I think this is posturing for future leverage, when both sides can start arguing about bad faith dealing. Oh, I cannot wait.

If you've made it to the end of this thing, bully for you.

Now how about a poll?