NBA owners are about to make bank. NBA players are salivating at the prospect of taking a bigger chunk of that bank. Where does Reggie Jackson fit in to all of this?

Steve Pierce at Daily Thunder had a nice piece on the implications that the NBA's massive new TV deal with ESPN and Turner will have on the Oklahoma City Thunder. Pierce does a thorough job of giving an overview on how all of this money will influence Thunder ownership and management, and while most of the points are well made, his claim that this means Reggie Jackson is all but gone is a bit of a stretch.

First, though, it's true that Clay Bennett (and all NBA owners, for whatever that's worth) will have fewer excuses than ever before when it comes to being tightwads. This TV deal alone - not to mention the local TV deals, the ticket/merchandise/concession sales, and the dozens of other ways NBA owners make money - is sure to send team budgets soaring. On top of that, as Pierce mentions, the cap will expand to outrageous new heights, meaning that player salaries will reach unprecedented numbers. 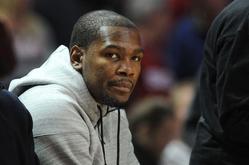 The NBA is going to be flush with new cash from a new TV deal in 2016. What does this mean for OKC?

As can be assumed, this is great news for the Thunder in one big way: they can offer Kevin Durant more money on a longer deal than anyone else in the league in 2016, thanks to Bird Rights. Now, there are about 8 trillion other factors that will ultimately go into how that decision plays out, but if money is the ultimate trump card, the Thunder have to like how this new deal will benefit them there.

Getting to the Jackson contract, I believe a lot of Pierce's speculation is misguided. Here is what Pierce had to say regarding Jackson:

So Jackson will undoubtedly opt to test the waters next summer and will almost certainly receive a max offer from some owner flushed with a bunch of new TV cash and looking for a starting point guard. This offer could realistically come under a newly expanded cap, which would make Jackson's contract worth much more than players who signed max deals this year. As he will be a restricted free agent, Oklahoma City will have a chance to match any offer Reggie receives - but again, given the looming payouts to the Thunder's core, Presti would likely opt against doing so, clearing Jackson to continue his career elsewhere and leaving OKC with a gaping hole in their roster.

1) I understand where Pierce is coming from in suggesting Jackson would get a max offer - because giving owners this much money creates a burning desire in them to overpay players who don't deserve it - but I think that's far from a sure thing given the current market for backup point guards hoping to become starters.

2) Even if Jackson gets offered a whole boatload of money, the salary cap is set to rise by a reported minimum of $14 million once the new TV deal kicks in. Pierce alludes to an expanded cap, but that's where our opinions on such an occurrence differ.

The TV deal doesn't kick in for two years, meaning that next season's cap isn't projected to rise as dramatically as the following season. However, both the league and the players' union are already in talks to potentially smooth out those cap figures. That agreed-upon cap figure for next season will go a long way in determining how much teams are willing to pay a guy like Jackson in the year before that TV money starts rolling in. Will teams be more willing to dip into the tax for a year knowing that they will be in line to make it all back the next year? Or will GMs get crafty, drafting up back-loaded contracts that take into the account the projected-higher cap in 2016-17? (Recall that GM Sam Presti has a history of this practice, most notably on Nick Collison's front-loaded deal designed to accommodate Durant & Westbrook's future max deals, as well as in the Josh Huestis situation)

Regardless of how teams plan on approaching this new age, the biggest thing to keep in mind is that every team is in the same boat in regards to cap space. For the Thunder, they are in the unique situation where Jackson should be their fourth-most valuable player, meaning that, in theory, he shouldn't make more money than Durant, Westbrook or Ibaka. Where things get interesting, though, is in the fact that - depending on how much the cap does rise next year, and given the fact that Kendrick Perkins' contract will finally be coming off the books - it's not out of the realm of possibility that Jackson could get an offer awfully close to that of the Thunder core players, at least in terms of dollar amount. Even more interestingly, the Thunder could absolutely afford such a deal, given those two factors.

In fact, OKC may find itself with even greater flexibility than it does now. Per Zach Lowe at Grantland:

Even the Thunder, a tiny-market team with its transcendent player set for free agency at exactly the wrong time, could have honest-to-god cap space during Durant’s free-agency summer — enough flexibility to add the game-changing fourth cog they couldn't lure last summer.

What Pierce goes on to suggest is that such a deal would backfire in the long run as Durant, Westbrook and Ibaka signed their new deals in the years to follow, making it impossible to afford without going deep into the luxury tax. That, too, is where he may be underselling what the Thunder can offer, because that extra-large cap jump would be coming just in time to accommodate those larger max offers for Durant and Westbrook, and maybe even Ibaka. No matter what the figures are, whether they went up or not, Jackson would still be getting paid as the fourth-best player on his team, just as he would have been before any of this new TV money came into the equation.

Again, this is where Pierce's argument may end up winning out, because if a team ends up offering Jackson a max deal, then he's right in assuming Jackson won't wear a Thunder jersey anymore. But where I find that misguided is in assuming this excess of money will all of a sudden increase Jackson's market value. At this point, Jackson is what he is: a backup point guard that could start on plenty of teams in the league,  but with plenty left to prove. On top of that, point guard is a position in today's NBA that is flush with new and growing talent, and the idea that owners would risk shelling out max money on a guy like Jackson when they could very likely find a guy of at least comparable talent for less money (or even draft another one) makes things complicated. Put a different way, if Eric Bledsoe didn't get a max deal, it's going to take a tremendous season, not just a new TV deal, for Jackson to get a max offer for himself.

None of this is to take anything away from Jackson, who at this point is as much of a bargain as anyone in the league. He is due his fair share, and he shouldn't be blamed for taking the route that will best determine what that fair share is.

This is all wild speculation, of course, and the bigger issue may still be that money isn't as important for Jackson as just being an everyday starter. Still, that TV money is going to come rolling in very soon, and Reggie Jackson will be the first Thunder to get a real taste of the impact it will have on player contracts in the future, and just how much owners are willing to throw it around.

This TV deal, while adding unprecedented money into the equation, still doesn't affect the value of a guy like Reggie Jackson. It simply means there will eventually be more money to be spent, shifting the entire economic curve. How much money won't be clear until after the season, and it's unlikely to be astronomical until the TV contract kicks in in 2016. So while Jackson is set for a huge payday after the season, it could just as easily come from Oklahoma City as anywhere else, because while his salary could look massive in 2015-16, it will begin to correct itself in 2016 as that TV deal kicks in and the salary cap expands.

Will the Thunder re-sign Reggie Jackson?