The Thunder played a complete game against the young Celtics and used a big 2nd half to put the game out of reach.

The Oklahoma City Thunder earned a solid win at home over the Boston Celtics, 119-96. Playing on the 2nd night of a back-to-back, there were obvious questions about how the Thunder would be able to perform after a huge come-from-behind win over the Timberwolves on Saturday. In that game, Kevin Durant erupted for 48 points, but was on the court for all but 5 minutes, meaning that there might have been opportunity for the Celtics to jump on the weary Thunder.

Fortunately for OKC, Durant took a back seat for most of the game and gave way to Reggie Jackson. Jackson had struggled as of late, but against the Celtics he scored a career high 27 points on 9-12 shooting, including 3-3 from 3-point range. Jackson kept the Celtic defense on its heals and led to his team getting numerous open looks at the rim.

The Thunder entered the 4th quarter up by 14 points, and I'm sure for most OKC fans, thoughts of their two losses last week probably came to the surface. Not this time though. OKC raced out on a 9-3 run to start and continued to build their lead throughout. At that point, the game was mere formality and Durant and Jackson never had to return.

The Thunder were led by Jackson's 27 points, and Kevin Durant finished with a subdued game of 21 points, 7 rebounds, 8 assists, 3 steals, and zero turnovers. The Celtics were led by former Thunder player Jeff Green, who finished with a team-high 19 points along with 1 rebounds. Thunder fans will smile at that.

After the game was over, there were a number of post-game handshakes between the two teams. There are still deep relationships between guys like Kendrick Perkins and Rajon Rondo, as well as Durant and Green. It was cool to see KD and Green embrace with Durant pretending to block the cameras so that he could have a personal moment with his friend.

There is always the chance for a let-down after: a) a big emotional win; b) a back-to-back game; and c) against a weaker team trying to define its season against the best.

Fortunately for OKC, they were able to overcome all three of those. For most of the first half it was a close affair, as only 2-3 possessions separated the teams. The Celtics were surprisingly competitive on the offensive end, making over 60% of their 3-pointers in the first half and shooting a high percentage overall. The Thunder were keeping pace, mostly on the shoulders of Jackson, but there certainly was space for OKC to have a let-down in the 2nd half and slip up again the way they did against Brooklyn. The Thunder finally made a timely run at the end of the 1st half, getting multiple long outlet passes from Kendrick Perkins, who was doing his best Kevin Love impression by firing full court chest passes to a cherry picking Durant at the other end. The Celtics' strong shooting eventually wore itself out, and the Thunder's talent took over in the 2nd half.

- Jackson was the star of the game, and I'm happy for him because he was beginning to look a bit wobbly on his feet. It is becoming clear that he, like Russell Westbrook, needs to be a score-first kind of point guard. Jackson has to be looking to attack in order for his passing instincts to take over, and he can trust his shooting instincts because he doesn't force a lot of bad shots. He only took 12 shots tonight, and only had 2 assists to go along with it. Meanwhile, Durant played facilitator, accumulating a game-high 8 assists.

- You know who was 2nd on the team in assists? Jeremy Lamb. In 23 minutes, Lamb scored 13 points but also handed out 6 assists against no turnovers. Keep an eye on this, because once again he was running the best pick and roll offense with the Thunder bigs. He has a very natural way of curling off of screens and with the ball out in front of him he maintains passing angles to toss pocket passes. Serge Ibaka had the most daylight to shoot that he's seen in 2 weeks because of it.

- Kendrick Perkins, offensive juggernaut. Perk finished with 12 points and 6 rebounds against his former team. Too bad his former teammate Kevin Garnett already got the best of him.

- There was a Hasheem Thabeet sighting. Not only that, but the Thunder were actively trying to feed him the ball on the block (to comical results). To Hash's credit, he only needed to shoot from the perimeter. He faced up and knocked down OKC's final 2 points of the game from 12 feet out. We like to rib Thabeet around here, but at the end of the day it is very clear that his teammates think a great deal of him and were happy that he made a basket, and not in a condescending way. Every contending team needs guys like Thabeet who bring the joy and energy, even though they never play meaningful minutes.

The Thunder used multiple bursts in the 2nd half to put the game out of reach. Unlike the Celtics, who eventually cooled off after a big first half, OKC kept the offense flowing. Gone are the days of Boston's vaunted defensive rotations and tenacity. Boston is looking for a new identity now, and it will probably be a while before defense is a part of it.

On the night, OKC shot 51.8% from the floor and 47.4% from 3-point range. They also outscored Boston 50-34 in the paint, mostly in part due to Jackson and Durant's ability to drive the ball to the rim. Here was the Thunder shot distribution: 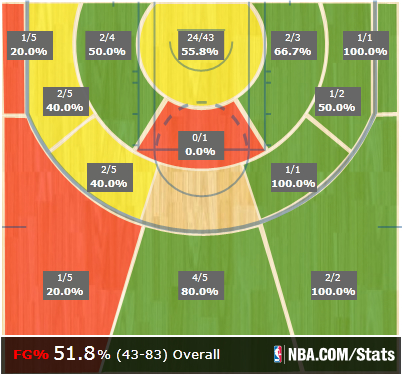 The Thunder played great facilitating offense on the night in order to produce those high shooting percentages. OKC rang up 28 assists on 43 made baskets, led by Durant and Lamb.

What I liked most about the ball movement is that it produced a high number of good 3-point looks against the Celtics defense. It isn't hard to take 25-30 3-pointers in a game when you have little discretion over it, but I thought that the Thunder were creating good, open looks and doing it for the right players. Lamb finished 3-5, Jackson went 3-3, and Derek Fisher finished 2-3 on the night.

With the proper spacing, it opened up the middle for Durant, who as you can see in the video above had a bit of a surprise waiting for guys like Perkins.

The Thunder have now won 2 games in a row and the table is set for them to go on another winning streak against some of the weaker teams in the league. It is not until they face the Rockets and Warriors on another back-to-back that the Thunder face teams that are both talented and competitive.

Hopefully this is a corner to be turned by Reggie Jackson, who needs to feel confident in order for his game to matter on a nightly basis. Once again the bench stepped up, led by Lamb and Fisher, and that group is going to continue to have great opportunities to alter the course of the game.

Lastly, Durant got a lighter work load, which was paramount after going HAM last night in Minnesota.