Who in the NBA deserves acknowledgement for their basketball achievement and who will get made fun of this week? Only one way to find those answers.

Share All sharing options for: Beyond The Thunder Arc: Durant supernova, Westbrook crazy eyes and more

Holy crap! What a week for that little team from Loud City. Kevin Durant and the rest of the Thunder continue to impress and are crossing more tasks off their list than The Bride. Lets not waste too much more time and get right to the week that was for the Thunder and the NBA.

Hasheem Thabeet Selfie of the week -

Thabeet should have hashtagged #Backiatomy because I assume he needed one after bending over to take this picture with the 5'10" Reggie Jackson.

I have seen this picture of Jeremy Lamb before but the text on it this time makes it that much better. Well played Mr. Lamb.

I mean seriously how awesome are these  GIFs?

In fact, I think we need some Kill Bill sound effect:

Russell Westbrook is the only person that can make him being injured as fun as when he's on the court. Although I must say I am pretty pissed at Westbrook fashion game the last few weeks, it has been a bit blase by Westbrook standards. Not crazy print shirts or crazy ass pants. It is way too tame and one thing we have come to expect with Westbrook's wardrobe is loud and in your face.

Oh..and in case you forgot Westbrook is still a pretty awesome person.

In a twitter Q&A with some fans the Slim Reaper took a more humorous approach when asked to give his exact height.

6'7 RT @ThatDudeLaron54: @KDTrey5 how actually tall are you?

Sure you are KD. Maybe while you are sitting on the floor when you were in middle school.

The week starts off well enough for the underachieving #1 overall draft pick when he notched his first double digit scoring game and career high 15 points. That lead to the internet doing its usual internet thing 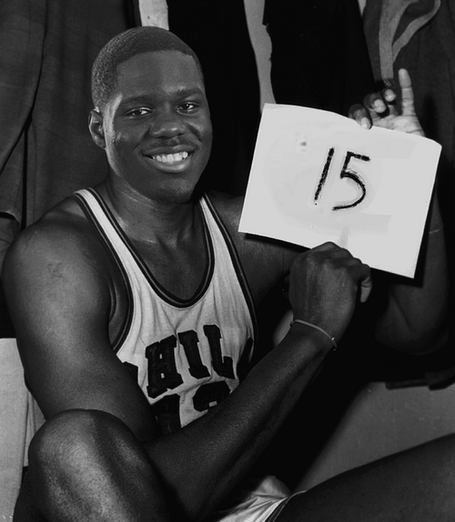 Then things got progressively worse for the rookie as he was left off the NBA Rising Stars pool of rookie and sophomore players. Then the GM that drafted him (Chris Grant) called out the effort of the entire team before their nationally televised game vs. the Knicks. So naturally this happen to Bennett in that game.

The Grizzlies may have won the game but for one brief moment Rudy Gay won at life.

He is becoming a must watch on NBA League Pass for me.

Shocking right? I had no idea Kevin Durant hated the month of January as much as he does. That is the only explanation for the kind of punishment he has inflected on the rest of the NBA this month. For the month KD has posted 36.6 points, 6.3 rebounds, 6 assists, 1.7 steals and shot 54% from the field. Oh...he also did this to the Hawks on Monday night

Thunder stand pat this week on the WW Empire Scale basically because I reserve a 10 for something like making the NBA finals and/or winning the NBA Title. After watching the Thunder get down by 22-4 vs. the Heat and then witnessing them come back to dominate the defending champs in the second half I started thinking about what teams the Thunder have beaten this season. The list is pretty damn impressive.

They have 3 wins vs. the Spurs, have beaten the Warriors, Rockets, Hawks twice, have wins over the Clippers, Suns, Grizzlies, Blazers, destroyed the Pacers at home by 24 and lead on the road vs. the Heat by as many as 25. No other team can boast about having those kind of wins this season. What is most impressive is the Thunder beat the Rockets, Warriors, Blazers, Spurs, Hawks and Big 3 of the Heat without Russell Westbrook. A player who, when healthy is a top 10 player in the NBA. The Thunder are back to getting great production from the default secondary scorer in Serge Ibaka and the bench has stepped up huge during this winning streak. It also helps that their defense has been pretty stellar and they are play very intelligent and complete basketball. The elephant in the room is who will they play once Russell Westbrook comes back from injury and if they would have played this well with him starting. You can't help but get better when you add a player the caliber of Russell Westbrook.

I keep waiting for the other shoe to drop when it comes to this team and the stellar play of Kevin Durant but as every game passes the chances become more slim that it will happen. The Thunder are hands down the best team in the NBA. Everyone else in the Western Conference is now playing to see who gets beat by them in the conference finals.