Kevin Durant vs LeBron James: Has KD caught the King?

Kevin Durant kept rolling Wednesday night and helped lead his team over the champs. Are the scales tipping in KD's favor? We break it down.

Share All sharing options for: Kevin Durant vs LeBron James: Has KD caught the King?

In a rematch of the 2012 NBA Finals, the story was every bit about the two stars as it was about two championship-favorite teams. It lived up to its billing.

The almost unanimously-held belief over the past two seasons has posited that Lebron James is the best player in basketball, Kevin Durant is second, and then there is a bit of a dropoff to the next tier. Any challenge to that belief is snuffed out pretty quickly. Lebron James is King and, until recently, there is little debate.

Looking at both guys' career numbers coming in, it's actually pretty hard to disagree with that sentiment. The advanced numbers are telling, and illustrate just how close two are, while also showing why James holds the edge.

Durant's one hold is in true shooting percentage where his .598 tops James' .579. The two also boast close-enough effective field goal percentages and offensive ratings, that the debate of "who is better?" is certainly warranted. But Lebron possesses the significant advantage in PER at 27.7, as well as defensive rating at 102, compared to Durant's 24.3 and 105. 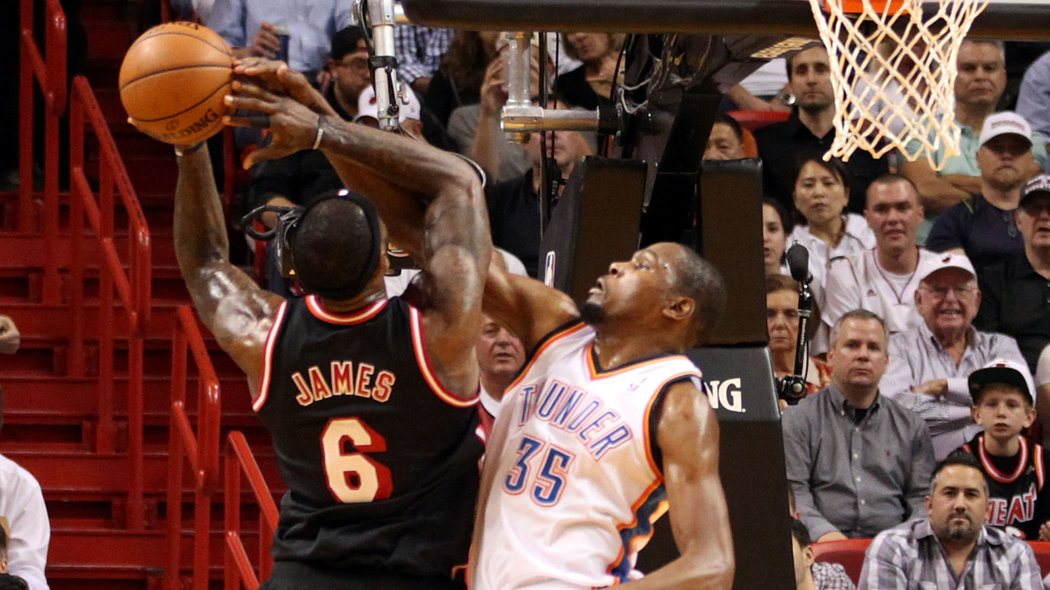 Behind Durant's 33 points, the Thunder beat the Heat in Miami, their first win over the Heat since the 2012 Finals.

In the more traditional metrics, James can boast a further advantage over KD. His 27.5 point/7.2 rebound career average is slightly ahead of Durant's 27.0/6.9, but it is Lebron's 6.9 assists per game - in comparison to Durant's 3.3 - that have always given Lebron the "better all-around player" moniker.

Then of course, there are the two biggest differences: Lebron James' championship rings. Two of them.

It wasn't long ago when the Lebron vs. Kobe debate was the hottest thing in basketball. No matter how many arguments were had, the one trump card Kobe-defenders knew they could always unleash was "five to zero." That all ended when James finally hoisted his first trophy, and that debate slowly diminished.

On top of the rings is James' other collection of hardware, his four MVP trophies. Another thing Durant has never won.

Which is why a renewed KD vs. Lebron debate has become such a welcome one this year. For the past two years, no matter how well Kevin Durant played, and no matter how much he and his team grew, the rings and the MVPs were the beginning and end of every argument. In many ways, they still are.

It wasn't just the Finals where Lebron owned KD in head-to-head matchups. In fact, coming in to Wednesday, the two had met 16 times (counting those five Finals games) and Durant lost 13 of them. Their numbers in those 16 games?

Once again, Lebron's assist totals are the biggest difference. Watching those games, it makes sense. James controlled those games. He was in charge of everything on the floor and the assists reflect that. Durant, meanwhile, found himself in most of those games trying to shoulder the load himself. Granted, he had Westbrook to take much of the distributing burden off his shoulders, but he still never established himself quite the way Lebron did in the previous matchups.

But for Kevin Durant, in spite of all of this, constantly being one-upped by Lebron, always finishing second in the MVP voting, watching Lebron hoist the Larry O'Brien trophy right in front of his face, basically, as his quote in Sports Illustrated said, just always being second - Wednesday night may have ignited the debate more than ever.

Because for the last month, in spite of playing his best ball of the season, it has been James looking up at Durant. The 27.8 points, 6.5 rebounds and 5.9 assists for January are scary-good taken in isolation, but not nearly as much so as Durant's almost-otherworldly 36.6/6.3/6.0 line over that same span.

Durant's PER of 31.1, if it holds, would make him just the fourth player in history to finish with a PER over 31, joining Wilt Chamberlain, Michael Jordan and, wait for it, Lebron James as the only other player to do so. James does hold slight edges in true shooting and effective field goal percentages, but Durant's higher shot volume makes his similarly outrageous numbers in those categories just as impressive.

Perhaps most surprisingly, is Durant's ability to claim defensive superiority over his counterpart. Royce Young at Daily Thunder detailed this in depth on Tuesday, but some of the highlights are staggering. The 100-105 defensive rating advantage, the 2.9-1.8 defensive win shares advantage, the edge in block percentage and steal percentage, even the on court/off court defensive differences.

While the sentiment all year has been that James is the best player and Durant is second, in terms of the current season, Durant's claim to the MVP trophy may be stronger than we even expected.

Of course, none of this really mattered entering Wednesday's game. Because despite Durant's numbers and slight lead in the MVP race, all it would take is one night of Lebron James shutting him down, or at least slowing him down, to get all of that momentum back in his favor.

But KD is tired of being second.

With 2:25 left in the 3rd quarter - after OKC had turned what had been an early 22-4 Miami lead into a 78-62 Thunder lead, and after the Heat then reeled off six straight points to cut the lead to 10 behind a James layup and threatened to make a game of it - KD struck with what may have been his loudest, meanest shot of the year. And with the streak he is on, that's saying something.

Durant calmly dribbled up the right side of the floor, didn't hesitate, and splashed a 28-footer. Bang. Nothing but net. In Lebron's face.

James responded with a layup, and the two went back and forth a bit, guarding each other tightly, trying to incorporate their teammates along the way. It was the type of sequence that everyone was hoping for coming into the game. The two best players in the game putting their skills to use against one another. Just as one gained the upper hand, the other responded.

That is, until Durant hit his second dagger with 40 seconds left in the quarter, a 26-footer to stretch the Thunder lead back to 14 at 88-74.

The final numbers are almost too perfect for this "changing of the guard" narrative. James, with 34 points, actually outscored Durant's 33. However, unlike in the past, it was Durant who was in control throughout, adding seven rebounds and five assists to James' just three and three.

Where does that leave things?

Obviously, just as it did in the Kobe vs. Lebron days, the throne continues to be occupied by James, and will be until Durant makes that final step and wins a ring for himself. Even then, the debate may rage on. Because, for the time being, Lebron James is still the best basketball player on the planet. One game, one hot stretch, heck, even half a season doesn't change that. Even a half a season like Durant's.

But for 2013-14, and particularly after Wednesday night, the MVP trophy is now Kevin Durant's to lose. If he can somehow continue this into the postseason and a potential Finals head-to-head rematch with his rival, that may no longer be so much of a sure thing.

The title of "best basketball player alive" may still be up for grabs after all.