So, the big news tonight is that Steven Adams very nearly got the first DNP-CD of his career. With the fast-paced Heat making mincemeat of Kendrick Perkins on every single offensive possession, the 7 foot Kiwi wasn't seen to have much value on the court.

Since this game didn't feature much influence from the sovereign island nation, I thought I'd make up for that in tonight's recap by structuring it around an infamous New Zealand viral video, brought to my attention by the great commenter Edmund Joseph....

As you can see from the first few seconds of this video, all seems to be right in the world of Nek Minnit. The gentleman, obviously a product of skating culture, is spending what seems to be a temperate day outside. He also is participating in activities that would go along with such a setting, such as standing and leaving his scooter outside of the convenience store (dairy).

As you could see from the first few minutes of the infamous Thunder game tonight, all seemed to be right in the world of NBA basketball. Kendrick Perkins was having a really hard time keeping up with the Heat's lineup on defense, Reggie Jackson was having problems getting past Mario Chalmers, and Serge Ibaka turned into an offensive black hole. KD was nowhere to be found, and it seemed that the Heat were on their way to cruising past the Thunder for the 7th straight time.

It might seem strange to showcase a single two word phrase, but this is a pivotal point in the viral video. If you're incapable of understanding the New Zealand accent, the words he uttered were "Nek Minnit". That phrase is meaningless to you now, but if this video has told you anything, it's that this gentleman is very deliberate. He refused to engage in any sort of pleasantries before even attempting to explain what has happened to him up to this point. In fact, his prior statement wasn't even a complete sentence. Thus, it's apparent that something serious is about to go down.

The Thunder found themselves at a similarly pivotal point with about 6 minutes to go in the first quarter. With the entire team struggling, Scott Brooks knew he had to make some changes in the lineup. Kendrick Perkins' night was already over and the Thunder had just gone to Jeremy Lamb, but Scott Brooks could sense that Reggie Jackson was frazzled. In came the the NBA's oldest and most experienced point guard, Derek Fisher.

And then, all hell broke loose. What would seem to be an otherwise banal situation has suddenly taken a turn in a totally unexpected direction. I mean, it'd be one thing for this gentleman's scooter to simply be stolen, as I'm sure has happened to many of us in the past. It would be another thing for his scooter to be lying there, untouched. But to see the scooter completely obliterated in such a barbaric fashion had to be extremely disheartening for those at hand.

For those on hand to see the Heat take on the Thunder, emotions had to be on a similar level. It started with a isolation of LeBron James on Kevin Durant in the left post. LeBron backed in and had his shot blocked. He quickly got his own rebound and attempted to recover with a quick pass outside, but Chris Bosh couldn't manage to nail an open three. Everybody sprinted up the floor, ball movement ensued, and Derek Fisher hit a three. The Heat called timeout, up 7-22. It might have seemed precautionary at the time, but the Thunder never looked back, outscoring the Heat 48-28 during the rest of the first half.

What was the difference? Speed and ball movement. I broke the issue down heavily in my preview, so be sure to check that out. But the Cliff Notes version is that the Thunder did an awesome job of pushing the pace, keeping lineups lean, and moving the ball. In the third quarter, the Heat's propensity to foul really sealed the deal for them, giving the already nasty Thunder offense some really easy shots at the line. 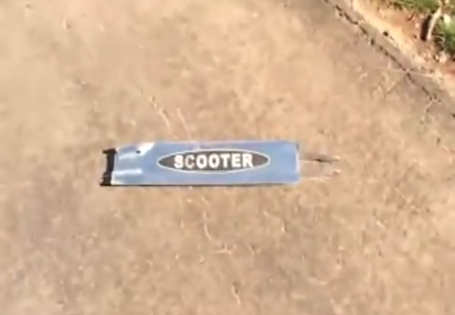 Of course, I can't go any further in this recap without mentioning this last bit of hilarity hidden within the video. In case you didn't notice at first, the scooter is literally branded, "Scooter". That means it was probably picked up for pennies on the dollar at New Zealand's equivalent of Wal-Mart, and arguably made of cheap parts. But the fashion in which it was destroyed is just unfathomable. I mean, was the scooter really that cheap?

I ask a similar question of the Miami Heat. I mean, they're not that bad, are they? They finished this game shooting 51.4%, won the rebounding battle, and actually managed to move the ball better than they normally do. But their poor three point shooting and turnover rate absolutely destroyed them. We already know that their drastic failure in those 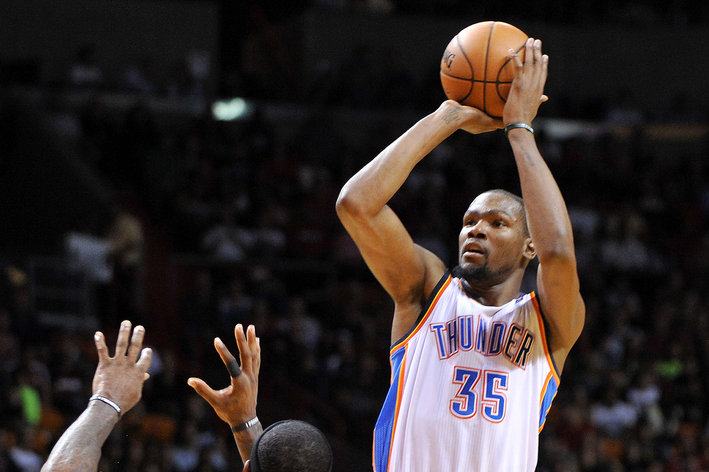 Paul Flannery wonders whether the Thunder win was a harbinger of things to come, or just a January blip?

categories was pretty much a result of the Thunder's willingness to play the Heat's type of game. My question is, what do the Heat do now to respond? They experimented with some big lineups (with Andersen and Bosh in the game), but the results were extremely inconclusive. Unless they alter their strategy in some significant way, their days of dominating the Thunder are over. Of course, dominating and winning are two entirely different issues, and I'd expect the Heat to have more bite than bark when we face them again in just over three weeks. (!!!!!!)

Thunder Wonder: Kevin Durant, 33 Points and a huge chunk of the first half run.

Thunder Down Under: Serge Ibaka, who had the biggest Nek Minnit of any player on the team, finishing with 50% shooting.

Thunder Plunderer: LeBron James, with a seemingly forgotten about 34 points.

Want more of this analysis during the game? Look no further than @WTLC on Twitter!