No Durant? No Westbrook? No problem.

The Oklahoma City Thunder defeated the Boston Celtics, 101-83. Surprising the Thunder fanbase, Kevin Durant was a late scratch and did not play. The team's announcement was that he was going to rest a sore shoulder due to a minor injury he sustained in the Thunder's win over the Spurs. While it was expected that this would make it a much closer game between what was essentially the Thunder's 2nd unit and the rebuilding Celtics, it was anything but. OKC used a dominant 3rd quarter to give them an 18 point lead heading into the 4th quarter and they never looked back.

The Thunder were led by Serge Ibaka, who finished with 21 points and 7 rebounds. He was joined by Jeremy Lamb, who played an all-around stellar game, finishing with 19 points, 6 rebounds, and 3 assists. He led a bench unit that finished with 38 points overall, and the team shot a combined 53.8% from the floor.

The Celtics were led by former Thunder Jeff Green, who finished with 16 points, 2 rebounds, and 1 assist. Rajon Rondo, who is seeing his first action since tearing his ACL, finished with 5 points, 8 assists, and 3 turnovers.

My first reaction to hearing that Durant would not be playing was not disappointment but intrigue. For the past 5 games, Durant has operated as the center of the Thunder universe and everything has flowed through and out of him. As a result, all of his teammates have been playing off of him and excelling in their own roles. What would happen when the center star and his gravitational pull was removed?

As it turns out, something really remarkable.

First, the obvious caveats. The Celtics are not good this season and they're getting worse (intentionally?). They have Green and they've got back Rondo, but they are likely playing out the string and planning for what their future moves are. That said, what the Thunder crew did without Durant and Westbrook was a lot of fun to watch.

After a wobbly start to the game where the Celtics got out to an early lead, the Thunder fell into a natural rhythm with all of the parts operating only marginally better than they normally do. In fact, it wasn't so much that each guy did more; if you look at the box score, there isn't an individual stat that jumps out for any particular guy. Rather, it was that EVERYBODY did their part on the night. On most nights, Durant + Ibaka + Jackson + [insert name] is just about enough to overcome the other team, even if the other 3-4 bench guys don't do a whole lot. But on this night, it was everybody who played their role well and as a result, there were no weak links.

- Reggie Jackson was amped up for most of the night, and it did hurt his shooting a bit. Maybe he was excited to go against Rondo, I don't know. Even though his shot wasn't falling though, I liked his aggression in understanding where he needed to go on the court to make things happen.

- Jackson pulled off that little high screen play with Serge Ibaka a few times thatÂ we had highlighted between Durant and Ibaka. It's a money play and Ibaka looks confident taking that shot.

- Jeremy Lamb got off to a quick start, and even though it seemed like he petered out with 19 points, you could tell that he was opening up his game a little bit. He was looking to make plays at all times instead of just waiting for a pass to come to him. His best attribute on the night was how he is finally looking to attack the rim instead of settling for jumpers. He finishes really well because he can leap and has freaky long arms, but mostly because Lamb has really good body control. In fact, you can see it any time Lamb goes up for a rebound and has to adjust in the air.

- The play set that really helped OKC push ahead in the 3rd quarter had an interesting point of attack. Instead of it being Jackson and/or Derek Fisher, the offense was read by Lamb and Nick Collison. Nick spent a lot of time with the ball in his hands at the top of the key, looking for cutters, setting screens, and only as a last resort, taking jumpers. In fact, Collison shot only 3-7 on the night but finished with 4 assists. He and Lamb are building tremendous chemistry.

- Perry Jones. In the Kevin Durant role, he finished with 10 points, 4 rebounds, 2 assists, and 3 steals. Yeah, it's about 30 points fewer than we're accustomed, but PJIII wasn't a liability, he was an asset.

- Rondo. Good to have you back, buddy. Although I fear we're not going to be seeing vintage Rondo until next season.

- Kelly Olynyk. All of the summer league debate comparing him to Steven Adams aside, every time I see that guy I think that he belongs in a sci-fi movie as one of the scientist extras who ends up getting eaten by a giant space alien bug.

The Thunder as a team shot 53.8% from the floor, a remarkable number even against a weaker team like the Celtics. What was the key? Did you read this post? You should read that post. It uncovered one of the biggest problems that the Thunder offense was having after Westbrook went down again. To quote Z:

Put bluntly, during the Catastrophe era, the Thunder were taking threes like they were one of the best shooting teams in the league, but they were making them as if they were one of the worst shooting teams in the league. This was a huge problem for the team when they got behind, because they'd just take more and more threes in an attempt to catch up. The team never managed to get hot, and the sheer amount of heat checks that were going on dug a rather large hole.

On this night, OKC attempted 13 of them, making 5. Not a great percentage obviously, but it's the attempt total that stands out. The Thunder, playing without Durant or Westbrook, never resorted to settling for 3-pointers to try and make the offense work. Instead, the Thunder relied on motion. Constant, fluid motion. Whether the point position was being run by Jackson, Lamb, or even Collison, the offense never stopped looking for paths into open space for shots. Here is their shot distribution. 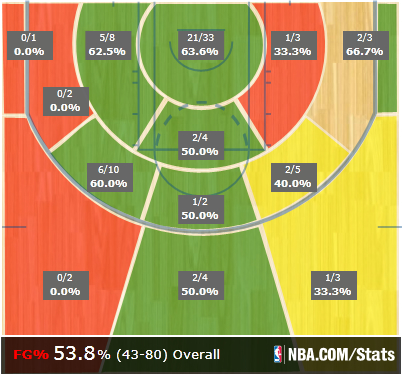 The Thunder have had quite Â a run over this past week, and in a way, this win is really icing on the cake. One of the ways that we've long differentiated between teams like the Heat, Spurs, and Thunder is that each season it seems like Miami and San Antonio go through a few games where they're missing key players yet don't miss a beat (sometimes even against each other!), yet the Thunder haven't been able to do that. Of course the big reason why is that they've never been without their All-Star duo, so this was the first opportunity to see what would happen. Lo and behold, the Thunder mimicked those other guys pretty well.

It's a quick turnaround, but now the Thunder have to head down Route 95 to Philly and face Michael Carter-Williams and the 76ers. If Durant has to sit again it will be a challenge, but at least we now know that the rest of the crew can go in with confidence and handle business as necessary.