Beyond the Thunder Arc: Kevin Durant transforms into Slim Reaper, Thabeet wears a onesie, Kobe is sad, and more!

Who in the NBA deserves acknowledgement for basketball and otherwise this week? You have to check inside to find out!

Share All sharing options for: Beyond the Thunder Arc: Kevin Durant transforms into Slim Reaper, Thabeet wears a onesie, Kobe is sad, and more!

Man...what a difference a week makes. I was pretty down about this squad last week. It is amazing the healing power that Kevin Durant has on your outlook. He is the human version of Robitussin. His insane play has even spawned a new nickname (more on that later) and everyone in the world has taken notice. So let's quit wasting time and get right to it shall we?

I mean this is just so cute.

If only they were both from the same country then we could see some amazing synchronized swimming at the Olympics.

Seriously...what in the hell is he wearing? I hope to God that thing is a cammo onesie because that would make me love Thabeet even more.

Everyone once in a while when he isn't too busy elbowing Steven Adams in the face, Vince Carter does something to remind you that he is still alive and playing in the NBA. This time he did it by reminding Raptor fans why they still boo him.

Two things that never get old are Vince Carter getting booed in Toronto and Jazz fans still booing Derek Fisher.

I mean, he did this to LeBron James. You will have to watch it a few times to make sure it isn't fake.

One question. Why in the hell did Gerald Henderson jump? I am going to go out on a limb and say that was a very bad decision.

Poor Bargs. This is really the epitome of the Knicks season on 49 seconds.

I imagine the first thing he thought once he left his feet was milk was a bad choice.

This such a great Kobe reaction to watching the defense (or lack thereof) vs. LeBron James in the fourth quarter of yet another Lakers loss.

I feel like Kobe just wants to yell this at the top of his lungs: And now time to shift all of my focus to how amazing Kevin Durant has been over the past week.

For my money, I will still go with the nickname "Durantula" because I have been saying it for so long. I will say that Slim Reaper is pretty cleaver though and kind of freaking scary. At least it is based off of this depiction. 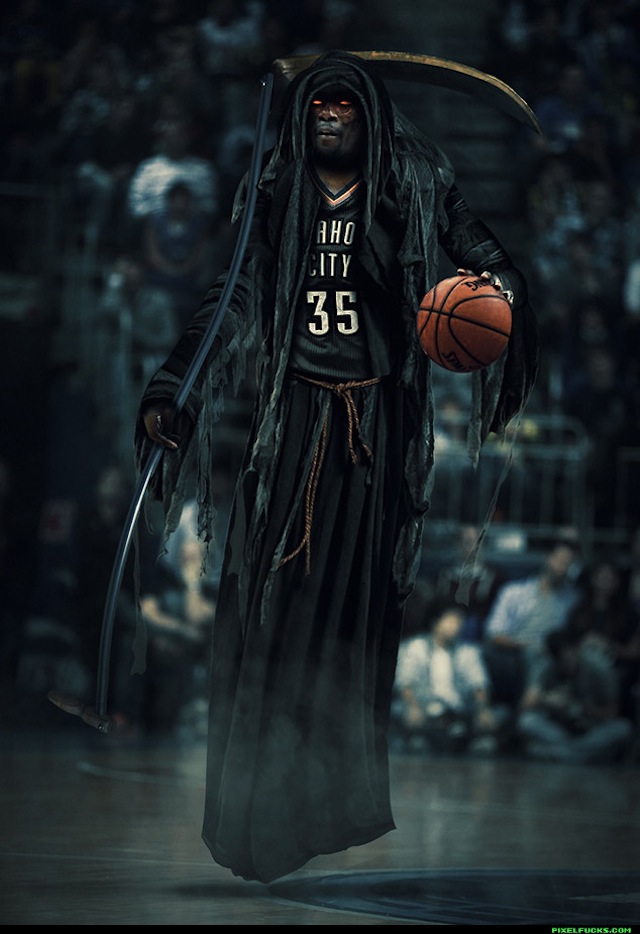 I will be using that image to scare my daughter into cleaning up her room and eating her veggies for the next 15 years. I do love that KD doesn't like the new nickname because of course he doesn't like it. He probably thinks it is too mean or evil sounding.

First Slim Reaper did this to the Rockets"

Then just in case anyone in America missed it the first time, KD made sure everyone got a second look at Dwight Howard wanting no part of him.

I could watch this all day. In fact I spent much of my day watching it.

We found out that the Slim Reaper is not a fan of technical fouls. After picking up a 'T' vs. the Blazers with 3:45 left in the game, KD went 4-4 and scored 11 points. Here is visual proof in case you don't believe more some reason.

Duh-doy! Of course it is the Slim Reaper. No way I was going to Britta this and give it to someone else. In his last five games Durant has posted 40.4 points, 5.4 rebounds, and 6.2 assists, and shooting almost 60% from the field. Those numbers are mind numbing to think about. Durant is in video game mode and using cheat codes. This could not have come at a better time for the Thunder who were struggling in the absence of Russell Westbrook.

The question surrounding the Slim Reaper now is can he possibly keep up this ridiculous rate? I put the odds at 70% that he can continue to play close to this level until Westbrook gets back. For as much was made about the number of shots KD was taking, he is still a very efficient scorer. With his length he is able to hit jumpers from all angles. Plus, when he drives, he gets to the basket and scores or gets to the free throw line averaging 12 free throw attempts during this five game winning streak. Much was made and been written about Durant being sick of finishing second and not being nice anymore and rightfully so. At this moment Durant doesn't have to worry about finishing second to anyone because as of now he is the MVP of the NBA.

What a difference a week and a five game winning streak make! It isn't just the five game winning streak that has been impressive for the Thunder. It is who the wins were over and the situations surrounding the wins. First win to start the streak was the comeback win vs. the Rockets of the road. The Thunder were able to come back after giving up 73 points in the first half and the Rockets were hitting every thing they threw up. Cold shooting added with good defense and KD being amazing helped the Thunder capture the comeback win in Houston. Next was beating a Warriors team at home on the second night of a back-to-back. This is a Warriors team that the Thunder have struggled with this season and presents the most difficult match up in the Western Conference. Next was the win vs. the Kings which is a TCB win. Then came the Blazers. A team that had beaten the Thunder twice this season (once in OKC) and had a lead in the 4th quarter. The Thunder's ability to utterly dominate the last 3 minutes of that game was eye opening. Mainly because they were that dominate sans Westbrook. The Thunder followed that win with their third consecutive win over the Spurs the next night. For those scoring at home, that is four wins over four teams that are all playoff teams with two of them coming on back-to-backs.

Right now the Thunder are the most dominating team in the NBA, yet this is not the best they have played this season. That stretch before Westbrook got injured, when they won 20-23, is still them at their best. With Kevin Durant doing his best to lock up the MVP, Reggie Jackson being able to find his groove on offense, and the strong bench production the Thunder are the top team in the Western Conference and in my mind it isn't even close. They have the least amount of issues compared to the other teams and the biggest advantage they have over the other West teams is they have an identity.