Is Durant the reason for the Thunder's recent success? Yes. Is Durant doing it while taking less shots than usual? Also yes.

Share All sharing options for: The Three Great Post-Westbrook Eras

The Thunder without Westbrook can be separated into three eras....

THE ERA OF PURGATORY

When: Boxing Day to January 5th

Description: This era was one of uncertainty. The unit appeared to be defensively solvent, but their offense seemed to fail them at the most inopportune times. Nobody really knew what to make of the team, and they gave some mixed results. This team pretty clearly knew how to win, but they didn't really display the talent needed to carry them through the bad times.

THE ERA OF CATASTROPHE

Description: Then, all of a sudden, the walls caved in. During this era, the Thunder were absolute garbage. They only managed to barely overcome a extremely woeful Bucks team, they lost to a spiraling Grizzlies team, and they were crushed by the Jazz and Nuggets. How bad was this era? Well, they had no defensive identity, doing a terrible job of closing out on shooters or forcing any kind of pressure. Offensively, they couldn't manage to put anything together that didn't involve Kevin Durant. By the end of it, there were those left wondering how good the Thunder were in the first place.

THE ERA OF DURANT

Description: And then, the sun shined through. Kevin Durant started posting All-Star like numbers, and the Thunder rode his heroic charge through the fourth quarter of every contest. Suddenly, the Thunder were defensively questionable and offensively brilliant, outscoring all of their opponents in the process.

What separates these eras?

Put bluntly, during the Catastrophe era, the Thunder were taking threes like they were one of the best shooting teams in the league, but they were making them as if they were one of the worst shooting teams in the league. This was a huge problem for the team when they got behind, because they'd just take more and more threes in an attempt to catch up. The team never managed to get hot, and the sheer amount of heat checks that were going on dug a rather large hole.
-

And now, we know how that hole was dug. The team simply wasn't moving the ball enough during the era of catastrophe, lazily throwing the ball out to three point shooters and doing little to stem the offense at the rim. Interestingly, the issue isn't one of possession. The Thunder will turn the ball over a lot regardless of what they do, but their great rebounding ratio usually manages to make up for it. Furthermore, the Thunder's Pace (or possessions per game) was remarkably consistent across all three eras. 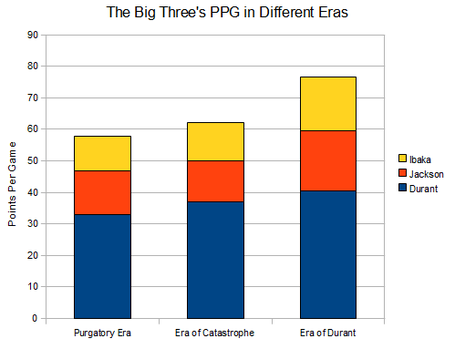 At this point, one question remains. Why did the team perform so much better during the era of Durant, while stumbling to ho-hum losses in the Purgatory Era? Most people like to pin the success on Durant. As the chart above indicates, he did see his PPG gradually increase over time. But you can also see that Serge Ibaka and Reggie Jackson counted for about half of the Big Three's 20 PPG increase between the Purgatory Era and the Era of Durant. So really, it's a combination of all three player's efforts that has helped the team to success. 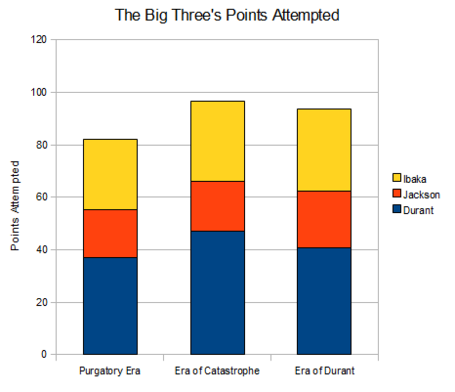 Basically, a player's "points attempted" category resembles the amount of points each player would score on average if they hit every single shot they took.* At first, it seems to indicate that Ibaka is an inefficient player, as he is capable of averaging more than Reggie Jackson but ends up scoring far less. In actuality, it moreso represents Ibaka's lack of ability to shoot threes or get to the line, both of which are much more efficient ways of scoring when they can be executed correctly.

Getting down to brass tacks, the most amazing thing about this graph is the fact that Durant's points attempted were highest during the era of catastrophe. This tells us that Durant's efficiency has skyrocketed over the past five games. He's literally taking significantly less shots than he was previously and still managing to break scoring records.

The second most amazing thing about this graph is that it tells us that Jackson and Ibaka's increase in points per game has come as a result of increased usage. It's hard to tell on the graph, but Jackson saw a jump of 3.3 points attempted between the first era and the last, and Ibaka saw a jump of 4.6 points attempted over the same span of time. Neither has been necessarily more efficient, but they play at a high level anyway.

Purgatory is our reality. In this post-Westbrook world, shooting for the Purgatory Era is a realistic goal to have. Simply put, the only reason the Thunder have played better during the Durant Era is....Kevin Durant. His scoring ability has been off the charts, and he pretty much carried the team to victory in four of the five games. But again, it's not because the Thunder have used him more. It's simply because he's playing at a level that's higher than we're used to. (If that's even possible.)

The key to success is avoiding catastrophe. That means continuing to follow the gameplan and run the offense, no matter what. Don't let KD take over handling the ball while Reggie Jackson is on the court. Don't settle for pull-up threes. Make an effort to get to the rim on every other play. Get the team in an offensive set before the point guard is across from the half-court line, rather than calling for a quick pick. The list goes on.

Jeremy Lamb is the X-Factor. Lamb is only averaging 40.3% from the field and 29.5% from three since Westbrook was injured. Furthermore, he's been remarkably inconsistent across all of the eras, mostly thriving in games where the outcome was never in doubt. Lamb's problems are obvious to most. He has trouble consistently hitting open shots, he doesn't have a sense of what a good shot is, he has no ability to ISO, and he's not clever enough to draw consistent contact near the rim. All of this can be fixed with time, so I'm not too worried about what his struggles might mean. But for now, we're all forced to ride the waves of Jeremy Lamb's youth. Let's just hope that the big one comes at the right time.

What do you think about the Thunder's recent eras? Will the Durant era continue, or are we in for a catastrophe? Let us know in the comments!