The Thunder played consistent basketball from beginning to end and won their 3rd consecutive game over the Spurs this season.

Share All sharing options for: Recap: Oklahoma City Thunder win 3rd in a row over Spurs, 111-105

The Oklahoma City Thunder defeated the San Antonio Spurs, 111-105. The game was a close affair much like the Thunder's win over Portland the previous night. However, different this time out is that the Thunder seem to have a definite plan on what to do with the Spurs, even while missing Russell Westbrook. They know how to apply the right kind of defensive pressure and take away some of what the Spurs like to do, and the end result was a game where OKC seemed to be playing in front, even when they were behind, for most of the night.

The Thunder were led by Kevin Durant, who finally saw his production fall back to earth. He only managed 36 points on 12-22 shooting. Tragic, I know. His points were offset a bit though by a career-high 11 turnovers, 8 of which were in the first half. Fortunately, he was bolstered by Reggie Jackson, who is now a bona fide Spurs assassin. He finished with 27 points on the night on 12-17 shooting, which included 3-3 from 3-point range and 8 assists.

The Spurs were led by Tony Parker, who finished with a game-high 37 points. However, even though his teammates were productive offensively (the team shot 53.3% overall), none of them acted as threats which OKC had to intentionally counter. It is also worth noting that Kawhi Leonard, the Spurs' top defensive player and a guy whom I'd argue defends Durant better than anyone, had to leave the game with a broken finger. As a result, the Thunder were able to withstand the Spurs' strong offensive performance and come out with the win.

Three things that are currently trending, so let's take each one by one.

Durant did not end with the same level of domination that we saw against the Blazers or Warriors, but in a way, this is the kind of game that defines superstars. I remember a lot of Michael Jordan games that had the same vibe. It is the kind of game where the player doesn't have everything working for him. Shots aren't falling as easily, the opposing defense is figuring some things out, and in the case of this game, Durant was forced into 11 turnovers.

Durant responded by continuing what I like to call "the grind." The grind is a state of mind that great players can get into that continues to press their position by maximizing their advantages and minimizing their weaknesses for that game. For example, when Durant's shot isn't falling, he does well to produce at the FT line. In this game, Durant continued the grind by setting up his teammates. On the night, his team finished shooting 54.2% from the floor and 10-18 from 3-point range. Jackson and Derek Fisher combined to shoot 6-7 from long range. Jeremy Lamb struggled a bit, making only 4-11, but he handed out 6 assists and hit a massive contested step-back jumper in the 4th that kept OKC's offense moving forward.

Finally, when the chips were down, Durant did once again what he did to the Trail Blazers. He sunk two 3-point daggers into the Spurs and that was all she wrote.

So now we have a new nickname for Durant that is trending, the Slim Reaper. I'm not sure who originally coined it, but it is 1000 times better than that silly "Durantula" name and actually fits Durant's on-court persona. Jalen Rose christened it as well.

From KD to Durantula. Iceberg Slim to the Slim Reaper! #NBA #OKCvSAS

I'll be honest. I am not really sure why Jackson plays like an All-Star against the Spurs but is so inconsistent against everyone else. I am guessing that Jackson, who alternates between carrying a ton of swag and looking like his older brothers have been yelling at him all day, had found and established a lot of confidence earlier this season and it carried over to this game. He didn't quite match Parker's 37 point production, but he came pretty close with 27 points of his own, and actually played the PG position better, finishing with higher assists (8-4) and fewer turnovers (3-0).

I would also contend that the Spurs look like they have a real problem with attacking style point guards. Parker is never going to be mistaken for a defensive player, and the Spurs often have to hide him on defense. However, having to go against a full bore player like Russell Westbrook, or a more slip and slide player like Jackson, gives them a lot of trouble.

It always gives Jackson confidence when he can get to the rim, and even though he didn't finish at a great percentage there, you can see in his shot chart how it gave him confidence taking other shots: 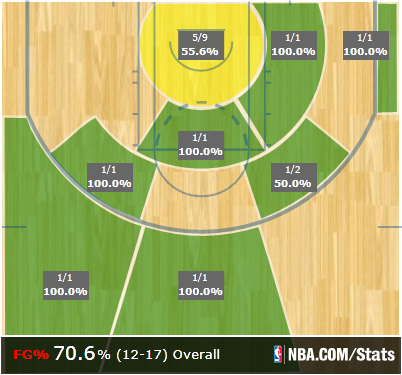 As we wrote before, the Spurs have a serious problem when it comes to defending scoring guards, and Jackson proved that it doesn't even matter if OKC has one or two of them on the court at the end of games.

As I was rewatching the final moments of the game, something jumped out at me as Kevin Durant lined up the first of his 2 crunch time 3-pointers. Take a look at this screen shot. 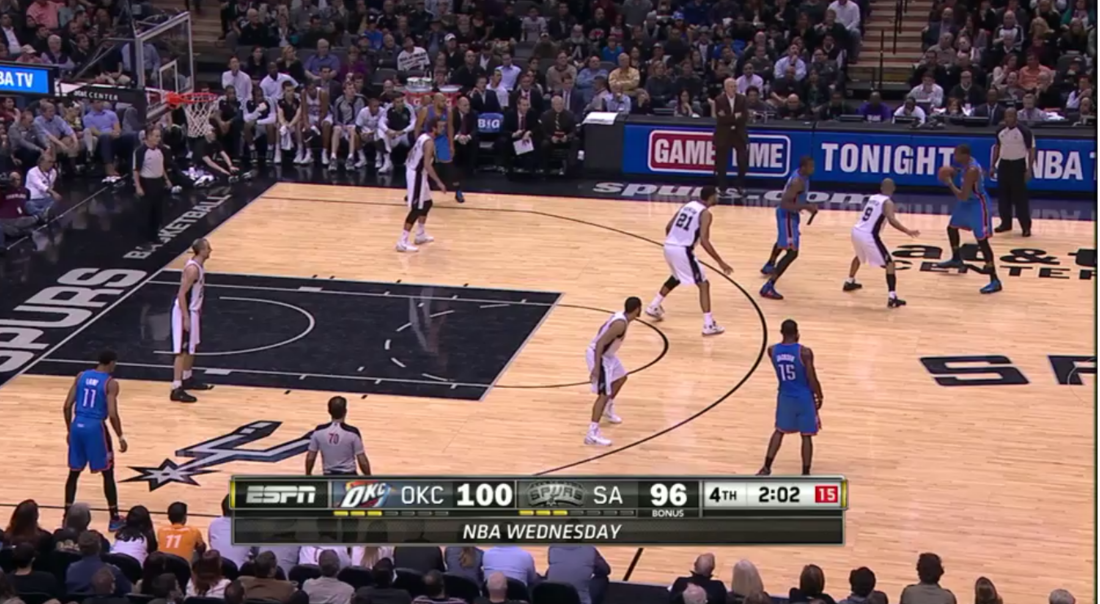 What should strike you is not only what you do see, but what you don't see. The Thunder were in a 2 possession game with 2 minutes left to play, a situation calling for defensive stops if there ever was one, and 2 Thunder defensive specialists were not on the court.

Instead, take a look at what we have: Durant, Ibaka, Jackson, Lamb, and Fisher. All five of these players are competent 3-point shooters. With Kendrick Perkins and Thabo Sefolosha on the bench, the Spurs have nobody that they can lay off of in order to corral Durant (you could argue that Thabo is a competent shooter as well, but he isn't nearly as likely to let it fly as the 5 guys on the court). They have to stay out on the perimeter and hope that Durant doesn't try to take the ball to the rim. He doesn't; instead he pulls up and drains the 3-pointer, but the personnel is striking, given Brooks' penchant to almost always go defense in situations like this.

This is very similar to the Heat's "5-out" play set. Surround LeBron James with shooters and allow him to either drive to the rim or create spacing to free up one of them. Durant can act in the same way. He could have easily attacked the rim, and any player who opted to help off would have had to leave a shooter wide open. Durant has proven that he can find and hit the open shooter. Even if Durant decided to drive and finish, he would have also had Ibaka rolling to the rim for either a pocket pass or for good offensive rebounding position.

This is a deadly personnel set, and I hope we see more of it.

The Thunder have effectively won the regular season series against the Spurs, winning their 3rd game in a row. They do play again on April 3rd, and that will be an interesting match-up because if the Spurs are locked into their playoff spot, I could easily see them resting their starters and foregoing the game. Pop might even cede it to give the Thunder an inflated sense of self-confidence.

From a substantive standpoint however, this win is fulfilling but has to include the caveat that for the 2nd consecutive game, the Spurs did not have a healthy Kawhi Leonard for the duration (he missed the 2nd game following a dental procedure). How much of a difference would he make if he were available, and would it be potentially offset by a healthy Westbrook? We may not find out until the playoffs.

At the end of the day however, this is a huge win for OKC because they have just run the gauntlet in the West, playing 4 teams that are competing for a top 4 seeding (Spurs, Trail Blazers, Warriors, Rockets) and defeated them all in confident fashion without their All-Star PG. After the consecutive losses to the Jazz and Nuggets, I don't think anyone saw this coming. Yet here we are, with Kevin Durant playing his best basketball of his life, and in a way that enhances his team's overall performance instead of making it a zero sum game.

The only real test left in this regular season?

Bring on the Heat.