Durant continues his otherworldly offensive explosion and the Thunder defense showed up big time in the 2nd half once again.

Share All sharing options for: Recap: Oklahoma City Thunder finally figure out how to close out Portland Trail Blazers, win 105-97

The Oklahoma City Thunder defeated the Portland Trail Blazers, 105-97. In a back and forth game that lived up to its billing despite the fact that Portland was on the 2nd of a back-to-back and OKC was without Russell Westbrook, the game went down to the wire, just like the first two games. The big difference tonight however was that when the 4th quarter wound to a close, the Thunder offense did not. Instead, OKC outscored Portland 15-2 over the final 3:45 of regulation to close it out.

This game, despite the aforementioned caveats, was one worthy of consideration because despite being a mid-January game, there were some meaningful aspects that will carry forward. OKC had dropped the last two to Portland and were facing a season series loss with another one tonight. On top of that, the Thunder were starting to play as if Portland was getting into their heads a bit, and another loss would have made it difficult for the Thunder to regain a mental edge as the playoffs approached. Instead, OKC reversed things in the final minutes of play and we were treated to another dominant final stretch of the game by Kevin Durant and his team.

Speaking of the man, Durant finished with a game-high 46 points on 17-25 shooting, including 6-7 from 3-point range. I am running out of adjectives and superlatives at this point. All I can say is that I've never seen Durant play at this kind of peak performance for this kind of duration. The rest of the Thunder struggled on offense, but it was their defense that came through in the end, holding the Blazers to only 1 made FG over the final 6 minutes of the game.

Portland was led by LaMarcus Aldridge, who finished with a team-high 29 points but on only 12-26 shooting, and missed a number of jumpers down the stretch. 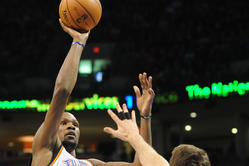 You want to watch this, right? Of course you do.

Kendrick Perkins and Kevin Durant combined for 50 points on the night. No, seriously. Actually, it's not that hard to believe, given the tear that Durant has been on, and Perk getting 4 points sounds about right. However, would you believe that the two combined for a 1-2 punch in the final two minutes of action that all but sealed it?

Play 1: Perk hits a YOLO baseline 20 foot jumper. I mean, I don't even know what he's doing over there, but it had Durant laughing maniacally all the way down the court in the aftermath.

These two plays, sandwiched around some clutch defense on the other end, sealed a game for the Thunder that looked dangerously close to slipping away again. Twice OKC had 2nd half leads over the Blazers this season and twice their offense fell apart, missing big shots in big moments. In fact, this is what I wrote after loss #1:

This is the way it goes - sometimes the other team hits a shot and your team doesn't. In the final 1:30 of the game, all-world scorer Kevin Durant had two clean looks from beyond the 3-point arc and he missed them both. On the other end of the court, Nicolas Batum, the guy who was matched up against Durant for most of the night, got his 3-pointer to fall. These sequences represented the last potential turning point for the Thunder.

What games like this come down to, with a playoff level pulse beating underneath the surface, is which team can get a few stops and put together some kind of offense. Previously the Blazers got it done and OKC did not. Tonight, it was the other way around.

For better or worse, what these great endings do though is obfuscate how important the previous 3 quarters were, and we don't want to gloss over that. The Thunder, for the 2nd time in a row vs Portland, were without Russell Westbrook and had to rely on both Jackson as the starting PG and a shortened bench. In the first quarter and for part of the 4th, it looked like Portland would once again play a little bit better, earn the win, and continue to live in the Thunder's heads. That was going to be my lede had OKC lost - they were playing like the Blazers had a mental edge. The Thunder were doing uncharacteristic things like missing free throws and losing track of defensive rebounds and it was going to cost them. What I thought at that moment is that this is what playoff games are all about - when a team is missing its 'A' game, it still has to figure out a way to compete.

I think this is what I enjoyed about the game the most. Portland was playing really good offensive basketball and the Thunder weren't quite measuring up to it. Yet they continued to grind through plays, grab offensive rebounds (15 total), and for a nice change actually protected the basketball (only 7 TO's). Despite not shooting the lights out, the Thunder were actually doing a lot of things right, and it enabled them to stay in a game that could have gotten away from them. Furthermore, because they were staying competitive, Durant didn't have to log insane minutes (38 on the night) to get his points. Actually, now that I think about it, Durant produced on average 1.2 points every single minute of the game. I...I...just don't even know.

The only thing that would have really topped things off is if we got a shot of Westbrook celebrating Perkins' jumper. Oh wait.

Snarling, raw meat chewing Russ is what I like to see on the court, but happy, jubilant, celebrating Russ is a breath of fresh air on the sidelines. I love how much he enjoys cheering his team on.

Entering the 4th quarter, the Thunder's 2nd and 3rd leading scorers had a combined 21 points but were shooting 9-29 from the floor. Would they step up? Would the Blazers continue to shoot over 50% from the floor? Would Durant figure out how to produce offense after struggling in the previous 4th quarter of a Blazers loss?

The grind as mentioned above is always rooted in sound defense. Sometimes the other team makes shots. This is basketball. That does happen. However, it doesn't change the fact that a team still has to adhere to sound defensive principles. As long as the team doesn't falter, eventually the percentages will regress to the mean. In the 4th, Portland's finally regressed to the mean and the defensive work that Serge Ibaka (5 blocks), Thabo Sefolosha, and Reggie Jackson did helped limit the Blazers to a poor shooting effort.

Portland went cold in the end, and while we have to caveat it with the fact they were playing the 2nd of a back-to-back (they lost last night to the Rockets), OKC's defensive body blows eventually caught up with Portland. They made only 1 meaningful field goal in the final 6:30 while the Thunder closed it out on a 20-6 run. Their defense set the stage for Durant to sink three 3-pointers in the final 3 minutes of play, raising his point total to ridiculous heights (he is now averaging 41 PPG in his last 5 games). In fact, after picking up a technical foul after he committed a charge, Durant finished up going 4-4 for 11 points. With the defense blocking key shots and Perkins grabbing a critical steal with 46 seconds to go, Portland's hope was snuffed out.

The Blazers are a good 3-point shooting team, but it was the Thunder's outstanding shooting from beyond the arc that helped propel them to a win. The Thunder finished shooting 10-15 from long range, with Durant going an absurd 6-7 from outside the arc.

3-point shooting is all about putting the right shooters in the right spots as many times as a team can throughout the game. For teams like the Rockets and Warriors, this is a key ingredient to their success. For the Thunder, they often struggle to do this, so getting this kind of production is an anomaly. However, they still need to continue to work in this area, and sometimes the best 3-point shot is simply Durant at the top of the key walking into it. If there are no other good 3-point looks available, OKC would do well to simply not take them and work to produce points in other ways, which is what they did against the Rockets last week.

The Thunder still trail the Blazers in the regular season, 2-1 with their final matchup coming in a few weeks, but before the expected return of Westbrook. What I hope this game (and really their last game too) shows the Thunder is that they can compete with the Blazers even without Westbrook. They can do it when they play committed purposeful defense that relies on the Thunder's 2 main attributes - protecting the rim, and pursuing on the perimeter.

Meanwhile, OKC has a fast turnaround, because tomorrow night they head to San Antonio to face the West-leading Spurs. The Spurs will be no doubt looking to exact a measure of revenge of their own, as OKC has owned them so far this season. Even so, the same principles will carry forth - if the Thunder can maintain their defensive principles and give Durant a shot to win in the end, that is proving to be a winning formula. Practically Jordan-esque.

I'll leave the final word to my buddy Ethan Strauss:

That's it. I'm buying a hookah.