We take a look at a play designed for Durant and Westbrook, as well as looking at whether it can consistently work with Reggie Jackson.

I recently found a YouTube Channel by the name of "How U". This channel, run by a person only referred to as J, puts together plays that he finds run by various NBA teams. J has put together several play compilations featuring the work of the Oklahoma City Thunder, so it only makes sense for me to break down the plays that he's identified. If you've got some spare time, make sure to give J a quick follow on Twitter and check out the rest of his play library.

Today, we'll be taking a look at a simple play designed to give Kevin Durant an isolation situation against his defender. This play is almost exclusively used with Durant as the centerpiece, while a point guard generally acts as the flare option. The two bigs in the play are pretty much interchangeable, and one of them can be a wing if the Thunder are going small. The player standing in the corner is always a shooting guard or small forward, and for this play to work it is absolutely essential that the other team sees him as a shooting threat.

I've diagrammed the plays below, so we can look at and analyze each step. For convenience's sake, I used the team's 5 traditional starters in their most common roles. 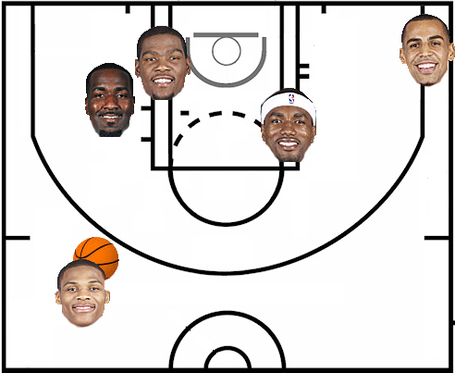 This play starts out with Westbrook handling the ball on the left wing, Durant and Perkins hanging out near the left block, Ibaka on the right elbow, and Sefolosha in the right corner. 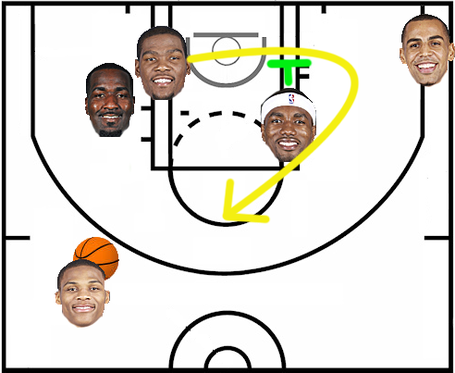 Look back: The evolution of Durant's pin-down play 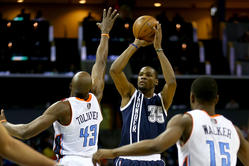 The play starts when Kevin Durant runs across the lane and performs a zipper cut towards the top of the key, receiving a screen from Ibaka along the way. Perkins may or may not set a screen as well, depending on where Durant starts his cut. This motion is the easiest way to tell whether the Thunder are running the play in-game, as Durant usually encounters heavy resistance while performing this cut. 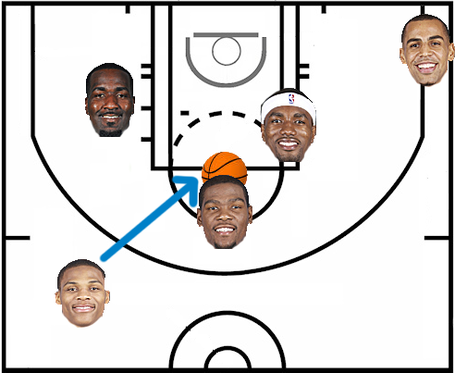 The setup of the play is complete when Westbrook hands Durant the ball at the top of the key. Durant will generally gravitate towards the free throw line, but can be anywhere from the high paint to out near the half-court line. From here, Durant has three choices: Shoot, drive, or pass. 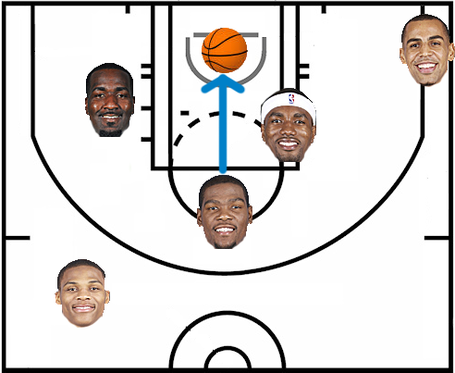 Ideally, this is what the play sets up. Ibaka successfully slows down KDs defender just enough to give KD some daylight, and he drops in one of his silky smooth jumpers. 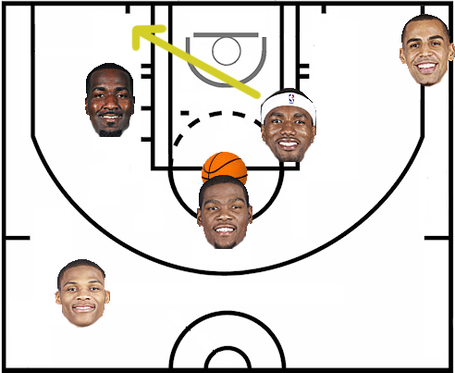 If the shot isn't there and KD has a favorable matchup, he may simply be given the option of driving the ball. Usually Ibaka will drop down to the left corner. This kills two birds with one stone, as it gives KD room to work on the right side as well as putting Ibaka in position for the offensive rebound. 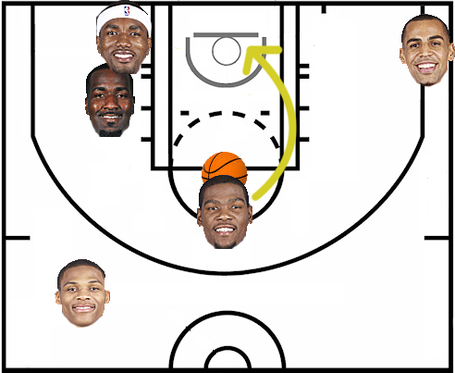 When KD drives the ball in this scenario, he's generally going to be shooting a 3 to 8 foot floater, utilizing his length to get around his defender and make it as good of an attempt as possible. If KD were to successfully draw Sefolosha's defender in this situation, he could make an easy kick-out pass for an open corner three. 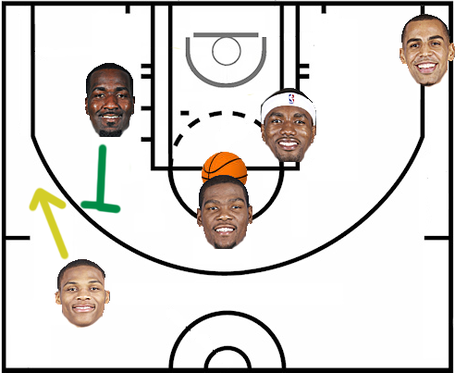 Should Durant get double-teamed or otherwise run out of options, this play always has an alternative. In this case, Russell Westbrook runs from the top of the arc to the corner of the left wing, without the ball. Perk sets a screen for him. The great thing about this play is that Westbrook's defender is usually caught by surprise, as they're probably watching the ball. 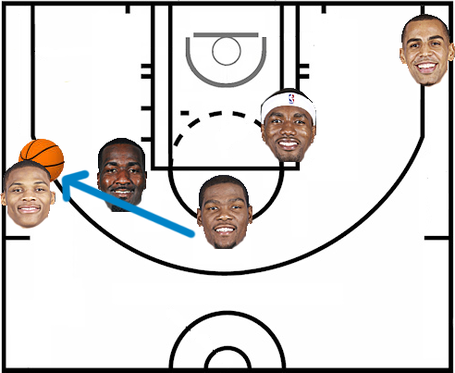 Next, Westbrook gets the ball. Durant will always make this pass in front of Perk, as a pass behind Perk would land in the hands of the enemy. 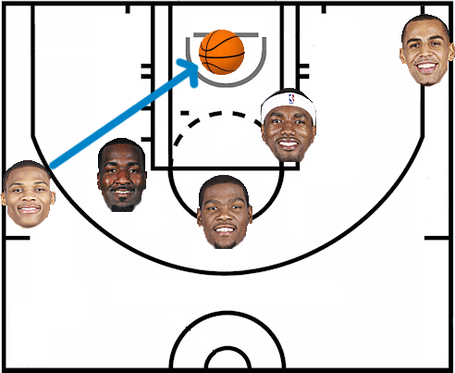 From here, Westbrook has two options. He's generally gotten space after this play is run, so his first option is to shoot. KD's pass isn't a difficult one to make, so this shot is almost guaranteed to be in rhythm and on target. 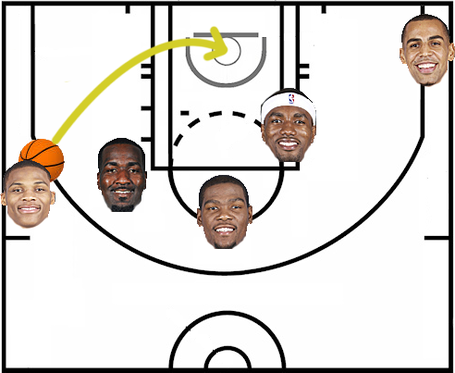 Westbrook's other option is to use his speed to outrun his defender to the basket. He usually takes this option if the opposing team elected to switch on the screen, pitting Perk's likely much slower defender against Westbrook. Westbrook doesn't have an out if he can't get a good shot, but might run across the lane and look for an open man. 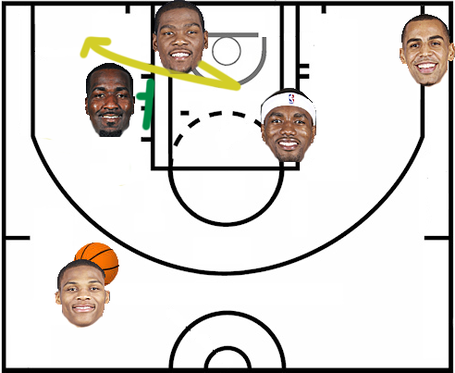 This alternate play was only shown once at the end of the video, but I like its' style, so why not give it some credit here? Kevin Durant can initiate the play by changing his intent during the initial cut, doubling back and using Perkins as a screen rather than Ibaka. 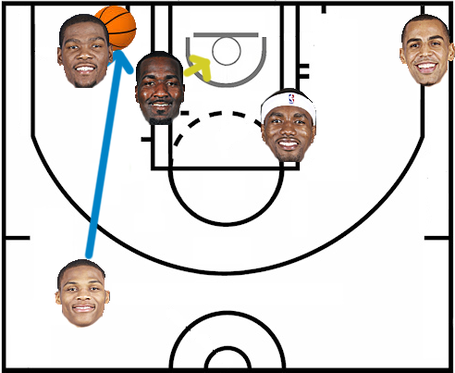 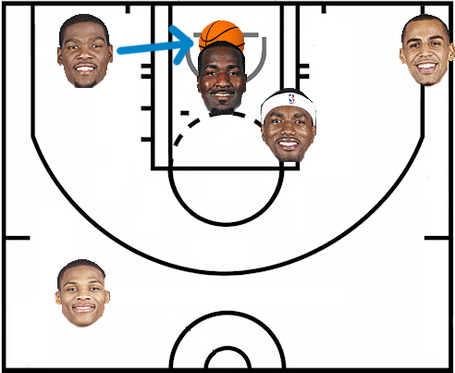 From there, it's just a simple pass to a big man who has great post position.

For this play to work with Reggie Jackson, he needs to be a consistent threat from three. Obviously, this play was designed to revolve around two superstars, but with Westbrook out until after the All-Star Break, it now only revolves around one. I've seen the Thunder run the play with Jackson before and get some great three point attempts out of the flare option, but Reggie absolutely has to nail those attempts. If he starts clanking, the play becomes useless. The defense will sag off of him and play for the drive, potentially forcing Reggie into a bad attempt. His three has been up and down, but I'm confident that he'll get team's to respect his shot eventually.

Derek Fisher is a decent PG option for this play, but not perfect. Basically, once you run the flare screen for Fisher, he's got to shoot it. Since the shot is guaranteed to be an easy, in-rhythm pass, he doesn't need much room to acquire a good attempt. On the other hand, he's absolutely no threat to drive the ball and he's averaging 26% from three on the year.

The key to this play is the man in the corner. As long as the defense respects his shot, the play can work. If the defense doesn't respect him and sags off, then he must be able to nail the corner three. But if he can't hit a three and the Thunder don't trust him to make that attempt, the opposing team suddenly finds it very easy to force KD or Westbrook into a bad shot. This might not seem like a big issue, but it definitely hindered the Thunder back in Sefolosha's early days, and it can hinder them whenever Andre Roberson or Perry Jones III is forced to play out on the wing. In fact, Jones faced this exact issue during his fourth quarter stint against the Raptors on December 22nd.

This play thrives on creativity. The play isn't incredibly complex, so it's quick to execute. Also due to its' simplicity, the play is liable to hit a brick wall every once in a while. KD or Westbrook will get stuck in their tracks, and the Thunder will be forced to reset. At that point, KD or Westbrook will either isolate against their defender or run another simple screen, looking for a clean shot. In other words, this is one of those plays that relies upon the talents of Durant and Westbrook above all else.

With few moving parts, it's an offensive staple. There's a lot of room for error on this play, and the way it's run in extremely easy to remember. Very little precise timing is involved, and the ball only has to move one or two times. This makes it a reliable play to use at the end of games, when things are tense. This also makes it a go-to play if you're experiencing bad turnover problems.

What do you think of this play? Do you have any suggestions for improvement? Let us know in the comments!