Wow. I hope you didn't miss that one.

The Oklahoma City Thunder completed the 2nd of back-to-back games by defeating the Golden State Warriors in OKC, 127-121. Then the game ended and everybody went home.

Realistically, if you watched this game (and I really hope you watched this game) there is little if anything that I can write that can adequately explain what we just witnessed on this Saturday night. If this had been Rucker Park, the loud announcer guy would have walked onto the court with about 3 minutes remaining as everybody swarmed #35 and the game would have just ended. There would be no more reason to finish it.

However, since we're the responsible sort here, let us try to capture in some way what will go down as one of the top 3 NBA games this season.

Kevin Durant, Mr. NOT NICE, scored a career-high 54 points on the night to propel his team, still sans Russell Westbrook, to a huge win over the Warriors on a same night when Stephen Curry scored 37 of his own. Furthermore, not only were the point totals high, but it was the way that both guys were able to able to score at an efficient rate that set them apart. Durant scored his 54 on 19-28 shooting including 5-9 from 3-point range, while Curry scored his off of 11-18 shooting, including 6-10 from beyond the arc. I can't remember another time when two elite players each respectively hit near the threshold of their capabilities on the same night in the same game, but these two guys nearly did it. In fact, at one point in the 3rd quarter Steph actually had a slight lead on Durant at 30-29, before KD hit another gear and zoomed right through the 30's and 40's on his way to the 50's.

Putting aside for a moment Durant's historic night (top point total for his team this season, tops for him in his career, and tops for anyone scoring this season), in the great scheme of things, this was an important win for the Thunder. It was important in the sense that OKC had come off an abysmal 2 week stretch of basketball where their offense was practically nonexistent, and they were playing 2 playoff teams on back-to-back nights. After losing to the Grizzlies on Tuesday, this could have easily turned into an 0-3 week. Instead, OKC got 2 huge wins, with the 2nd one punctuated by some of the best pure individual performances you will ever see. The result though is that OKC has regained its footing, has won the season series over the Warriors, and if ever your friend from New Zealand is trying to figure out this game that his countryman is now playing, simply send him the 3 game box set between these two teams.

We had already been treated to 2 classic games between the Warriors and Thunder, both of which ended on buzzer-beaters. In the first, Andre Iguodala was the man who put down the winning bucket, and in the 2nd it was Russell Westbrook who nailed a turnaround corner-3 to deliver OKC with the win. This time out, there were no last second heroics needed because everything that the Thunder needed to put away the Warriors, Durant provided in a breathtaking scoring run in the 4th where he scored 11 points in a row that pushed a 9 point lead up to 17 and all but ended the Warriors' threat. It was a fitting end to punctuate a night where Durant scored at will whenever and wherever he wanted.

This game was one that really separates Durant from anybody else. It was not simply that he got hot from long range like Curry and Klay Thompson can. Rather, it is the fact that Durant got whatever shot he wanted, whenever he wanted it, and when he got those shots, he made most of them. There isn't a player on the planet alive that can replicate what Durant did, and he mostly did it within the confines of a very solid Thunder offense (58% shooting as a team) and rarely had to force a low percentage shot because of offensive stagnation. He also seldom took away shots from his teammates either. He finished with 6 assists, which wasn't too shabby, but it was Durant's willingness to pass, especially against the Warriors' high trapping schemes, that often left his teammates open for good looks. Apart from Durant's eye-popping shooting percentage, the rest of his team produced a very efficient 73 points on 28-53 shooting against one of the better defensive teams in the league.

- Serge Ibaka followed up a huge outing against Houston by nearly replicating it against the Warriors, finishing with 21 points on 8-11 shooting to go along with 8 rebounds. Once again Serge got off to a quick start, but coupled it with some good 4th quarter shooting as well. He was the recipient of Durant's passes whenever Durant got trapped out high, and all Ibaka needed to do was catch, pivot, and shoot. Surprisingly, Ibaka did not register a single block, but he still made a huge difference in challenging a number of attempts.

- Reggie Jackson did not have the same productivity as he did against Houston, but kudos to him for not backing down from the challenge of guarding Curry. Guarding Curry is like nothing else that exists in the NBA, and even though Jackson took some lumps, he kept his head in the game. By the time the 4th quarter rolled around, the Warriors were having to work a lot harder for their open looks.

- Kendrick Perkins had his 2nd consecutive effective game, grabbing 12 boards while scoring 6 points and collecting 2 assists and 2 steals. What was most surprising is that the Warriors had effectively gone small for most of the game, but Perk was able to stay on the court and give the Thunder good defensive rebounding. The reason why the Warriors went small was because...

-Scott Brooks played another intentional fouling gambit, and this time it worked. He intentionally put Warriors center Andrew Bogut on the FT line early, and not only did Bogut not make a shot, he actually airballed his last one. Warriors coach Mark Jackson pulled Bogut shortly thereafter and he was a non-factor for the rest of the game.

- It might not look it, but Jeremy Lamb was as an important offensive cog as anybody not named Durant. He finished with a solid 12 points 5-9 shooting, but it was because he maintained himself as an offensive threat at all times that helped keep the Warriors defense from double-teaming Durant a lot of the time.

- Steven Adams won the Australian rules basketball matchup tonight, but unfortunately his compatriot Bogut was pulled and Adams fouled out in 11 minutes of action. Adams was effective while he was out there with 6 points and 5 rebounds, but he is still picking up too many ticky-tack fouls that limit his time on the court. Even basic things like keeping both hands off the opposing player would do him well in staying on the court.

-127-121 isn't a bad final total, but it could have been even more inflated had the Thunder not missed 9 FT's and the Warriors missed 15 of theirs. One good thing though - at least OKC didn't replicate what happened to the Rockets last night.

- Apropos of nothing, Scott Brooks looks like he should be a political pundit on MSNBC or something with his geeky glasses.

- Lastly, I don't really know what kind of shirt that Westbrook was wearing, but the first time he stood up to cheer, I had to do a double-take because it looked like some sort of weird reverse halter-top that was exposing his man-nipples, and the thing of it is, it wouldn't have even surprised me that much if that's exactly what it was.

For as much as we can rave about The Thunder offense, Durant's amazing night, and a back-and-forth game for the ages, what it still all came down to was how well the Thunder were able to play defense in the 2nd half.

While it certainly was not a replay of holding Houston to 19 2nd half points, and even if you look at the box score you might think me crazy, the Thunder made some good adjustments in the 2nd half that took away a lot of the Warriors' clean looks. Golden State shot 10-16 from 3-point range in the 1st half, but only got 6-11 in the 2nd half. While that is still really, really good and I'd love to have some of that in Thunder colors, it was still better defense because OKC cut the Warriors' percentages. They are a 3-point shooting team that relies on Thompson and Curry taking a lot of them. That's how Golden State stayed in the 1st half despite OKC's offensive momentum. In the 2nd half, the shots were fewer and far between, and that was enough to slow them down just enough for OKC to maintain its lead.

Along with slowing down their 3-point game, the Thunder defense once again did the job. Between Ibaka, Perkins, Adams, Nick Collison, and Durant, check out how well they protected the rim: 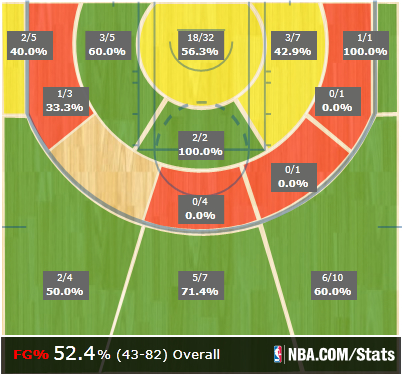 Everyone to a man made a concerted effort to hound the shooters and they trusted that their bigs would protect their backs. It was a replay of the Thunder's success against the Rockets. Even though the Warriors still scored 56 points in the 2nd half, the result was similar and it helped deliver the win.

En lieu of statistics (and there were some many wonderful statistics) just take a look at this picture of Durant's shot distribution. 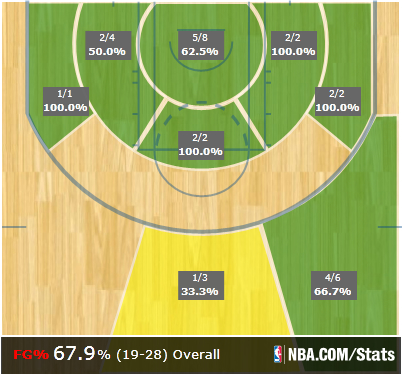 Also, big h/t to our buddies at Golden State of mind, who grabbed these tweets that sum it up so well:

Kevin Durant took 28 shots, his true shooting percentage was 80.1%, and he missed his last three shots.

@ESPNStatsInfo Durant with 54 points on only 68 touches. Only had the ball in his hands for 3:17 all game. Crazy efficient #SportVU

The big takeaway from this game is that the Thunder have finally found some offensive rhythm where none existed even a week ago. They finish this week at 2-1, but even in the loss OKC showed more resolve than they had in the past, and I believe their performance against the Grizzlies set the stage for these two wins.

As filled with hyperbole and adjectives as this game was, I'm not one to say that this game or the Houston game were signature wins for OKC this season. Instead, I would just say that they were two wins where the Thunder played to their potential, and even without Westbrook, proved that they are a force with which to be reckoned. Bring on the Kings.

Now, do yourself a favor and go rewatch this game.

Thunder Blunder: Perry Jones, who somehow failed to score a single bucket on a night when OKC scored 127

Next game: vs Sacramento Kings on Sunday, Jan. 19th at 6PM CST