Who in the NBA deserves acknowledgement for basketball and otherwise this week? Check out inside!

Share All sharing options for: Beyond The Thunder Arc: Durant Smokes Hookah, Perkins Runs a Fast Break, and more

Man...I am not going to lie. This past week kind of sucked for the Thunder. They have only played 3 games since we last left you and they lost two of the three. The only win came against the Bucks which should almost count as half a win. I will try my best to brighten your spirits, but there are no guarantees.

I wish there was a shot of Thabeet ducking his head to fit through the door way, like Gandalf stumbling around in a Hobbit hole.

This is not a bad skill for Steven Adams to have. The ability to get under your opponents enough that they do something like throw an elbow and get ejected is something that comes in handy. The latest victim was Larry Sanders.

Perry Jones helped capture a moment that everyone experiences every Sunday when they are driving around. Noooo!

By the way, I am becoming more and more impressed with PJ3's instagram game. He is giving Thabeet a nice run for his money.

I Got Hacked Award - Kevin Durant

I love that a months old picture of Kevin Durant smoking a hookah getting reposted  is the equivalent of him drowning a puppy. I find that amusing. 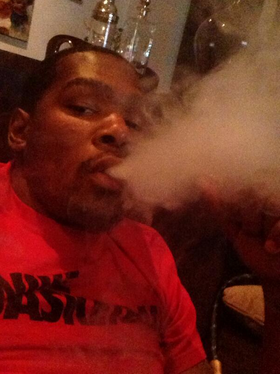 I really wish Durant would have been wearing a sweet Gandalf the wizard type hat in the picture. That would have made my month. Speaking of KD...

This was a night I know Faried wants to forget. Because this also happened to him.

So, a quick recap. First Durant put Faried on ice skates then Reggie Jackson put him on a poster.

Speaking of dunks, it was a very good week in the NBA for that. Lets rapid fire through some of the best.

As soon as Bron made that first dribble between his legs you knew something awesome was about to happen. RIP Bargnani.

Gerald Green can still jump out of the gym. It is a lot of fun to watch him on the break.

Back up center dunk - J.J. Hickson

All he was missing was some L.A. Gear shoes. Even accomplished dunker Rudy Gay was impressed by it.

Watching this is akin to that scene in American Beauty with the plastic bag.

Never change Perk. Never change. Unless you are change teams in that case...please change quickly.

This one is pretty simple. KD is having to carry the entire offense for the Thunder right now. He isn't getting much help from his teammates or his coach right about now either. Which leads up to...

Two weeks ago the Thunder's bench was giving them an amazing spark and helping to transform them into a dominate team. They now find themselves in a valley and need to desperately find their way back to a peak. Scott Brooks isn't not helping matter with his inability to quickly adapt to live sans Russell Westbrook. They need to fix these very quickly. I know they only have 10 losses to ringing the alarm may seem a little bit like overreacting but the expectations for the team are pretty damn high. I do not doubt Durant's ability to perform well under these high expectations but I have my concerns about whether or his teammates can do the same.