Three musings from the Thunder's loss to the Grizzlies

Here are 3 random musings about the Thunder's loss to the Grizzlies.

Share All sharing options for: Three musings from the Thunder's loss to the Grizzlies

The Thunder's 90-87 loss to the Grizzlies last night had a familiar tone to it, and one that was a reminder of OKC's painful exit in the playoffs last season. Here are some final thoughts I had while reflecting on a game that dropped the Thunder to 5-5 since losing Russell Westbrook for a 2nd time this season.

1) The Thunder's final play was a good one and the right one.

One of the frustrating things about how OKC went down in the playoffs last season was in the way that in every single one of their losses, they had earned themselves a shot to win at the end of a single possession game. Each and every time, they couldn't close the deal. Often, it was Kevin Durant who was taking a contested shot, and as he wore down, his shooting percentages wore down with his tired legs.

That...is a beautiful play read by Durant. Against a top 5 defense and with the reigning Defensive POY Marc Gasol involved, Durant reads it correctly. Gasol is set to cover the 3-point arc off of Nick Collison's high screen, so Durant easily crosses him up. Now into the lane, Durant has 3 options. He can try and finish at the rim over Zach Randolph, which would pull his team to within 1 with 15 seconds to go, he can kick it to Reggie Jackson who is being covered by Mike Conley, or he can toss it to the corner to Serge Ibaka, who is wide open since his man Randolph has left Ibaka to protect the rim.

Even as the Twitters exploded that Durant passed up an easy opportunity to score and instead put his trust in an average 3-point shooter, there really can't be any debate about this one. A kick to Jackson was a good play, but he would have had the quick Conley closing on him. The perfect play though? That's the kick to Ibaka, who when he catches it does not have a defender within 20 feet of him and he's in position to attempt what is statistically one of the best shots in the game.

As Grantland's Zach Lowe and others have written in the past, the best shot in pressure situations are not ones taken by your best player, but by the players who are open. Ibaka was open. Wide open. With a clean look at a 3-pointer that could have tied the game.

By contrast, what if this was the Heat and it was LeBron James kicking the ball to one of his shooters? Do we feel any differently if it is Ray Allen that misses the shot? What about Chris Bosh? Norris Cole?

2) The Thunder are suffering from end of quarter miscues.

Perhaps it is just the nature of the odds, but it seems like the Thunder have gotten burned a number of times this season with end-of-quarter sequences where they have botched an offensive play at one end and the opposing team hits a buzzer beater at the other end. 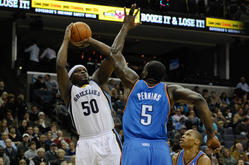 Durant's 37 were not enough as OKC fell to the Grizzlies on the road. Here is our recap.

Last night at the end of the 3rd, the Thunder were looking at a one possession game with Durant at the top of the key with the ball. The Grizzlies effectively trapped him and without any options, Durant forced a long 3-pointer that wasn't close. Conley grabbed the rebound with 4 seconds to go, fired the ball up court to the hot hand in Courtney Lee, and Lee buried a long 2-pointer as the clock expired. This shot was pivotal, as the Thunder found themselves down by 3 points at the end of the game.

We also saw this sort of thing happen in the Thunder's loss to Brooklyn, where Deron Williams scooped up a Thunder turnover and make 40 foot buzzer beater at the end of the 3rd. The Nets went on to win by 2.

Against the Nuggets, Ty Lawson nailed a deep contested 3-pointer with 2 seconds left at the end of the 1st half that pushed the Nuggets' lead up to 9 in a game where OKC went on to lose in a rout.

Against the Trail Blazers, Damian Lillard grabbed a defensive rebound with 4 seconds to go at the end of the 3rd and pushed the ball up to Nicolas Batum, who made a long 2-pointer with under a second to go. Portland won by 4.

It is starting to get weird with opposing teams' ability to hit these quarter-ending buckets. Really though, what it speaks to the Thunder's performance is that they need to do better in stopping the ball's progress in these final seconds. If they let the ball handler get a running start, there's a good chance they can get a clean look at the rim, even from 40 feet away. Stop the ball, and it's a desperation heave.

3) I didn't like the loss, but I loved the effort.

After watching the Thunder sleepwalk through 2 losses to the Jazz and Nuggets, I was almost happy that they were facing the Grizzlies. Even though I knew Memphis would be favored playing at home and with the return of Marc Gasol, what I dig about the Grizzlies is that they make you work. At this point, all I wanted to see was the Thunder compete for 4 quarters.

The Grizz aren't going to run away from anybody, so even with the early deficit I knew the Thunder could stay in the game. They simply needed to reach the 4th quarter, and I knew they would have a shot.

Even as I watched their best chances at tying or winning the game bounce off the rim, I was not too sad about it. The big takeaway is that they DID have shots at the end that could have won the game. The worst thing of all would have been for those shots to not have mattered.