After Thursday night's loss, emotions ran high for the Thunder's players on Twitter....

The Thunder experienced a really harrowing loss against the Nuggets tonight. Kevin Durant played really well, but a subpar performance from Serge Ibaka and straight up bad performances from Reggie Jackson and Jeremy Lamb really killed the team. It was the second blowout loss the Thunder experienced in a row, and only their third of that type this season. The team couldn't be more down right now, which makes the following news all the more unsurprising.

At 1:11 AM Central Standard Time, this picture was posted to Durant's account. 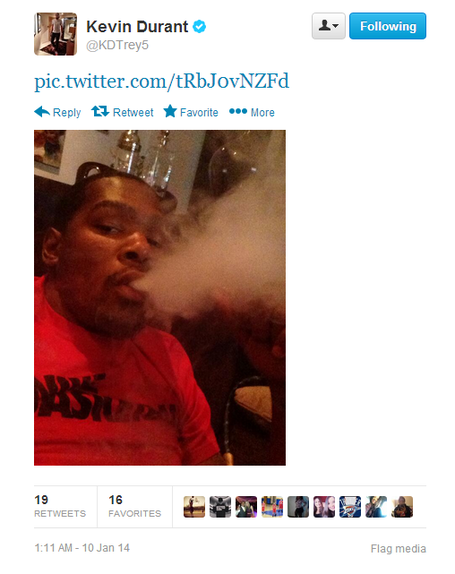 As noted by The Lost Ogle, the fact that KD smokes hookah is nothing new. There's already tons of photo evidence out there, and it's a totally legal activity for an NBA player to be participating in. The only really incriminating thing would be if the photo was of him smoking the reefer. Some might give credence to that theory, given that the Thunder are possibly in Denver right now. But, given that there's a hookah pipe in the background, that's not likely. And even then, who cares?

Still, that's not the intriguing part of the story. Durant later claimed that the photo was put up in order to purposely incriminate him, and was part of a broader hack carried out by someone with malicious intent.

Yoooo somebody hacked my phone though...it's blowing me, not my twitter my phone

Textin my contacts crazy messages, my mom, dad brother..disrespecting them..how can u do that

Obviously it's me smoking hookah, but I didn't post it RT @SamsonBaya: "Sorry y'all my phone got hacked" @KDTrey5 just own up to it fool

We'll likely never know the source of this stife unless KD wants us to, and to speculate about it is pointless. Nevertheless, it is worth mentioning that it happened on the worst night of the season up to this point, and connecting the two dots isn't too much of a stretch.

The drama didn't end there though. Just an hour later, Kendrick Perkins let off some steam. He decided to call out Darnell Mayberry, The Oklahoman's beat writer for the Thunder since they moved to Oklahoma City. The tweet was deleted shortly afterwards.

apparently @KendrickPerkins does not know how to use hashtags pic.twitter.com/lUEAyCO6Kx

It's hard to say what sent Perk off. It wouldn't appear to be anything immediate, since Mayberry's post game notes don't really appear to insult him directly. He does hate on the team to a considerable degree, but he does give the players a chance to respond to his criticism and nothing he says seems outright unfair.

There are other factors to consider. Perk is pretty much a loose cannon, allegedly getting into altercations outside of night clubs, allegedly throwing Gatorade bottles at salons, and allegedly punching someone. That's not to mention the amount of technicals he gets and the emotion he displays on the court. Despite all of that, Perk has shown himself to be a good person in other areas of his life, and is always the first to stick up for and cheer for his teammates. Thus, this pretty much is part of his normal pattern of behavior for him, and probably doesn't indicate anything about Darnell.

However, if you do want to entertain that thought, you could point to a few confrontations that Mayberry has had with Russell Westbrook. About two months ago, when asked a question on why he shoved Nene, Westbrook refused to answer and immediately shut down Darnell's line of questioning. Furthermore, Westbrook wasn't exactly wholly cooperative in the interview he had with Mayberry regarding his third knee surgery. There, he ignored a couple of questions, and was very cryptic about a lot of details.

Again, I might be totally reading too much into it. After all, Mayberry has been probing the minds of KD, Russ, Sefolosha, and Collison for 6 years, and Ibaka and Perkins for 5. There's only so many times you can meet a person before you get into a minor tizzy over something stupid, and then forget about it later. This is especially true when said person follows around your team from city to city, and is there to ask you the question that you don't want to answer after every single loss.

At the end of the day, people are people, and everything will cool down eventually. The Thunder have a nice bounceback game against the freefalling Bucks on Sunday, and there's no better place for the team to regain their Mojo.

UPDATE: According to Nick Collison, the Tweet was sent while Durant was in airport security. The plot thickens.

@Deadspin I saw the tweet come up on my timeline when he was outside the bus going through TSA security. He didn't send it. Very weird.