In the final day of Round 1 action, Bosnia threatens to give Lithuania their worst Eurobasket finish of all time, while the Finnish had a surprise of their own....

Share All sharing options for: Eurobasket 2013 Day 6: The Second Round is Set

Yo! I'm spending a lot of time watching the 2013 Eurobasket, so I thought I'd share some insights with you. Since there's no specific team to follow here at WTLC, I'm going to do a daily look back at what's going on. Consider it the readers digest version of the real thing, with a bit of WTLC flavor sprinkled in.

By the time this game was played, Latvia had already beaten a lethargic Macedonian team. That gave the underdog Bosnian team only one shot to make it into the second round. They would have to beat Lithuania, one of the world's basketball powers, by 10 points or more. Going into the game, it was apparent that they had a chance to win. Bosnia had gotten drubbed in their first two games against Latvia and Serbia, but they made a quick mid-tournament turnaround, beating Macedonia and Montenegro. Mirza Teletovic started to play efficient offense, the team managed to pass more on the whole, and they got a few really key performances from their bench.

Still, no one really expected them to win by 10 points. The team didn't play very good penetration defense, and the jury was still out on Teletovic's ability as the team's primary scorer. 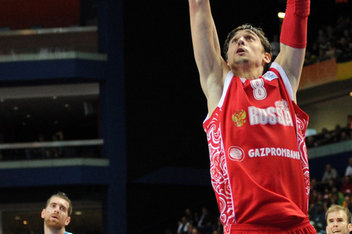 Get caught up to speed in a hurry here!

Oh, how wrong we all were. Teletovic absolutely exploded, and Nihad Djedovic was able to contribute in his own way as well. Lithuania was in disarray. Their coach played all of his players out of their normal rotation, denying them any sense of rhythm. Morevoer, Mantas Kalnietis was having a terrible day from the floor, jacking up way too many threes for comfort.

The game eventually culminated in a fourth quarter explosion from Teletovic, propelling his team to a 16 point lead. The Lithuanian fans in the arena were dead quiet, fearing the nations worst Eurobasket finish in their entire history. Lithuania was able to storm back though, getting it down to their bigs, getting to the line, and letting Linas Kleiza hit a dagger of a three with about a minute to go. Disaster averted.

I was really expecting to see something out of Macedonia here. They had proven capable of beating anybody in the tournament, and this was their last chance to get into the second round. But they had looked horrible against Bosnia, losing their three point shot and completely relying on McCalebb and Antic.

In this game, it was the same story. Antic was the only player who was consistently effective throughout the game. Bo McCalebb was doing well as a scorer, but failing as a distributor and totally stymieing the offense. In the second half, he looked totally lethargic, walking up the floor and losing his man on defense. He was benched in the third quarter, never to return to the game.

On the other end, Latvia had a reasonably successful game. They were able to get a lot of key turnovers, and moved the ball beautifully on offense. As long as they had players in position under the basket, they could score. They did have problems down low defensively though, and it resulted in their players catching foul trouble (Berzins and Freimanis had racked up four fouls before the third quarter ended). But it never ended up making much of a difference, as Macedonia was well out of the game by the end of it. The win sent Latvia to the next round, while the loss eliminated Macedonia.

This was the battle for advancement in Group C. If Croatia won, they were guaranteed to advance. If the Czech Republic won, they had a pretty good chance of advancing. But it wasn't meant to be for the Czechs. They were able to keep up with the Croatians in the first half, using their ability to steal the ball and get out in transition to their advantage. Moreover, the Croatians, seeing their terrible three point shooting ability, played a zone to keep the Czechs away from the basket. The plan backfired, as the Czechs had their best three point shooting night ever.

But Croatia made a critical change in the second half, going with a small lineup. They still committed as many turnovers as ever, but they were able to get back on defense and keep the Czechs from scoring easy points. This killed the Czech offense, as they didn't have a lot of weapons to look to and didn't have a matchup to exploit. Jan Vesely met his match in Ante Tomic, while Tomas Satoranzky had the weight of the world on his shoulders.

But when you really get down to it, one stat stands out. The Czechs were 5-21 from the free throw line. That pretty much says it all.

This was one of the strangest basketball games that I've ever watched. It started out as outright Belgian domination. Sam Van Rossom was able to bury three wide open threes in the first quarter, and Belgium was able to get any player in the post that they wanted. France wasn't playing with a lot of energy, and they did a poor job of defending in transition. At their peak, the Belgians had an 11 point lead.

The French coach responded with a wholesale change, throwing the entire French bench out there. They managed to stabilize things defensively, though they couldn't effectively cut into the deficit. Things heated up in the third when Tony Parker and Nando De Colo were able to play alongside each other. Their quickness factored into the run, as well as Parker's uncanny ability to hit difficult shots.

After that, the French woke up. Diaw was able to create a few shots for himself, and France began jacking up threes. France was playing without Batum, so Belgium had smartly been playing in a zone all game. But France was able to get some help from Antoine Diot on the bench, and before you knew it, a 12 point lead was a 12 point deficit, and the French had cruised to victory in the fourth. Both teams are guaranteed advancement into the second round, but Belgium will begin at 0-2, while France will begin at 2-0.

I didn't get to see this game, but it just represents how muck Petteri Koponen means to his team. When he's having a great night, his team can beat anybody. Shockingly, Finland will go into Round 2 at 1-1.

In terms of the standings, none of these games ended up meaning anything. Some represented lost opportunity, others were simply between two teams whose fate was chosen for them. Regardless, here's the scores:

Highlight of the Day:

Listen to this Bosnian commentator almost burst into tears over the terrific threes from Mirza Teletovic. I'm fairly sure there would be mass parties going on in Sarajevo if Bosnia has actually managed to pull this off. You gotta love it when you can feel such passion from a fanbase, and the people who commentate on the games. You know, like Thunder fans and Brian Davis!

You can find full the full standings and schedule of the second round here. Games start on Wednesday and last for 6 days, at which point the single-elimination tournament begins.

Note on Future Updates: I will be travelling to Ljubljana on Wednesday to see some of the games in person. Thus, there will be a short interruption in coverage while I'm en route, but it will resume in a few days, and I will definitely be on top of the tournament. You can also expect a lot of notes on the atmosphere and culture of the area, as I make my transition from Taco Bell to Taco Desert.