The Spurs' loop play which they run so well for Tony Parker might be a good fit for Russell Westbrook, who is similar to Parker in a lot of ways. Let's take a look at how they might run their own loop play.

Over at BBallBreakdown, Coach Nick has been breaking down plays using his own players to reenact live sequences by NBA teams. He recently broke down the San Antonio Spurs' 'loop play,' which they use to create easy scoring opportunities for Tony Parker. The gist of the play is that Parker engages the offense, passes the ball off to a second ball handler at the top of the arc, then "loops" around three screens to throw his defender off and get open on the opposite wing. Watch Coach Nick break it down for us.

This play works so well because of Parker's speed, ability to finish at the rim, and his comprehensive knowledge of the Spurs' offensive system. If the defense can't keep up with Parker, he gets an open jumper or an easy lane to the rim. If the defense tries to adjust with help defenders, they have to make sure that their rotations are perfect, and with all of the ball movement, keeping track of who's rotating where can become very hectic. Watch this video to see how the loop play can lead to scores in different ways as defenses try and make adjustments to account for Parker's loop cut.

Coach Nick insists that the Spurs are the only team in the league that presently use the loop play. For the Thunder, however, it's interesting to consider how the loop play may work well for Russell Westbrook. Like Parker, Westbrook has explosive speed speed and he gets to the rim better than anybody else in the NBA. Putting him in a play set that: a) maximizes Westbrook's speed, b) gives him space to work, and c) gives him multiple passing options would enable him to thrive, taking advantage of his attributes and leaves with him the option to shoot, score at the rim or drive-and-kick the ball.

At present, we rarely see Westbrook cutting away from the ball. Only 167 of his 673 made field goals from last season were assisted on (24.8%), according to NBA statistics, and a large number of those were simply in spot-up scenarios where the opposing defense got sucked into a Durant isolation. Simple give-and-go's made up the majority of Westbrook's off-ball cutting game.

With that said, the Thunder did run some "Horns" action at times last season. If you are unfamiliar with the "Horns" set, Coach Nick does a good job of breaking it down. The Thunder ran a "4-down" variation, which saw Serge Ibaka on the strong side low block and Kendrick Perkins as the lone high post big. It generally worked well between Durant getting the ball up top or Westbrook slipping his screen and going to the rim, although Perk isn't exactly the best passing big around.

Also buried among the video archives, I found this clip below. I can't imagine that this play was run more than a few times all season long, but it demonstrates just how well Westbrook's speed works with multiple screens thrown in. He gets two screens across the high post here before going backdoor, but you can see that there's not a body around him and it results in an alley-oop opportunity.

If the Thunder wanted to incorporate their own version of the loop play into their playbook, they could conceivably do so by modifying their horns set a bit to accommodate it. First, look at the formation of the Thunder's horns set, then compare it with the Spurs' loop formation: 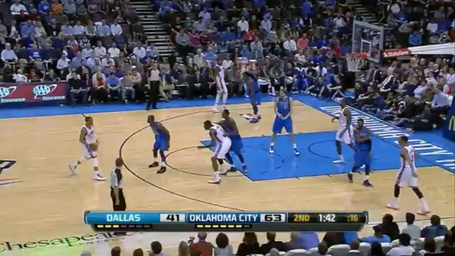 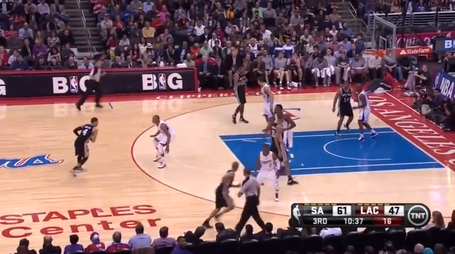 It's not the exact same thing, but with a few adjustments, it's pretty similar. Ideally in the loop play, Perk would be a little higher up for better spacing when he gets the ball. The rest of Thunder players would all have to move themselves a little bit to get into better screening position (Thabo moving higher up to the wing, Ibaka closer to the low block, Durant coming in closer to the short corner/elbow).

While Westbrook normally would cut to the weak side in horns sets, he would probably go to the strong side past Perkins in the loop play. In fact, there are a number of ways that they could create this scenario If not the basic pass-and-cut from the horns set, then the Thunder could use, for example, a pick-and-pop that has Westbrook dribbling to the wing and Perk to around the top of the arc.

From there, Westbrook can run past Sefolosha, Ibaka and Durant (or whoever is in the floor at that time). After getting the ball on the wing, he's in position to shoot, drive or make the extra pass against the help defense. Excuse the rough artwork, but it looks something like this: 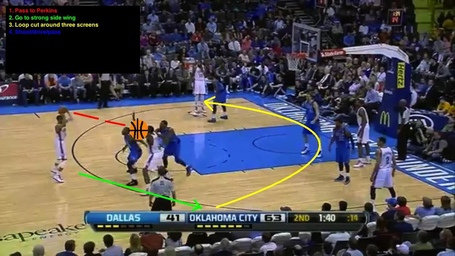 (I had more fun with this than I'll admit)

Like we saw in the Spurs breakdown at top, there are a number of options that open up. You might notice that, after that loop cut, the play becomes somewhat similar to the Durant-Westbrook pick-and-roll as it happens on the weak side with a lot of open space. After Westbrook gets the ball coming off of that third screen from Durant, the play could definitely turn into pseudo-pick-and-roll action with Westbrook driving or pulling up and Durant popping out or rolling.

Alternatively, if the Thunder want Perk as the third screener and Durant up top, they could flip-flop the two with a dribble pitch somewhere on the wing before or as Westbrook begins his loop cut. That way, the play becomes layered as Durant can claim the scoring opportunity for himself off of the dribble pitch or continue to run the play for Westbrook. It doesn't even have to be a horns set, and Durant could simply do the "zipper cut" as the Spurs do in their loop set (player cuts from the rim straight to the top of the key) to be the ball-handler up top as Westbrook makes his loop cut (this could also simply become an isolation opportunity for Durant).

Another variation could involve Serge Ibaka. Ibaka could be the big up top. Since Ibaka is such a strong spot-up shooter, he would have to be guarded tightly. Depending on the spacing of the screeners, this play could become an option play where Westbrook can get the ball off of a backdoor cut or continuing running the route to complete the loop play. There are a lot of different ways this play can be adapted for the Thunder, and with the talents they have, they have the ability to keep the defense guessing before OKC's actual play begins to unfold.

The only caveat in this analysis of course is Westbrook's relative inexperience as an off-ball cutter, as compared to Parker. So much of what Parker does when he is running off-ball is reading and reacting to the defense, and he then depends on his high IQ teammates like Tim Duncan and Manu Ginobili to read the same thing and react accordingly. Parker knows when to go over the screen versus under it or cutting back to the strong side with the same screen, and his teammates know what Parker is doing as he does it. This type of team chemistry can only be forged over seasons. Westbrook is now entering his sixth season. He has shown an ability to improve each season, so now is the time for him to branch out from being a player who is only dangerous when he has the ball in his hands.

Maybe it's wishful thinking for Scott Brooks to incorporate this type of play into his playbook, but the NBA certainly is a copycat league, and the Spurs are a team worth copying. In the same way that the Thunder have incorporated the Durant-Westbrook pick-and-roll after seeing the Heat use the LeBron-Wade pick-and-roll to success, let's watch to see if the Thunder try to take a page out of the Spurs' offensive playbook next.