The Oklahoma City Thunder bench: a look at the bottom third of the roster

A look at the players that might sneak into the back end of the rotation, including the veterans, the rookies, and the potential roster cuts. What are the expectations for Derek Fisher, Perry Jones III, and more?

Share All sharing options for: The Oklahoma City Thunder bench: a look at the bottom third of the roster

We've taken a look at the heavy-hitters on the Thunder bench: Reggie Jackson, Nick Collison and Jeremy Lamb. For a star-centric team like the Thunder, having two or three impact players off of the bench will do. Kevin Durant and Russell Westbrook will carry the load as always, and the Thunder have done well to surround them with capable players while avoiding the luxury tax.

After Jackson, Collison and Lamb, the Thunder carry a bunch of young and unproven players with upside as well as a few low-end veterans playing on minimum contracts. Not many of these players can be expected to be impact players on a nightly basis, and it's unlikely they all make the final roster (16 players signed at the moment), and there could be multiple cuts. You never know how the dice could roll, however, and there certainly are some intriguing players among the bunch. Let's take a look.

With Reggie Jackson and Jeremy Lamb settled in as two of our top bench players in the backcourt, it might seem unlikely for there to be a fifth guard that could make an impact in the rotation. That said, we know how it is between Fisher and coach Scott Brooks. For better or for worse, Brooks has insisted on playing Fisher an awful lot over the past two seasons.

Jackson, Collison, & Lamb; who will step up? 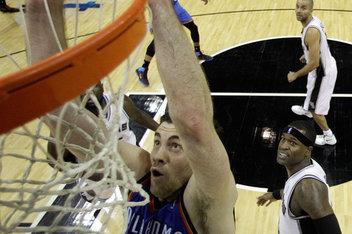 OKC will need big contributions from an unproven bench this season. Who will lead them?

Fisher's minutes should rationally be on the decline this season. It's his last season, and Jackson and Lamb look ready to take on most of the responsibility as guards off of the bench. There still could be a role for Fisher, however. In our depth chart overview, I pointed out the likelihood of small ball lineups for the Thunder this season given their roster makeup. Even as the fifth guard on the team, Fisher could definitely find his way on to the court in those lineups. Brooks loves Fisher for his toughness and his veteran leadership on the floor, and even as a liability defensively, it wouldn't at all be surprising to see him get fed playing time again.

Fisher has generally seen 15-20 minutes per game with the Thunder. It's hard to see him playing quite that much this season, but he could still get close to the lower end of that spectrum. Betting on Brooks playing Fisher isn't a bet all that hard to make, and even at 39 years old, he could still make a decent impact through his three-point shooting (and his world-renowned flopping?!).

Here's an interesting player: Perry Jones III, the 28th overall pick in last year's draft, is entering his 2nd year in the NBA. There was a point where PJ3 was considered a likely top-5 pick (even topping a handful of mock drafts for a very brief amount of time), but he struggled in his last season at Baylor and was red-flagged over concerns regarding his knee. Jones spent last season bouncing between the D-League and the end of the Thunder bench.

Jones has a very interesting skill set that spans across a lot of different areas of the game, but he doesn't really have any one skill perfectly polished. He's got an outstanding athletic profile with nice ball-handling skills and decent touch on his jumper. However, for all of his talent, he's appeared to be simply average thus far. The potential is there, but a pessimistic point of view could be that he's just a jack-of-all-trades, master of none, that never finds his niche in the NBA.

It's up in the air whether or not Jones is ready to produce, even in a minor role, for the Thunder this season. He'll be behind Nick Collison on the depth chart, and might end up back in the D-League. If he can turn in a nice training camp/preseason, he might be able to snag an end-of-rotation role as a utility player capable of playing multiple positions. From there, he can work on further refining his game. A best case scenario might mean something like what Earl Clark did last season for the Lakers–a breakthrough performance following injuries (or some other situation than would put him into extended playing time for even a brief amount of time). With massive upside but also very little established in his game, PJ3 could be an interesting player to keep an eye on this season.

Hasheem Thabeet played 11.7 minutes last season, and that 10-12 minute role as the backup center should be available for any of these three centers to grab in training camp. It really is a crapshoot, and hardly any of them are standout options. Steven Adams still has a long way to go in his development, and both Thabeet and Orton, former high-upside project centers like Adams today, have been given up on by most of the league already.

The smart money might be on Adams, the 12th overall pick this year, to grow into the role. Given the relative lack of a standout talent, the Thunder might choose to play the one with a fresh slate in his development. Adams' offensive skill-set basically ends after open layups and he's not a great rebounder, but fortunately, that's not what the Thunder need from him. Defense is where Adams shines, as he's strong, mobile and athletic–a great combination of traits. He can defend the pick-and-roll, challenge shots at the rim, and has the physical stature to challenge players in the post. There will still be a learning curve for him on defense, but he should already be a decent defender to plug in the middle.

Neither Thabeet nor Orton have really impressed since they came into the NBA. Thabeet has long adopted the bust label since being drafted second overall in 2009 by Memphis, and Orton hasn't done anything since being drafted by Orlando with the 29th overall pick in 2010. Both were viewed as long-term projects from the start, but neither have realized all that much of their potential. Thabeet was bearable in his minor role last season, taking advantage of his height on the boards and on defense (9.1 rebounds and 2.8 blocks per 36 minutes). Orton appeared in just 13 games last season, but had a strong Summer League (12.0 points on 66.7 percent shooting, 5.0 boards and 1.7 blocks in 18.0 minutes per game). It is worth noting that both Thabeet and Orton both have non-guaranteed contracts and could be waived.

Based strictly on which of these big men is best right away, there's no clear answer on who may end up claiming the role. As excited as Thunder fans may be for their newest draft pick, it's not unreasonable to believe Adams might be far behind enough that the team may be better off stashing him in the D-League this season. Thabeet and Orton will have training camp and preseason to impress the Thunder, and while Thabeet likely has a foot up on Orton, the Thunder certainly won't rush into making their decision early with these players.

One more position battle exists between a trio of players on the end of the roster, though this one could end with one or two training camp cuts. These players are fighting more for a roster spot than they are for a rotation role. While there's no distinct backup small forward, there likely won't be a true small forward used off of the bench this season behind Kevin Durant. Thabo Sefolosha and Jeremy Lamb will probably play there in three-guard lineups, with Perry Jones III possibly tossing his name into the hat as well.

Andre Roberson was picked 26th in this year's draft and he's very much a work in progress. He's extremely raw offensively, lacking a consistent jump-shot and the ability to put the ball on the floor. Like Adams, he's more of a defensive prospect–Roberson is capable of guarding three positions due to his combination of length, mobility and athleticism. Roberson is a bit of a tweener between the two forward positions, but it really comes down to defensive matchups rather than fitting him into a role offensively. As a bonus, he is a ferocious rebounder, belying his size. The D-League is a likely possibility for him this season as well as he learns the NBA game.

With 16 players signed on the roster, Liggins and Gomes might both be fighting for the final spot on the roster. Liggins saw a bit of trust from Scott Brooks last season, coming off of the bench often to play a handful of minutes in both the regular season and the playoffs. He's a scrappy defender with a developing jumper, and this season will be just his third in the NBA. However, he got arrested on battery charges on Saturday, which could set him back to the point of being a potential roster cut. Gomes signed to an non-guaranteed contract this offseason after being relegated to Germany last season. He's a solid 3-and-D player, with a nice mix of toughness and finesse to his game. However, it's hard to say what he still has left in the tank at this stage in his career.

Regardless of who wins this particular position battle, it's unlikely they'll do much more than reprise Liggins' role form last season (7.4 minutes per game over 39 games). They'll most likely be niche players brought in for specific defensive matchups or garbage time, unlikely to see extended playing time barring a number of injuries. The most interesting aspect of this battle lies in seeing which players make the regular season roster.