Croatia and Lithuania were able to cruise, for the most part, over Ukraine and Italy. Meanwhile, Slovenia qualified for the 2014 World Championship over Serbia.

In this game, Ukraine gave one of the gutsiest performances that I've ever seen out of a team at this tournament. You could tell that they valued every possession, every shot, and every defensive stand. It's easy to say that about a team that loves to bang in the post, but Ukraine was really out of their league in this game. Sure, they've got a few prospectively good big men, a long range shooter in Sergii Gladyr, and a upper echelon scoring guard in Pooh Jeter. But when you compare the talent level of this team to the others that made it this far, Ukraine is a definite step down.

And I really hate to fall back on this old adage, but Ukraine really lost the game on sheer talent level. They did all of the right things. All of their shots were well calculated. Their large size and ability to protect the paint kept Croatia away from the basket and out of the bonus, for the most part. They got into the paint with their back to the basket players, grabbing offensive rebounds and only relying on Jeter when they really needed it.

Spain, France move on to Semi's 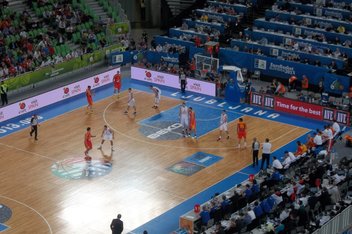 Read more to learn how Spain & France round out the final four.

But when you look at the 10 best points that Croatia scored, there simply wasn't anything Ukraine could do about them. Consider the couple of threes that Damir Markota was able to drain because Ukraine's bigs were too slow. Consider how Krunoslav Simon hit a few shots from way behind the line. Or the few steals Croatia was able to snag in the backcourt, leading to easy fast break points. When you get right down to it, Croatia was just the better all-around team, while Ukraine was covering for a few flaws.

Another thing you've got to look to is the disappearance of Sergii Gladyr. Since his three straight game winning shots early in the tournament, he's pretty much evened out as a player. Tonight, he missed a couple of open threes that he normally drains. In the paint, he was able to grab a few key boards, but he wasn't the offensive force that he usually was, and couldn't draw any fouls. It's also worth noting that Ukraine has been playing eternally on the road. In this, their most important game, I (generously) counted about 20 supporters, compared to Croatia's 7,000.

On Croatia's end, you really have to admire the ability of coach Jasmin Repesa to adjust his strategy. In the early first, after three empty possessions from Bojan Bogdanovic, he called a timeout and quickly changed the focus of the offense, putting the ball in the hands of Simon and Ukic. In the second quarter, his team focused on pounding the paint, getting into the bonus and making a run from the free throw line. In the mid-fourth, he went with a small lineup that was able to more effectively tango with Ukraine's quicker guards, stalling their offense and forcing turnovers.  If that's not enough to convince you of his mastery, consider that he sat in on the Lithuania-Italy game, which hasn't been standard practice for coaches so far. I have high confidence in his ability to take his team all the way, especially if Krunoslav Simon and Damir Markota were able to come away as the top performers in their first game.

Italy has always seemed like an incomplete team to me, and one that's really frustrating to watch. They're basically a bunch of drive-first guards mixed in with a couple of defense-first centers. This can work a lot of the time, especially when they're getting steals in the back court and are hot from behind the three point line. But when they're having ballhandling problems and can't shoot the three worth a lick, the parade of scoring becomes a parade of iron, and they can fall behind rather quickly.

But for me, their offense wasn't what lost Italy this game. Basically, Lithuania matched Italy's style of play. Lithuania only played three bigs, and had only one big on the floor for roughly half of the game. Ksistof Lavrinovic, Robertas Javtokas, and Mindaugas Kuzminskas were all almost completely confined to the bench. In fact, Lithuania went Italy's route even further and didn't even play a point guard, refusing to play Delininkaitis. Instead, Mantas Kalnietis and Jonas Maciulis shared ballhandling duties. For all intents and purposes, the teams were mirror images of each other.

So why, then, did Italy lose? Well, if it weren't for a few almost totally meaningless shots by Belinelli at the end of the game, you'd see his 5/13 statline. He was often looked to when an initial play didn't work out, and came up with a lot of terrible shots and empty possessions. You can also look to Gigi Datome, who took too many jumpshots and was never able to get it going in the paint, meeting his defensive match in Donatas Motiejunas. Lastly, you've got to look at Italy's sheer amount of turnovers. Lithuania certainly wasn't constantly pressuring, but they were able to force a ton of backcourt steals that probably shouldn't have happened.

And I'm not even finished yet. Despite all of this, Italy absolutely wasted two free possessions in the final seconds, caused by a steal and two missed free throws. The turnover resulted in another subsequent turnover, and the two missed free throws resulted in a missed layup. Had they been able to convert on those final two plays (or indeed, any play in the first four minutes of the fourth quarter) they would have had a real chance to win.

From Lithuania's perspective, it felt like they were this close to suffering another Macedonia disaster. They had a hard time moving the ball around, as always, and had a hard time closing out a game against a flawed team. Plus, despite their small size, they still didn't have a legitimate day from three. I might sound overwhelmingly negative about Italy and Lithuania right now, but they turned out a really sloppy game, and I have my doubts about either of them being able to win their next contest.

I wasn't able to catch this game, but I didn't really miss much. Slovenia absolutely ran away with the game after the first few minutes, and punched their ticket to the 2014 FIBA World Championship in Spain. Krstic was shut down by Begic early, while Slovenia caught fire from three and played some really intense defense. It's always hard to judge a game where both teams have a less than 24 hour turnaround, but this same Serbian team dropped their Olympic qualifying game in a similar fashion to Lithuania last year. Right now, they're looking like world class chokers.

What did you think of tonight's games? Let us know in the comments!