SB Nation Theme day: "Bring 'em back;" who should the Oklahoma City Thunder bring back from Seattle Supersonics history?

Today, SB Nation asks the question, "which past Thunder player in his prime would you most like to bring back?" WTLC looks to the past.

Share All sharing options for: SB Nation Theme day: "Bring 'em back;" who should the Oklahoma City Thunder bring back from Seattle Supersonics history?

The NBA season is finally (FINALLY!) around the corner and as we wind down this off-season, SB Nation's basketball crew is signing off with their final theme day. Today's theme digs back into team history and considers which player, in his prime, we'd most enjoy seeing in a Thunder uniform today.

Ordinarily, this would be a delightful trip down franchise memory lane. However, when we're talking about the Thunder's history, things get a bit dicey. Either we look at the past 5 years of the team's time in OKC, or else we have to cross the streams and consider the Seattle Sonics' history as part of the Thunder's. Here is my solution, because frankly, aside from Jeff Green, there isn't anyone from OKC's short past that triggers any sort of nostalgic response from me. Therefore, I'm going to borrow (yes, borrow, not abscond!) from Seattle's history and choose my five favorite Sonics players whom I would love to see dressed in the Thunder uniform. While I understand that this might trigger an emotional response from various parties, for me it's simply a chance to walk down memory lane and remember some of the most influential Sonics in NBA history.

One of the great things about a number of Sonics was that they had great nicknames. Perkins, nicknamed "Big Smooth," enjoyed a notable 18 year NBA career that included stops in Dallas, Los Angeles, and then later Indiana. Perkins was a part of the 1982 Tar Heels championship team that featured Michael Jordan and James Worthy. While Perkins had 3 shots at an NBA title with 3 different teams (Lakers, Sonics, Pacers), he never managed to win a ring. Never-the-less, the big left-handed shooter compiled a solid career where he often was a key bench player on very good teams. 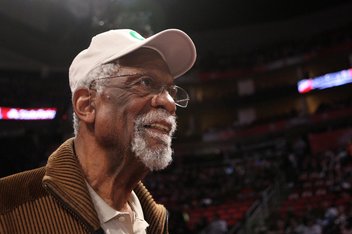 SB Nation's writers answer the question, "Who would you bring back from team history?"

How would he fit into OKC? I think he would have found a rotational spot very easily. Perkins was used to being on star-studded teams that included the likes of Magic Johnson, Shawn Kemp, and Reggie Miller, so he did not need the spotlight to contribute. Coming off the bench, Perkins would fill much-needed 3-point shooting, defensive rebounding, and veteran leadership that OKC's young bench needs these days.

Detlef had without a doubt one of the worst haircuts in NBA history, but don't let his box-head 'do distract you from Schrempf's multi-faceted game. At 6'9," Schrempf was one of the early big men who also possessed a deft outside touch and had range out to the 3-point line. He fit in seamlessly with the teams he was on, never demanded a lot of touches, but still managed to produce multiple 19 PPG seasons while only taking up 12-13 shots per game.

This is the reason why I think he'd make a ton of sense on the Thunder squad. Schrempf would be equally happy in the starting lineup or coming off the bench and would understand how to fit into the Thunder's overarching plan. Whatever the Thunder 2nd unit woes that exist today, Schrempf would go a long way toward fixing them.

I have watched Allen's career play itself out since the very beginning when he was a sharp-shooting Connecticut Huskie who battled against the likes of Allen Iverson and John Wallace. He was part of the last memorable Bucks teams, and then became one of the best Sonics players in history before being part of the trade that brought the Sonics Jeff Green and helped pave the way for the Kevin Durant era.

Of course Allen is still enjoying his lengthy and influential career as the all-time NBA 3-point leader, most recently seen knocking down one of the most clutch shots in NBA Finals history. He now has 2 championship rings and shows few signs of losing his groove. Yeah, he'd be nice to have these days. I could watch him do this for hours.

Kemp, the "Reign Man," was a precursor to the next-gen players who jumped straight out of high school into the NBA. He set the stage for uber-athletic guys like Kobe Bryant, Amare Stoudemire, and LeBron James. He was something special in a way that words can't describe, and had without a doubt the best post-dunk poses of all time. Just watch.

If he were on the Thunder, he would make Serge Ibaka redundant, but that's not such a bad thing when you realize that Kemp could do anything that Serge can do, only better and with more flare. He would have fit in well with Russell Westbrook leading the fast break.

The reason why he misses out on #1 is because Kemp's eventual downfall was his own sense of his place in the upper echelon of NBA players, and when Seattle didn't recognize it, Kemp left town, fell out of shape, and his career went downhill quickly. If nothing else, the Thunder ethos is about hard work and dedication to the team concept, so despite Kemp's otherworldly talents, I wonder if his mental acuity might have hindered him and he would have sought to play elsewhere when realizing that OKC is a Durant & Westbrook town.

Even so, Kemp would have brought the house down in the 'Peake.

"The Glove." Recently inducted into the Hall of Fame, Payton is as renowned for his infamous trash talking as his tenacious defense and his being the point of attack on those great Sonics teams of the '90's. His play speaks for itself.

Why do I think he'd fit in well with the Thunder? Don't we already have an All-Star point guard in Westbrook? I honestly think that the two of them could share the backcourt just fine. While both had high volume shooting years when they have put up big scoring numbers, Payton showed admirable ability to scale his offense to whatever his team needed, especially during the first half of his career. He was about as good an assist man as Westbrook is, not a natural passer but a willing one when he knew where to get the ball to on the court.

What I like the most though is the idea of Payton teaching Westbrook how to really change the complexion of a game through point-of-attack defense. Westbrook has the size, strength, and speed to influence the game the way Payton did, but is still learning how to do it. Put him next to Payton though, and you have two 6'4" strong, quick, ornery guards who would want to chew up opposing offenses. Payton would also have no problem checking either Tony Parker, Chris Paul, or LeBron James.

Those are my Sonics guys. What do you think?